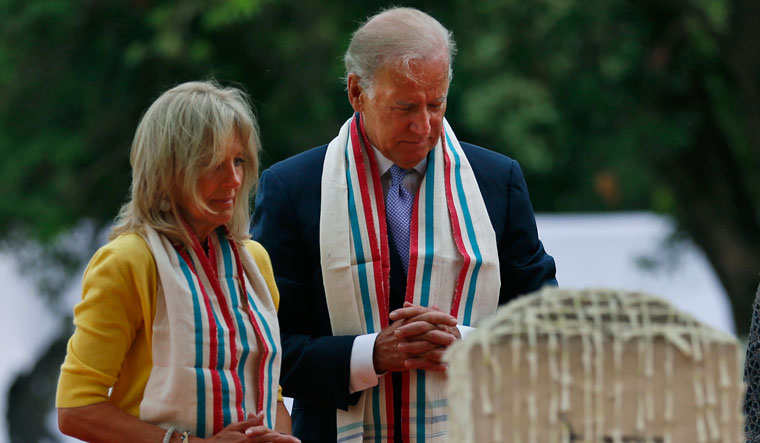 Warm tribute: Joe Biden and his wife, Jill, pay respects to Mahatma Gandhi during their trip to India in July 2013 | AP

It was a humid summer day in 2013. Joe Biden, then vice president of the United States, was speaking at the Bombay Stock Exchange. “I am absolutely confident in the future of this relationship,'' said Biden. “My confidence is based on the history of the journey of both our countries.” Biden has always been bullish about India-US relations. Back in 2006, as head of the senate foreign relations committee, he expressed hope that by 2020, India and the US would be the two closest nations in the world.

When Biden steps into the White House on January 20, he will have a chance to realise his dreams about India. His secretary of state nominee, Antony Blinken, has made it clear that India will be a “very high priority’’ for the new administration. Blinken has been part of Democratic administrations since the days of president Bill Clinton and has dealt extensively with India.

There is a lot at stake, especially because of the growing threat of China. There is bipartisan consensus both in America and in India on the issue. “Since 2013, under Xi Jinping, China has shed its 'hide and bide' strategy for a more strident global posture,’’ writes Anubhav Gupta, associate director of the New York-based Asia Society Policy Institute (ASPI), in a report on how the Biden administration can advance ties with India. “The new approach has pushed the United States and India away and increasingly into each other’s arms.” The US has helped India during its ongoing standoff with China by providing geospatial data, satellite maps and protective gear. “A lot of it starts and ends with China,’’ said Harsh Pant of the Delhi-based Observer Research Foundation about India-US ties.

Blinken said the Trump administration had erred by not taking along American allies while dealing with China. “We need to rally our allies and partners instead of alienating them to deal with some of the challenges that China poses.” India hopes that the Biden administration will quickly cobble together a club of nations to tackle the challenge posed by China.

The fundamentals of the India-US relationship are strong. Bilateral trade has grown from $60 billion in 2013 to $90 billion in 2019. The 2+2 dialogue has been institutionalised. Defence ties, too, have improved. The two countries conduct regular military exercises. The tilt towards India is also evident from the American decision to rename its Pacific Command as Indo-Pacific Command. The setting up of the quadrilateral security dialogue (Quad) along with Australia and Japan is another example of deepening geostrategic ties between India and the US. The two countries also share a common vision on the perils of climate change.

The farewell speech by American ambassador to India, Kenneth Juster, however, gave a glimpse of the challenges faced by bilateral ties. He warned about frictions and frustrations on trade and investment. “Despite persistent efforts, we were unable to conclude even a small trade package,’’ said Juster. Although Trump's 'America First' policy will be replaced by Biden's 'Build Back Better' campaign, it is important for India to keep in mind that Biden, too, will be keen to make his foreign policy work for American people. “We have reached a point where foreign policy is domestic policy, and domestic policy is foreign policy,’’ said Jake Sullivan, Biden's national security adviser. “And the work that we do abroad fundamentally has to connect to making the lives of working people better, safer and fairer.’’

This change—and a demand from middle class Americans to see the tangible benefits of foreign policy—will be a challenge for bilateral ties, especially with the world economy being devastated by the Covid-19 pandemic. “This government will be very tough on trade,’’ said Sanjay Pulipaka, senior fellow at the Delhi Policy Group. “It will negotiate hard. Even a partial free trade agreement will be a good step forward.”

This, however, will not be easy. India has been promoting its Atmanirbhar Bharat campaign, which the US considers to be protectionist. India’s plan to re-evaluate the trade deals it is party to has set alarm bells ringing in Washington. Although the Democratic leadership will be more vocal on human rights than the Republicans, free trade is likely to be a bigger issue than freedom of speech.

Russia will be another major challenge. With 60 per cent of its defence inventory being Russian, India needs the Biden administration to go easy on its sanctions regime. Biden has invited Russian President Vladimir Putin to his inauguration, but there is fear that the bureaucracy might adopt a tougher stance against Russia, which will complicate matters for India. “While we appreciate that India has its own historical and geographical perspective, in today’s strategic landscape it may not be optimal to source equipment across a range of suppliers from different countries,’’ said Juster, sending India a clear message.

India will be keenly watching Biden's Pakistan policy as well. Unlike President Trump who claimed that Pakistan offered “nothing but lies & deceit’’, Biden will be more measured in his approach. Biden released a video on August 15 to commemorate the Indian independence day in which he promised to “confront the threats [India] faces in its own region and along its border”. But will that translate into a tougher stance on Pakistan, remains to be seen.

On Iran, India is hopeful that Biden's position might help push the Chabahar port forward. Trump was really tough on Iran, which made private companies reluctant to invest in projects there. But Biden is likely to try diplomacy first. In December, India, Iran and Uzbekistan conducted a trilateral meeting to discuss the possible joint use of the Chabahar port. The arrangement has the potential to be a game-changer for the region. But with the US-sponsored Abraham Accords between Israel and the Gulf states, any major concession to Iran without their approval is unlikely.

While engaging with the Biden administration, India needs to keep in mind that because of the polarised political situation and the challenge of the Covid-19 pandemic, Biden's initial priorities will be domestic. The contours of his foreign policy will become clear only after a while. India, however, will have to be prepared. “Unlike Trump, Biden is a cautious player,’’ said Pant. “He will be guided by the bureaucracy in pushing his agenda. A lot will also depend on him managing the fissures within the Democratic party.”