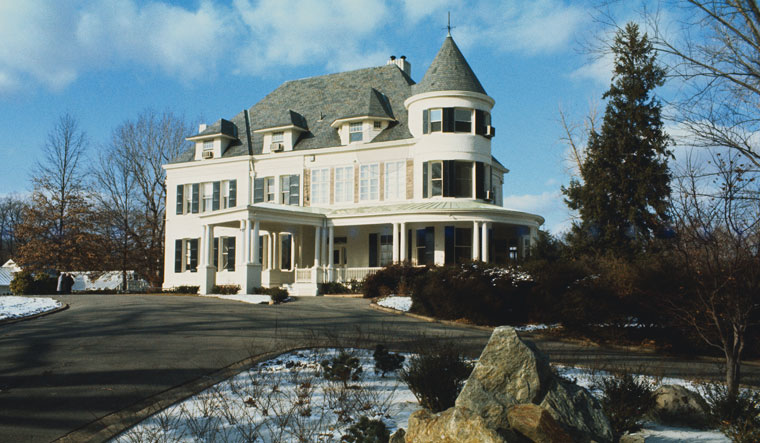 Unofficially official: The "temporary" permanent home of the US vice president. Kamala will be the eighth resident here. Pool, bunker, 33 rooms.... | Getty Images

Shortly after US president-elect Joe Biden and running mate Kamala Harris won the elections, meme designers went overboard. The one that went viral in India was a simple image of the White House with the words Kamala Vilas spelt out in bold, red capitals above the famous Truman Balcony.

Intrigued? Well, here is something to bring you up to speed on the vice presidential trivia.

Considering that the Central Vista project in New Delhi has just been green-lit by the Supreme Court, it is interesting to note that Kamala will be living in a house that is considerably older (built in 1893) than the Indian prime minister’s residence (early 1980s) and even the Rashtrapati Bhavan (1931).

Unlike the White House, the vice president’s home has not had a short name. Joan Mondale, the first second lady to live there, referred to it formally in her recipe book (“Vice President’s House, Washington, DC 20501”). Vice president Dick Cheney typically called it the VPR. Barbara Bush and Tipper Gore simply called it “the house” or “the home”. Rarely is it referred to by its old name: Admiralty House.

The house stands on the grounds of the US Naval Observatory because it was originally built for the superintendent of the observatory. The chief of naval operations fell in love with the house, ousted the super and occupied it in 1923. In 1974, it was designated as the VPR.

The first resident was supposed to be vice president Gerald R. Ford. But then president Richard Nixon’s chief of staff gave him a call, and Ford told his wife, “Betty, I don't think we're ever going to live in the vice president's house.” In a matter of days Watergate claimed Nixon and the Fords moved into the White House.

Ford’s vice president, Nelson Rockefeller, already had a mansion in town; he and wife, Happy, used the VPR only for entertaining. Hence, vice president Walter Mondale became the first resident, and was followed by vice presidents George H.W. Bush, Dan Quayle, Al Gore, Cheney, Biden and Mike Pence. All former residents are alive, except Bush. Kamala will be the eighth resident.

Until 1974, vice presidents lived in their own homes. President Harry S. Truman and wife Bess considerably improved the lives of all their successors, so to speak. He was the poorest US president. As vice president, he lived in a five-room apartment, paying a monthly rent of $120. He did the dishes at home, dropped his daughter, Margaret, to school and waited for the official driver to drive him to and from work. He was the first vice president with a secret service detail—one man. When he retired as president, his finances were so precarious that the Former Presidents Act was passed in 1958, providing lifetime benefits—including a pension—to all presidents who have not been removed from office. And, his five-room apartment is one reason why Kamala will be living in a three-storey, 9,150sqft home with 33 rooms, all set in 12 acres of grounds.

As with every vice president, Kamala can decorate the home as she sees fit. Bush added a horseshoe pit and Quayle a pool. The Bidens added The Family Heritage Garden of the Vice President “which has flagstones representing the vice presidents and their families, including pets, surrounding a fountain”. So, there will be a piece of Kamala and her family left behind in the garden for posterity.

The taxpayer need not worry; all redecoration is funded through The Vice President's Residence Foundation, a non-profit set up by the Quayles.

At the VPR, Kamala and her husband, Doug Emhoff, will be expected to continue the tradition of hosting fun events (the Bidens held water-gun parties!) and formal events to support worthy causes.

Emhoff will be the first second gentleman in American history. The couple will be accompanied by Emhoff’s children from his first marriage—Cole and Ella. In a piece she wrote for Elle, Kamala said that they were named after jazz legends Ella Fitzgerald and John Coltrane.

A graduate in psychology from Colorado College, Cole lives in Santa Monica and works as an executive assistant for Plan B Entertainment—which is reportedly owned by actor Brad Pitt. Ella is majoring in apparels and textiles at Parsons School of Design in New York. Her website, ellaemhoff.com, is being redesigned (by… um… Homer Simpson, according to the homepage).

A partner at DLA Piper Law Firm, Emhoff has announced that he would be stepping down from practice to focus on his role at the White House. Like the incoming first lady, Dr Jill Biden, Emhoff will be also teaching—entertainment law disputes at Georgetown University Law Center.

The family has a tradition of cooking together on Sundays, with Kamala presiding, Emhoff playing the sous chef and the kids helping with prep. That privilege might be lost as the VPR kitchen is handled by navy stewards. 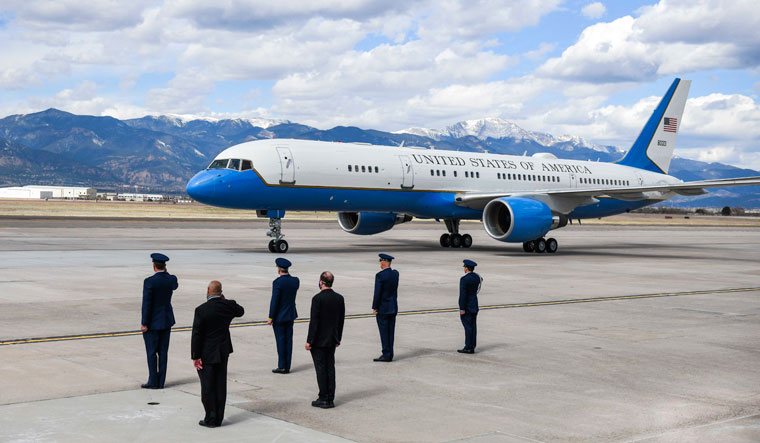 Kamala might actually get to fly in the new Air Force Two. Currently, the vice president uses one of four C-32As of the air force. The modified Boeing 757s also fly the president to destinations with short runways that cannot take the iconic VC-25As, the two Boeing 747s that use the Air Force One call sign.

While the air force has not named the replacement for the C-32As, experts say the most likely platform would be the widebody Boeing 767. According to a 2016 report by the Air Force Cost Analysis Agency, the C-32A’s operational cost comes to around $30,000 an hour.

Kamala will also have access to the White Tops operated by the Nighthawks, officially Marine Helicopter Squadron One or HMX-1. The White Tops are named so for their white-and-military-green livery. They are Sikorskys—either the bigger VH-3D Sea Kings or the newer VH-60N White Hawk. All military flights carrying Kamala will use the call sign Two suffixed to the branch which operates it. So, the White Top will identify itself as Marine Two. 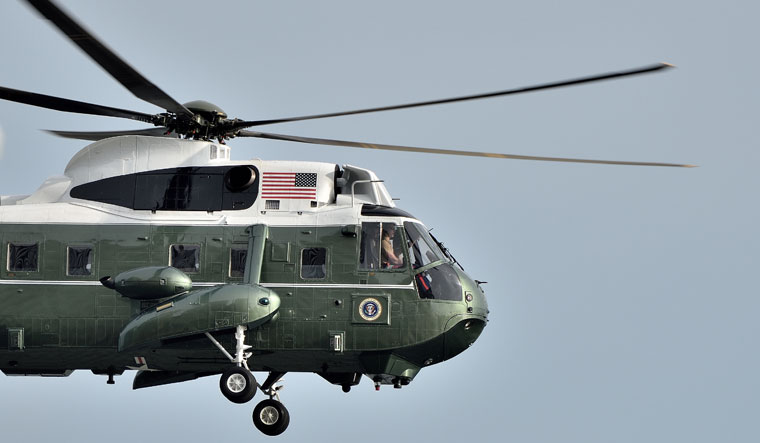 A White Top flown by the Nighthawks

Before she steps down, Kamala will also get to fly in the new generation of White Tops. The US Navy is managing the purchase of 23 VH-92As for the presidential fleet. Videos are already out showing a VH-92A doing test landings at the South Lawn of the White House. The VH-92As are modified versions of the Sikorsky S-92. Closer to home, the Hyderabad-based Tata Advanced Systems makes S-92 cabins, among other things, in a joint-venture with Sikorsky.

Back when he was vice president, Biden had joked to the Wilmington News Journal about the White Tops: “The good thing is you have a whole Air Force. I didn’t realise I get three helicopters available to me. I can be from the vice president’s lawn to my backyard in 40 minutes.” 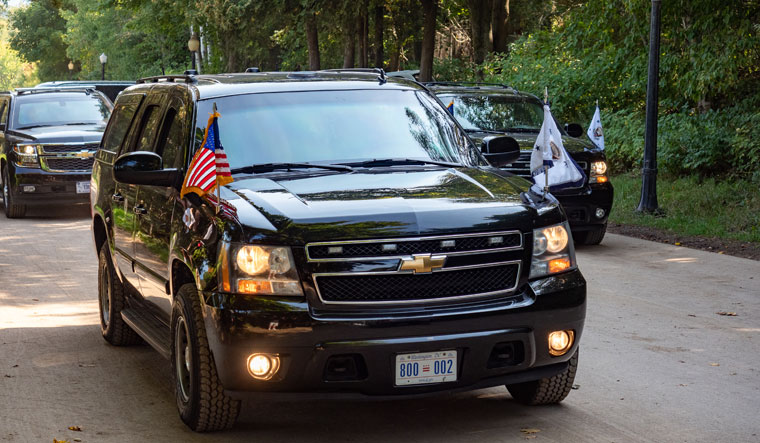 Frankly, not much information is available on the vice president’s motorcade, except that it will travel with Kamala while she goes abroad. Washingtonian.com quoted former Secret Service agent Jonathan Wackrow: “The limo is larger for POTUS; the VP gets the hand-me-downs.” Of course, the limo is still armoured and has the vice president’s seal on the side. It is just shorter, apparently, and with fewer bells and whistles.

Thedrive.com highlighted the increased use of armoured Chevrolet Suburbans by Pence and also “(by) the President (when he) travels across the United States”.

The new version is an 11th generation Suburban with a raised roofline. Apparently the roof modification might be for comfort, making it easy for passengers to alight from the spacious cabin, or it could be to accommodate additional roof armour necessitated by the increased threat of drone attacks. 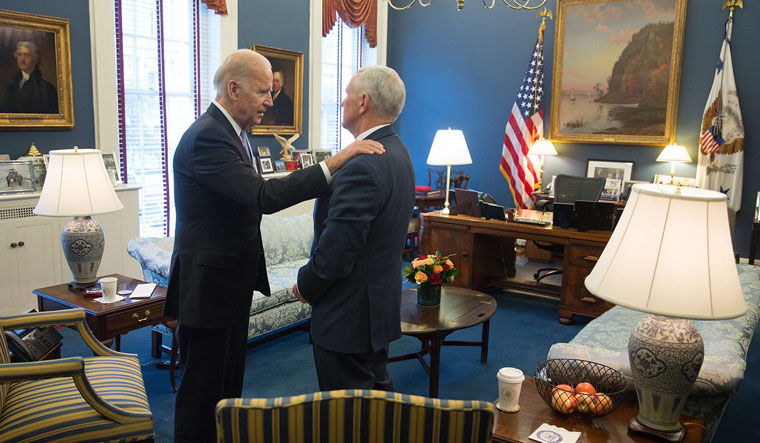 According to whitehouse.gov, “Its walls and ceiling were decorated with ornamental stencilling and allegorical symbols of the Navy Department, hand painted in typical Victorian colours. The floor is made of mahogany, white maple, and cherry, and the two fireplaces are original Belgian black marble.”

In a hat-tip to the age of the building, the office’s chandeliers are replicas of “turn-of-the-century gasoliers… equipped for both gas and electric power—with the gas globes on top and the electric lights below”.

The centrepiece, of course, will be Kamala’s desk. Loaned from the White House collection, it was first used by Theodore Roosevelt in 1902. Later, several presidents chose to use it, including William Howard Taft, Woodrow Wilson, Warren G. Harding, Calvin Coolidge, Herbert Hoover and Dwight Eisenhower. It then went into storage, until vice president Truman asked for it in 1945. It again disappeared and reappeared as vice president Lyndon B. Johnson’s desk, and has served every vice president since then. The inside of the top drawer has been signed by all vice presidents since the 1940s. Kamala will quite likely add hers to that list of famous signatures.

The vice president’s West Wing office is a prestigious one, and apparently it used to be next door to the Oval Office. But, in President Donald Trump’s West Wing, the nearest room to the Oval Office was the president’s study and then came the offices of senior adviser and son-in-law Jared Kushner. According to a sketch by The Washington Post, Pence sat four offices away.

Those in the West Wing have access to other perks such as food from the White House Navy Mess. The archived website from the Obama years says, “Navy Stewards have provided food service to the Commander in Chief since 1880… The Navy’s culinary specialists prepare and serve fine foods in the West Wing. Seated reservations are available to senior officials including commissioned officers, cabinet secretaries and their guests. Staff located in the West and East Wing can enjoy food made in the Navy Mess from a take-out window located adjacent to the dining hall.”

The vice president’s Capitol office will be courtesy of her status as president of the senate, and it is located adjacent to the senate chamber. The room will have special significance considering Kamala’s crucial role in the senate. 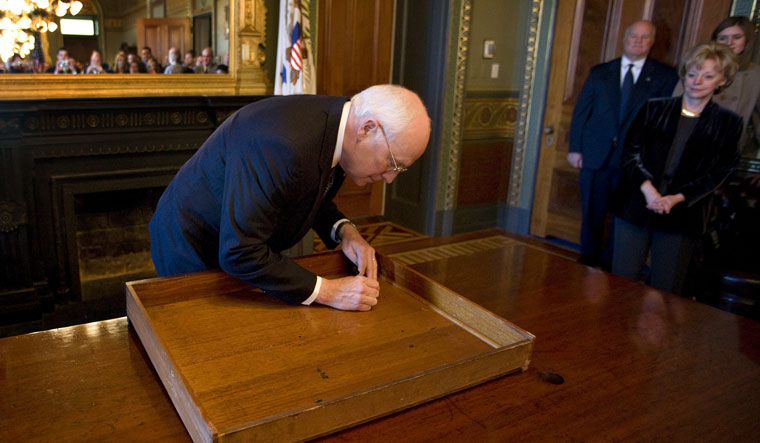 The forever mark: In a time-honoured tradition, Cheney signs the top drawer of the desk in the vice president's ceremonial office | Getty Images

It is a room that has seen much history. For example, author David McCullough wrote in Truman that after receiving a call informing him that president Franklin Roosevelt was sinking, the vice president “ran through the echoing old Crypt, past the Senate barber shop, then up a flight of stairs with brass banisters to his office—to get his hat." This was Truman's last action as vice president.

When Kamala steps down, she will leave one final mark in the Capitol—a marble bust. The Architect of the Capitol is responsible for working with her “to select a sculptor, contracting with the artists with the approval of the Senate, monitoring and approving the work, and designing and procuring the pedestal”.

The president and the vice president may accept any gift that “does not violate conflict of interest or anti-bribery laws, or the Constitution of the United States”. But they cannot receive any gift from foreign governments, without the consent of the Congress. A gift accepted for reasons of protocol or courtesy is handled by the National Archives and Records Administration.

Last year, a $5,730 desk clock, gifted to Pence by the crown prince of Bahrain, was destroyed “out of apparent concern that it could be a secret surveillance device”.

If you are a souvenir hunter, listen up. While the production of Biden-Harris souvenirs is on, most of it is the usual stuff: hoodies, coffee mugs, baseball caps and T-shirts. One thing stands out on The White House Gift Shop—the first Biden-Harris coin. Limited edition of 7,500 pieces. Comes in a velvet presentation case. All yours for $100.