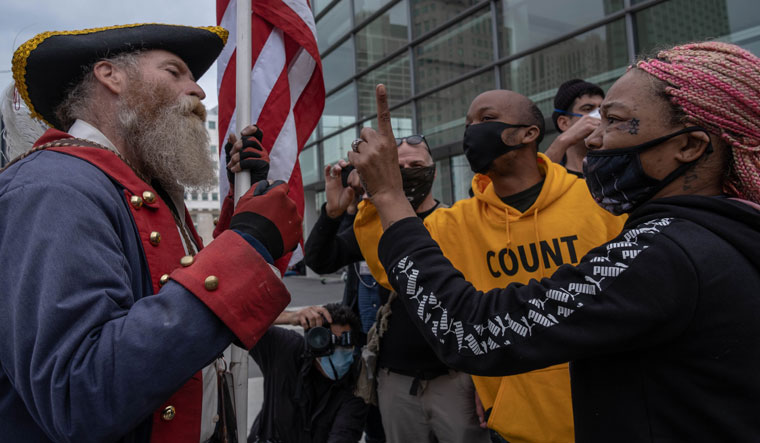 Divide and fool: Trump detractors argue with one of his supporters in Detroit, Michigan, on November 5 | AFP

The US election did provide one clear result: America is as deeply divided as it has been since the Civil War. The presidential outcome was so close in so many states that a final decision might take weeks and be mired in Trump-style litigation that might return an unpalatable outcome. There is one thing that is certain, though. Whoever wins will preside over two Americas, one red, one blue. No stars. No stripes.

They are exhausted from the process, but those two Americas are not in brotherly love. They are siblings at war. Small battles play out on social media each month, long-time friends unfriend each other on Facebook over political differences. Not only do they not want to know each other’s point of view; they no longer want to know each other.

To be sure, this started during the Obama years, but Donald Trump set it on warp speed, accelerating the process to the point that it has rolled back the long and caring process of reconciliation and integration started at Reconstruction. Today, hostility, racism and bigotry are out in the open, and hate and fear are in the air.

In this climate, came the presidential election to save the day, perhaps reconcile the two camps by showing the other just how out of touch they were with the rest of the country. It did just the opposite.

There is a large, some would say irreconcilable, difference between those with a higher education and those without, between rich and poor, suburbanites and country folk, ethnic groups and white males. There are exceptions, but on the bell curve, those differences are the bulge.

Democrats feel that Biden would try to reconcile the two camps. Republicans know who Trump is and they did not care enough to deny him their vote.

Deep and lasting damage is on the surface. For all the “let’s accept the results and move on” attitude in the media and social postings, below the surface there is an addendum, “as long as the results turn out my way”.

Trump has unabashedly shown he is not concerned with constitutional dogma. The US is supposed to be a democratic republic, but Trump seems to just put that all aside when convenient to his purposes, and hypocritically embrace it only when it suits him. On the night of the election, Trump declared himself the winner and demanded the count of ballots be stopped, fully aware—he had to be — that millions of ballots were still uncounted. Charging that the continued count would be a “massive fraud on our nation”, he said he would go to the Supreme Court.

And he did just that. He filed a slew of lawsuits —to continue the counting in Arizona, to stop it in Pennsylvania, to contest votes in Georgia. It is not the legal basis that matters; it is the lawsuit that is the weapon.

The shining example of democracy to the world for more than two centuries, the US has come to this: its president saying and doing what the world has seen from autocrats who swindle their countrymen by the force of threats and rhetoric and reinterpret election results in their favour. Precisely what Americans used to call a tin-pot dictator.

Except that half of Americans today seem to have no problem with distorting facts. They agree Trump is trampling on the democratic norms and institutions that have distinguished the US to the world, and they went to the polls in record numbers, perhaps not showing themselves as Trump supporters, but quietly voting their approval.

“We have claimed, for Electoral Vote purposes, the Commonwealth of Pennsylvania (which won’t allow legal observers), the State of Georgia, and the State of North Carolina, each one of which has a BIG Trump lead. Additionally, we hereby claim the State of Michigan if, in fact… there was a large number of secretly dumped ballots as has been widely reported! Our lawyers have asked for ‘meaningful access’, but what good does that do? The damage has already been done to the integrity of our system, and to the Presidential Election itself. This is what should be discussed!”

Trump’s Victorian-language tweet does not hide the irony of seeking the democratic seal of approval for a process that attacks the democratic process.

Undermining the integrity of the elections is a dangerous thing, for the US and for the world, because the world has long looked at America as humanity’s shining example of how to order its affairs. For Americans, it would shake the foundations of the very political system set forth centuries ago by Alexander Hamilton, James Madison and John Jay in the Federalist Papers, the Bible of America’s democracy.

An essential American principle derived by the seminal federalist essays is that the executive branch of government must be fundamentally democratic at its core. A trustworthy system of elections is what gives its leaders legitimacy and makes the country work. In practice, that has meant the peaceful ritual of voting, the peaceful transition of power and the assumed decency of its leaders, especially in the electoral process, have been integral to democratic life and the legitimacy of authority.

The next days and weeks are crucial to American and world interests. The US is deeply divided and the denouement of this division projected to the world in these elections may cut to the very core of its essence as a democratic republic and its role as a global beacon of democracy and freedom.