An all-out battle for Joe Biden, but it is just the beginning for Kamala Harris 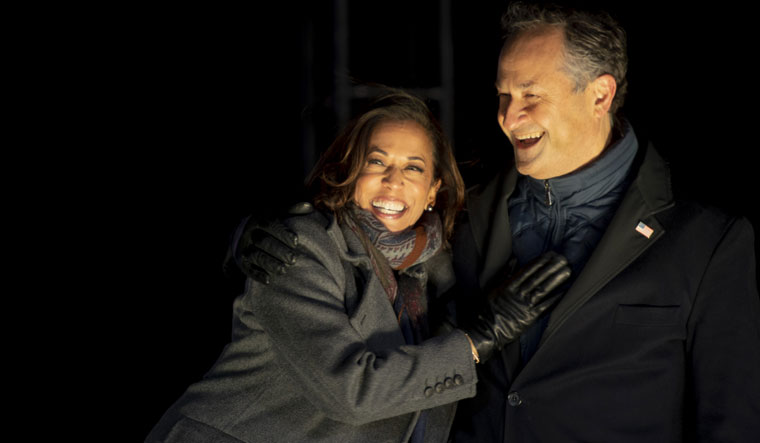 Better half: Kamala Harris and husband, Douglas Emhoff, at a rally in Philadelphia, Pennsylvania | AFP

On election day in the United States, the people of Thulasenthirapuram town in Tamil Nadu’s Tiruvarur district held special prayers for Kamala Harris. This is the ancestral town of her maternal grandfather P.V. Gopalan.

Hopes had risen in their hearts, and across India and America, that Kamala would script history as the first American vice president of South Asian descent. She looked the part throughout the campaign and it was a spirited fight.

Their joint campaign began on August 12, when they walked hand-in-hand on to a podium in a high school gym in Wilmington, Delaware. The weight of history fidgeted over the moment, overshadowing social restrictions caused by the Covid pandemic. It was their first public appearance together, in the former vice president’s hometown, and here he would announce her as his running mate.

Dressed in navy blue, Kamala sported her all-weather “power pearls”. As Biden approached the microphone, she sat crosslegged in a seat behind him, exuding supreme confidence.

Whom Biden would pick as his running mate was as great a matter of public interest as how he himself would fare—the gregarious, all-American, Ray-Ban wearing Amtrak evangelist was prone to gaffe. Who could forget him complimenting the 2008 presidential candidate Barack Obama as the “first clean and nice-looking mainstream African-American”!

Atop the school podium, Biden promised his listeners on camera: “We will rebuild this country once we are elected, God willing.”

God willing…. Biden knew the hand of God rather too well. He had lost a wife and a daughter in a car crash, and a son to brain cancer. This year, he had nearly pulled out of the presidential campaign, with Bernie Sanders outdoing him in every single Democratic primary. He came fifth in New Hampshire, and fourth in Iowa. An endorsement from civil rights activist James Clyburn saved him in South Carolina, which turned the tide. The Almighty had played His hand.

Biden lacked Obama’s amazing grace and power of speech. Clearly, he was no heart-throb of young and left-leaning voters. They saw him represent the centrist wing of the Democratic party. They saw skeletons in his closet and spoke of his “fond” reminiscence of “close” relationships with white segregationist senators like James Eastland and Herman Talmadge. They highlighted his “cosiness with big corporations”—he voted for deregulation of Wall Street (“corporatism”), the 1999 repeal of the Glass-Steagall Act (“at least partly responsible for the 2008 financial crisis”), the war in Iraq (“war-mongering”), the North American Free Trade Agreement (“globalism at the expense of American working class”), and the much-despised 1944 Crime Bill (“putting generations of young black men in prison”).

There were storms of indiscretions. His old staffer Tara Reade alleged that he sexually assaulted her in the Capitol building in 1993. Then came the scandal that his son Hunter Biden had a drug addiction and had wangled a board position at Ukraine energy company Burisma when Biden was overseeing foreign policy at the White House.

After winning democratic nomination, Biden quickly forged unity within the party, drawing socialists to his side. Alexandria Ocasio-Cortez thus became head of the climate change wing of his policy department, and Varshini Prakash of the Sunrise movement one of its members.

Obama had chosen him as his running mate in 2008 for multiple reasons: one was Biden’s vast contacts when it came to foreign policy, which Obama lacked. Biden was always a voice for diplomatic restraint. He was at the heart of the Ukraine crisis—personally negotiating with president Viktor Yanukovych before he fled, and later trying to maintain peace amid warring political factions and, at the same time, keeping a Russian invasion at bay. He went on a charm offensive in Beijing (where he has noodles named after him), but wrangled with Latin America and Israel. He reportedly warned Obama against overthrowing Muammar Qaddafi in Libya and assassinating Bin Laden. He recommended that civil war-plagued Iraq be divided into three federations—one each for Shias, Sunnis and the Kurds. This recommendation was based on his experience in Bosnia.

Kamala had not displayed great respect for Biden’s worldview. She had, in fact, come into the limelight years ago by flaying his opposition to ‘busing’—a way of integrating segregated schools in the US, which the whites opposed. In July this year, a photographer shot a note that Biden held at a news conference. In Biden’s handwriting, the name Kamala Harris was scribbled on top, and under it, a few observations: Do not hold grudges; Campaigned with me & Jill; Talented; Great help to campaign; Great respect for her.

Barely two months before, in May, Kamala had been thrown a question: Will she be willing to consider a Biden-Harris ticket? “Joe Biden would make a great running mate,” she retorted, implying that he can be her vice president.

The biting sparkle in her answers helped her rise in politics. She became San Francisco’s district attorney and California’s attorney general, and entered the US senate in 2016—the same year Donald Trump was elected president.

Hers is a story of Indian American achievers with hard times and heartbreaks behind it. On the Delaware school podium, she spoke about her parents, who met in the civil rights movement of the 1960s. “My parents would bring me to protests, strapped tightly in my stroller. My mother, Shyamala, raised my sister, Maya, and me, to believe that it was up to us and every generation of Americans to keep on marching,” she said.

The media called her the “female Barack Obama”, though she did not like it. They had similarities; both were in the legal field before entering politics and both had mixed-race backgrounds. Her Jamaican and Indian origin stories featured extensively in her election campaign. “Pronounce my name ‘comma-la’,” she would tell crowds. “This means lotus, which has great significance in Indian culture. A lotus grows underwater, its flowers rising above the surface, while its roots are planted firmly in the river bottom.”

Kamala was born in Oakland in 1964 to Stanford economics professor Donald Harris from Jamaica and breast cancer researcher Shyamala Gopalan from Tamil Nadu. Shyamala graduated from Delhi University and reached Berkeley in 1958 for doctorate in nutrition and endocrinology. The couple divorced soon after Maya was born. Kamala graduated from Howard College and Hastings Law College, and in 2014 married the Jewish lawyer Douglas Emhoff. Maya and her husband, Tony West, and their daughter, the children’s writer Meena Harris, are also lawyers.

Kamala’s father has figured rarely in her speeches. It was always the mother that stood out. Donald Harris blames this loss of relationship with his daughters on a long-drawn custody battle in the aftermath of the divorce, which he lost. Even in her autobiography The Truths We Hold, Jamaica figures just once. 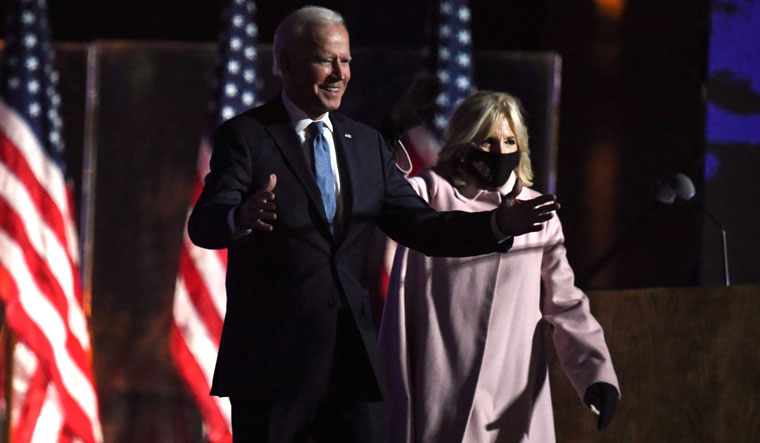 Kamala loved her visits to India—her extended family lived in Chennai’s Besant Nagar, and they would go on walks on the beach. Her grandfather Gopalan was a diplomat and freedom fighter; grandmother Rajam was a community organiser who took in and protected wronged wives and educated women about contraceptives. In her book, Kamala fondly remembers her mother’s brother Balu and two sisters, Sarala and Chinni.

Kamala, in the book, talks about her mother’s experimentation with okra, turmeric and mustard. In a viral video, she is seen making dosa with Mindy Kaling, an American TV actor of south Indian origin, and telling her that she was raised on “rice and yogurt, potato curry, dal and idlis”.

After she announced her decision to run for president, questions were raised over her heritage on both sides, much like what Obama had experienced when he ran for president. “How can she call herself an African-American when her heritage comes from the Caribbean?” asked her detractors. After The New Yorker magazine reported that her father had mentioned that his paternal grandmother was a descendant of a slave owner, some of Kamala’s critics said she had no right to speak for Americans who descended from slaves. Kamala responded: “Look, this is the same thing they did to Barack [Obama]. I was born black. I will die black.”

Her prosecutorial record, too, was dissected. Critics said it “affected low-income African-American families the worst”—a point which Congresswoman Tulsi Gabbard used to kneecap her in the primaries. Kamala had instituted strict marijuana imprisonment laws and anti-truancy laws that jailed parents if their children did not attend school. She pointed out how she had put body cameras on cops, and ensured education and work programmes to replace convictions in nonviolent first felonies.

On the other side, conservative Hindu groups questioned her “Indianness”, which they alleged she had never claimed before the elections. Conservative activist Radhika Sud from Atlanta said: “Harris is a supporter of the anti-India, anti-Hindu brigade, who calls herself black, hates Indian side of her family, never recognised herself as an Indian”. Radha Dixit, founding member of Indo-American Conservatives of Texas, said, “Nowhere did Kamala try to claim her Hindu or Indian heritage but people are thrusting their values on her.” The Trump campaign piled on. Donald Trump’s son Eric said Kamala had “totally run away” from the Indian-American community.

Kamala was unperturbed. In her rallies, she spoke about her mother, and her experiences worshipping in both temples and churches: “She raised us to be proud, strong, black women. And she raised us to know and be proud of our Indian heritage.”

Return to the Delaware school. “Thirty years ago, I stood before a judge for the first time, breathed deep and uttered the phrase that would truly guide my career and the rest of my career—Kamala Harris for the people,” she said. “The people, that is who I represented as district attorney, fighting on behalf of victims who needed help. The people, that’s who I fought for as California’s attorney general when I took on transnational criminal organisations who traffic in guns and drugs and human beings. The people are who Joe and I will fight for every day in the White House.”

At 55, Kamala is young enough and strong enough to run again.