Political heft of the Indian American community is growing 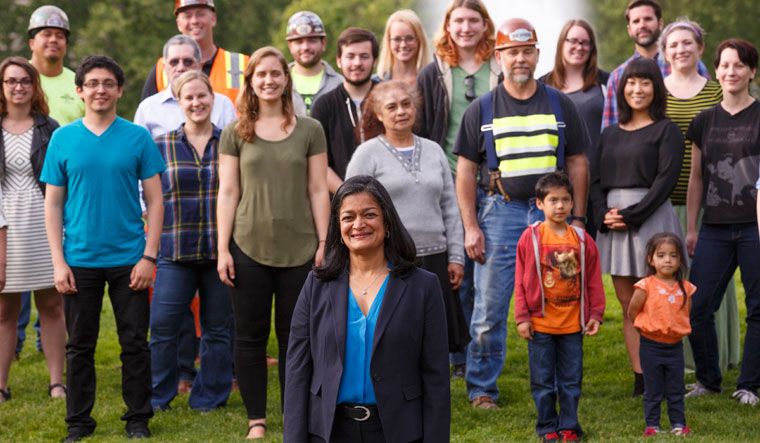 Don’t ever tell Pramila Jayapal that something cannot be done; she will get it done. Jayapal, the Democrat who represents Washington state’s seventh congressional district in the house of representatives, is “one of President Donald Trump’s most fearless opponents” and a “fast-rising Democratic star”. She won a third house term on November 3, defeating her Republican rival winning more than 80 per cent of the total polled votes.

Jayapal, 55, is the first Indian American woman to be elected to the house of representatives. She came to America as a 16-year-old student from Chennai to attend Georgetown University. Her family used all its savings to send her and her sister for education abroad.

While doing her MBA at Northwestern University in Evanston, Illinois, Jayapal helped develop a course around economic development and tutored on the southside of Chicago at Cabrini-Green, one of the most notorious public housing projects in the metropolis.

After college, she became a financial analyst on Wall Street, where she tried organising analysts for social good. During graduate school summer, she interned in Thailand with a rural NGO while her friends worked in consulting firms and investment banks. She left the private sector in 1991 and joined PATH, a nonprofit health organisation, and worked in villages in India for two years.

Back in the US, the fallout of the 9/11 terrorist attacks gave her a firsthand experience about the problems faced by immigrants. “We were told to go back to our own countries, although we called America home, had planted roots, grown dreams, built families and communities.”

Jayapal chose to fight back and asked the government not to racially profile immigrants. Five days after the attacks, she got a call from one of her friends, a schoolteacher, after a third Muslim family had withdrawn their children from school for fear of being attacked. In response, she launched Hate Free Zone, now known as One America, to fight hate crimes against Arab, Muslim and Sikh communities.

The group challenged the government on issues such as abuse of civil liberties and discrimination, and pushed for comprehensive immigration reform. Jayapal since then has been working to bring undocumented immigrants out of the shadows, keep families together and offer immigrants pathways to secure visas and citizenship.

In 2012, Jayapal became the first south Asian American and the only woman of colour to be elected to the Washington state legislature. Four years later, she was elected to the house of representatives, and served as co-chair of the congressional progressive caucus.

Jayapal does not accept corporate political action committee (PAC) contributions and is a supporter of the public financing system of elections. She recognises climate change and health care as America’s major challenges. “I support an urgent approach to address climate change that centres on poor communities and communities of colour,” she said. She wants to transform the health care system by making it a right and not just a privilege for the wealthiest.

Jayapal lives in Seattle with her husband, Steve Williamson, and their two sons, Janak and Michael. Her stories and beliefs are explained in her inspiring memoir Use the Power You have: A Brown Woman’s Guide to Politics and Political Change. She wants the Indian American community to be more active in politics by running for office whenever possible, by financially supporting Indian American candidates and by recognising the importance of engaging with the government. “After I was elected to the house of representatives, many Indian Americans, especially women, contacted me with the great hope that new pathways have been opened for them,” she said. “Indian American girls can see that they, too, can take impossible journeys and succeed in becoming one of the only 11,000 people that have ever had the honour of serving in the US congress.” 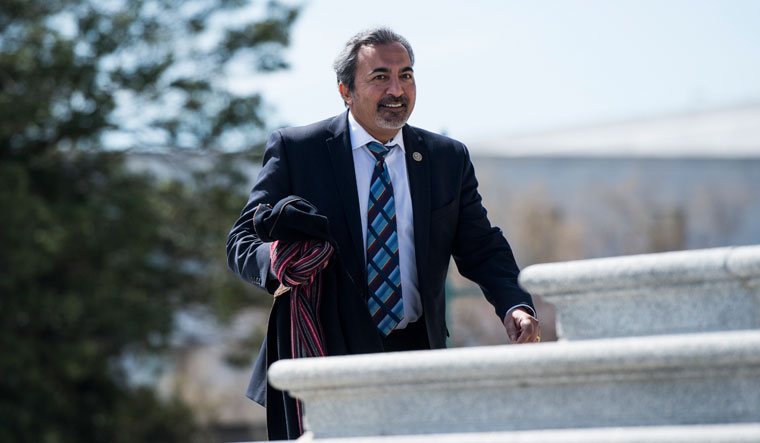 In 2013, when Ami Bera was elected to the house of representatives from California’s seventh district, he accused career politicians of lining their pockets with special interest money. “We are now left to pay the price for their government malpractice,” he said. “This is why I am taking a new oath, like the one I took to become a doctor, to put people first.”

Bera, the longest-serving Indian American in the congress, said he would not take a congressional pension until medicare and social security were secured for all Americans. He also proposed a law which would deny legislators their salaries if they failed to pass a responsible budget. On November 3, Bera won in a landslide, securing 61 per cent of the total votes polled.

“When I first thought about running in 2010, a lot of folks just shook their heads and asked, ‘How are you going to get elected?’” said Bera in a recent virtual chat with his fellow Indian American congress members. “I just went out there and ran on the immigrant story, which is an American story and really does resonate.”

Bera comes from a farming family in Rajkot, Gujarat. His father came to the US for a master’s degree in engineering. His mother was a teacher. After finishing medical school, Bera served as chief medical officer of Sacramento county and as dean of admissions at the University of California, Davis.

Bera lives in Elk Grove, California, with his wife, Janine, who is also a doctor, and their daughter Sydra. He said he had been fortunate in what America had given him and his family. He feels involvement in political life is the natural progression for the Indian American community, which now wants to give back to the country and have a seat at the table. He said the Indian heritage was an asset for him. “I never run away from who I am. I actually run towards the values my family instilled in me.” 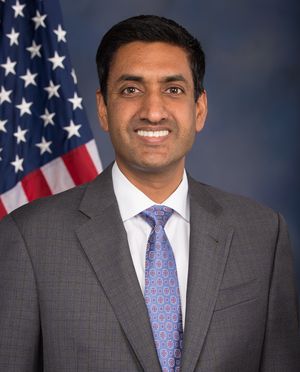 For the ordinary American

.The spirit of the Indian independence movement is a fountainhead of inspiration for Congressman Ro Khanna, who represents California’s 17th district, located right in the middle of the Silicon Valley. His grandfather was a freedom fighter and a close associate of Lala Lajpat Rai.

Khanna, 44, was born in a middle-class family in Philadelphia. His father was a chemical engineer and his mother a substitute teacher. After completing an undergraduate degree in economics from the University of Chicago and a law degree from Yale University, Khanna taught at Stanford University, Santa Clara University and San Francisco State University. He served as deputy assistant secretary at the department of commerce during the Barack Obama administration. In 2012, California governor Jerry Brown appointed him to the state’s workforce investment board.

Campaign finance reform is one of Khanna’s key priorities and he is one of just six elected officials in the US to refuse campaign money from PACs and lobbyists. He wants congress members to have a 12-year term limit and supports a constitutional amendment to overturn the supreme court verdict in the Citizens United case, which permitted corporations and other outside groups to spend unlimited funds on elections.

As a member of the house budget committee, armed services committee and committee on oversight and reform, Khanna is also the first vice chair of the congressional progressive caucus. He serves as an assistant whip of the Democratic caucus.

Khanna, who won on November 3 with 74 per cent of the total polled votes, is well aware of the political importance of Indian Americans. “Many of us were not part of the mainstream and it gave us empathy for people who were excluded,” he said. “The greatest service that the south Asian community can do is to draw on traditions that are so great, a civilization that is so great, and to stand up for those principles in the 21st century.” 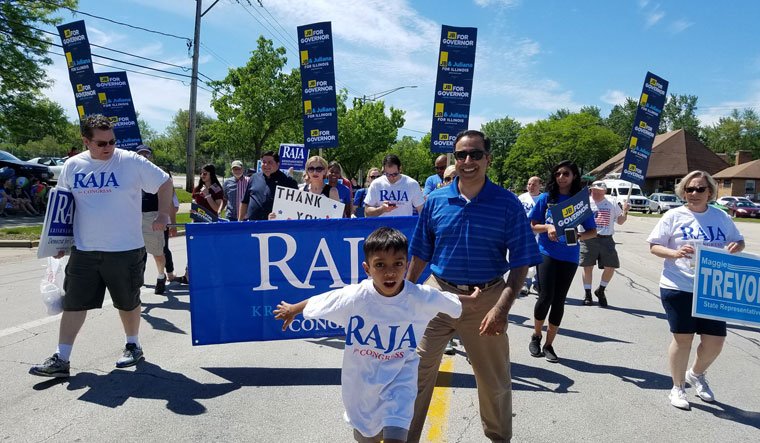 The name Subramanian Raja Krishnamoorthi is a mouthful in America, but the congressman from the eighth district of Illinois has carried it with aplomb and made a mark with several thoughtful legislation for American people. He easily won a third term on November 3, defeating Preston Nelson of the Libertarian party.

Born to Tamil immigrants from New Delhi, Krishnamoorthi grew up in Peoria, Illinois. For a while, his family lived in public housing and required food assistance before his father became a professor and they acquired a middle-class lifestyle.

Krishnamoorthi remembered those tough days when President Donald Trump decided to eliminate the food assistance programme. “Food stamps helped my parents work their way out of a difficult time. Today my father is an engineering professor, my brother is a doctor and I am a congressman. That was our American dream,” he said on television.

Krishnamoorthi graduated from Princeton University with a degree in mechanical engineering and got his law degree from Harvard Law School. He served as a special assistant attorney general in Illinois, was the state’s deputy treasurer and was also a member of the Illinois housing development authority. He later worked in the private sector, heading research-oriented small businesses in the national security and renewable energy industries.

Krishnamoorthi, 47, is married to Priya, a physician, and they live in Schaumburg, a Chicago suburb, with their two sons and a daughter.

He was first elected to the congress in 2016. He serves on the house oversight committee and the steering and policy committee. Acknowledging the many important issues the Indian American caucus deals with, he said the one issue which was of great importance for him as an immigrant was comprehensive immigration reform, including improving the H-1B visa programme.

Krishnamoorthi was a co-sponsor of the Fairness for High-skilled Immigrants Act, aimed at removing the current country quotas for green cards. “When I first ran for office here in Illinois, I said to someone ‘My name is Raja Krishnamoorthi.’ And the person in Chicago looked right back at me and said, ‘Roger Christian Murphy’. It is so nice to be among folks who share a common origin story as myself! I came here when I was three months old... I am now in the United States Congress,” he said.

He is keen on making Indian Americans stand up for themselves. He said: “There is an old saying in Washington, DC, which is, if you do not have a seat at the table, you are on the menu! And none of us, our families, our communities, and certainly not our priorities, can be on the menu. We cannot afford that any longer.”