For the country, against the crown 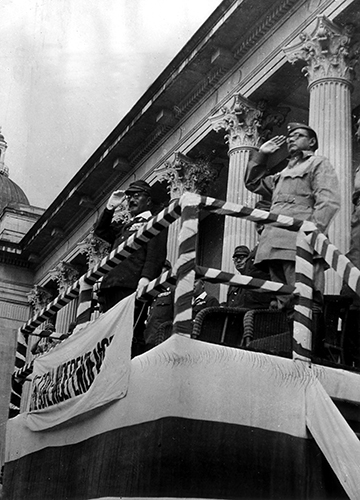 Against a common foe: Subhas Chandra Bose with Japanese prime minister Hideki Tojo at a parade for Indian national independence at Shonan, Japan, in 1944 | Getty Images

IT WAS NOT just for the king and the crown that Indians fought. Many fought under an 'Indian' flag of Subhas Chandra Bose, and a few under the Axis flags of Italy and Germany.

The Italians, who were initially successful in north Africa, had raised a unit composed of Indian prisoners of war. But when ordered to Libya in 1942, the Indians refused to fight their compatriots on the British side.

In Germany, where he fled first from house arrest in Calcutta, Subhas Bose raised a legion of about 2,000 Indian soldiers whom the Germans had captured in north Africa. But as Bose failed to raise them into a composite unit, German general Erwin Rommel refused to induct them in north Africa in late 1942. They were then sent to Holland where they mutinied, and later to France. By then, Bose was fed up with the Nazis and made his submarine trip to Japan.

In Singapore, meanwhile, Captain Mohan Singh, who had been captured by the Japanese, had raised the first Indian National Army consisting of Indian prisoners of war. Soon, Mohan Singh became suspicious of the Japanese intentions. The atrocities they committed on the locals in Malaya, and also on the Indian prisoners who refused to switch allegiance, shocked his gentleman-officer conscience. He declared that only Bose could lead the INA and stand up to the Japanese on equal terms. By the time Bose arrived, Singh had relinquished command. In October 1943, Bose formed the Provisional Government of Free India, with his newly raised INA as its army.

Bose's cries of "Chalo Dilli", "Jai Hind" and "Give me blood, and I will give you freedom" had inspired not only thousands of captured soldiers, but also many more Indian civilians living in Singapore, Malaya and Burma to rise against the British. The cowardly evacuation of Malayan towns by British troops and families when the enemy came knocking had made Indians there feel let down.

Bose had plans to raise an army of 2,50,000 Indian civilians and prisoners of war. The Japanese political leadership was accommodative of his plans and had signed a treaty that they would treat the INA as an allied army as distinct from a fifth column. But Japanese field commanders were suspicious of the prisoner-turned soldiers. They thought that the prisoners had joined the INA only to escape torture in PoW camps. Field Marshal Count Hisaichi Terauchi, the Japanese commander in Burma, was reluctant to employ the INA, and when he finally did, he allowed only 12,000 of them. He feared that the INA troops would switch back to the British side at the opportune moment.

The British too had similar worries. They feared Bose's popularity among the troops and thought that many might defect. So, either side unleashed propaganda wars maligning the other (see story on page 60).

The high point of the INA's campaign was when Bose planted the flag of his provisional government on the Andaman Islands. His plan, in the event of a Japanese defeat, was to make the INA infiltrate into India and wage a guerrilla war against the British in India.

But the rout of the Japanese from Imphal and Kohima, and General William Slim's decision to pursue them, put paid to the plans. The expected desertions from the British Indian side also failed to materialise at Imphal and Kohima. Bose walked with his troops while retreating from Rangoon to Thailand, refusing a commander's vehicle. When the war ended in 1945, and Bose died in an air crash while trying to escape to Russia, the INA had about 40,000 soldiers.

More than during the war, it was after the war that the INA became a threat to the British. Even Bose's critics were outraged when the British proceeded to try them for treason. Jawaharlal Nehru, who was also a critic, donned his barrister's gown and joined Bhulabhai Desai to defend the prisoners' case in the Red Fort trials. Sensing the mood in the country, the commander-in-chief Claude Auchinleck granted them pardon, though they were not taken back into the Army.