75 years since WWII end, how Japan's past is still haunting ties with Korea, Pacific

Over World War 2 reparations, ties between South Korea, Japan are lowest in decades 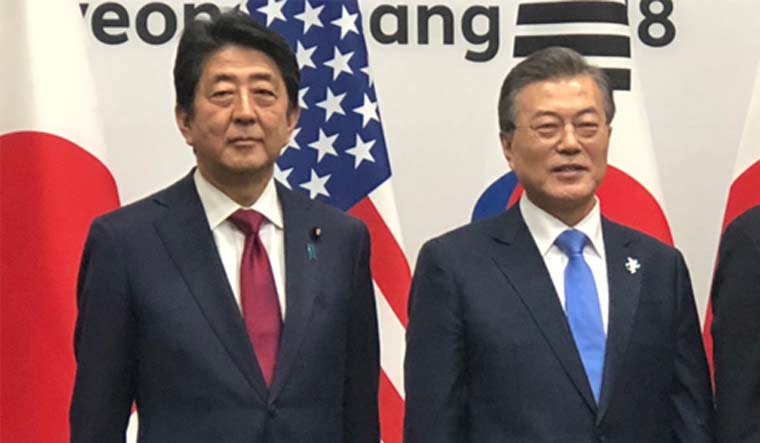 On the 75th anniversary of the end of World War 2, on Saturday, Japanese Emperor Naruhito expressed deep remorse over his country's wartime brutality. Naruhito pledged to reflect on the war's events and expressed hope that the tragedy would never be repeated. "Reflecting on our past and bearing in mind the feelings of deep remorse, I earnestly hope that the ravages of war will never be repeated," Naruhito said.

However, Prime Minister Shinzo Abe remained tight-lipped on that part of Japan's bloody history, preferring to give a speech focussing on the damage inflicted on Japan and its people, including the US atomic bombings of Hiroshima and Nagasaki, massive firebombings of Tokyo, and the fierce battle of Okinawa.

The destructive Pacific War during the World War 2 still haunts ties in the region. Last year, the relations between Japan, South Korea had sunk to their lowest point in decades, as they allowed their disagreements over wartime history to spill over into issues related to trade and military cooperation. There is a long legal and diplomatic dispute between the two countries over compensation for Koreans who had been subjected by the Japanese to forced labor at mines, factories and other sites. Some of Japan's biggest, wealthiest companies originated in industrial groups called zaibatsu, that relied on forced labour, especially during wartime, when labour was scarce because so many adult men were away fighting. The Mitsubishi, Mitsui and Sumitomo conglomerates have denounced continuing demands for reparations.

On Saturday, South Korean President Moon Jae-in offered talks with Japan to resolve a bitter feud over wartime grievances. In a nationally televised speech, Moon said his government has left the door of consultations wide open for Japan to settle the diplomatic differences.

Imperial Japan, during the Second World War, had joined hands with Nazi Germany and launched full-scale assaults on its neighbours including South Korea and China. During Japan's 1910-1945 colonial rule of the Korean Peninsula, Koreans had to adopt Japanese names, worship Japan's Shinto religion and speak Japanese. They were treated as second-class citizens. Hundreds of thousands of men were drafted to fight for Japan, and many others were used as labourers at Japanese mines and factories under harsh conditions. Korean women and girls were among tens of thousands of Asian comfort women sexually abused by Japanese soldiers.

Tokyo claims all compensation issues were settled when Japan and South Korea normalised relations in 1965. However, recent rulings by South Korean courts ordering compensation from Japanese companies that employed forced labourers have sent ties between the countries to post-war lows.

The rape of Nanking is still an issue that greatly clouds Chinese-Japanese relations. China and an international postwar tribunal said at least 2,00,000 civilians were killed by Japanese troops in a weekslong frenzy of murder, rape and arson after Nanking, then China's capital, fell to Japan on December 13, 1937. The event remains one of the biggest flashpoints between the two countries. Right-wing Japanese politicians downplay the death toll or deny that the atrocity happened. Last year, PM Abe's cabinet said some killing and looting could not be denied, but declined to estimate the toll, citing differing views.

The dark chapter in Japan's history peaked with hundreds of thousands of people brought from the Korean Peninsula and other Asian nations to work in logging, in mines, on farms and in factories as forced labour. Multiple historians have claimed that Japan has never seriously faced up to the realities of the devastating abuse that Japan brought to neighboring nations and their people.

Abe has insisted that all wartime compensation issues were settled when the two countries normalised relations under a 1965 treaty. However, Japan's stance was refuted by South Korea's Supreme Court in 2018, when it ruled that the deal did not cover individual rights to seek reparations and called on Japanese companies to compensate aging Korean plaintiffs who had been forced into slave labor.

"Our government is ready to sit face-to-face with the Japanese government at any time to find a mutual solution the victims can support," Moon said. He said the process would help build a bridge of friendship and future cooperation between the countries. Tokyo didn't immediately respond to Moon's comments.