The city of perils

Hit by Covid-19 and an early monsoon, Mumbai has never seemed so close to the brink 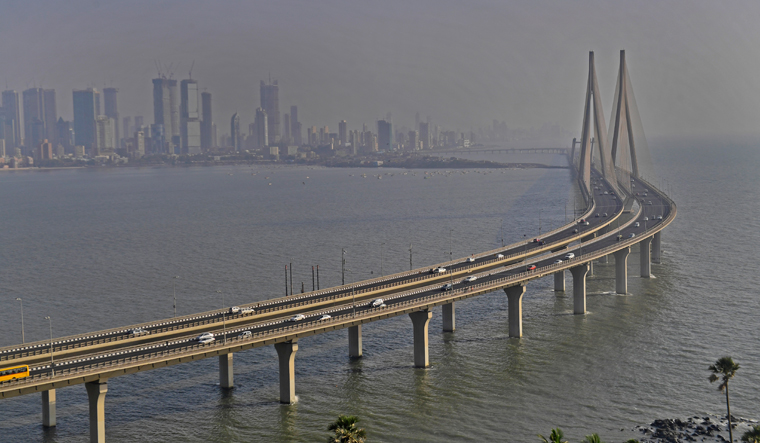 My aunt, Celine Coelho, is a retired teacher. She lives on her own in a studio apartment with a patch of carefully tended garden. Over the last six weeks, she has been looking after herself, washing her clothes and ironing them, cooking her meals and eating them alone. She has no smartphone, no computer, no laptop, no Netflix. She has books and her writing. She is 84 and for me, she is a hero of the lockdown. But even heroes have lessons to learn. “I have always valued my independence,” she said to me over the phone. “What the lockdown has taught me is how dependent I am on other people.”

It is a lesson every Mumbaikar is learning quickly. This is being written as Cyclone Nisarga begins to sweep inland and netizens are reading Amitav Ghosh’s warning message about stocking up on candles and drinking water. It is being written just after we were told that the locusts were coming. The locusts are now in Maharashtra and eating up the crops. We have never seemed so close to the brink.

One of the phrases I use to describe my city is “an emergency in slow motion”; another way is “anarchy with a veneer of functionality”, and over the last couple of months, this has been demonstrated again and again. We thought we would not get our fresh veggies in Mahim where I live when the Gopi Tank Market—famed across the city for its produce and its fish—closed down when a Covid-19 case was confirmed. A market sprang up on the street; it began at 7am and was done two hours later when the first police vehicles and municipality vans began to scour the streets. Security staff turned into entrepreneurs. A Gorkha family went from standing ornamentally in front of shopfronts to selling onions, potatoes, tomatoes and the occasional bunch of coriander. Meanwhile, the news went from worries about citizenship to being intensely local. Everyone wanted to know where “cases” had been located. Friends inaugurated calls with: I hope you are okay? And then went on to: And your building?

But no one was sure about what happened next. In a building nearby, a doctor tested positive. The hazmat suits appeared and took down the names and numbers of everyone in the building, and then some municipal workers came and cleaned the staircases, and that was it. Life went on as usual. The building was not locked down leaving the residents feeling slightly let down and deeply relieved. Since there was never any clear information about what to expect, and newspapers were not being delivered, everyone became an expert. Everyone could tell you what the chief minister was going to do until he went and did something else. 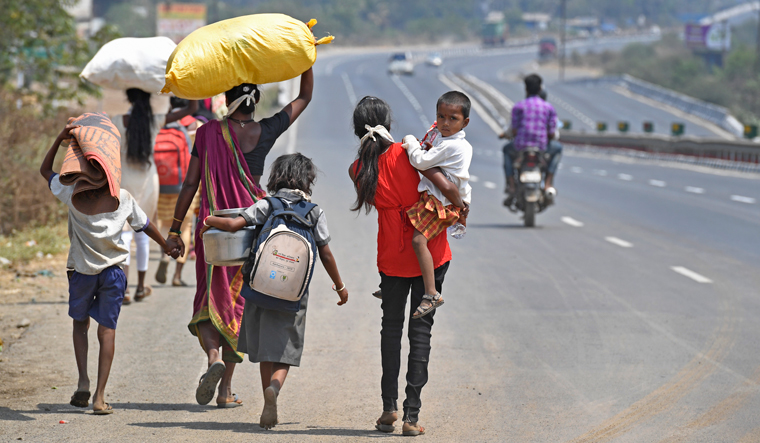 Long road ahead: Migrant labourers on the Mumbai-Ahmedabad highway, en route to their homes in Dahanu, in Palghar district of Maharashtra | Amey Mansabdar

Otherwise, the city functions as it always did. The rich have left. They have incarcerated themselves in their farmhouses and post pictures of themselves doing chores. The rest of us are supposed to respond to this virtue signalling by being charmed at the sight of beautiful people doing the sweeping and swabbing. This, as we get on with the sweeping and swabbing, which we never did either.

As for the poor, they have been the target of our twin sins—a besetting apathy and a lack of empathy. While we tell each other that there is no shame in not learning something new, the poor have learned how to live on one meal, if they are lucky, handed out by a passing NGO. While we show off the ham and cheese croquettes we baked, and our friends post drooling emojis, migrant workers leave the city, walking, cycling or on trains that lose their way. (A train loses its way? How does that happen? On second thoughts, do not tell me. I do not want to know.) While we put together Twitter storms to get our children back from the United States, where they have been studying, migrant workers die of starvation.

What keeps us going is schadenfreude, a German word that means the joy we feel in the pain of others. I hear of a colleague whose father suffered a stroke on the second day of lockdown. She got him to hospital, she got him home, she got him a bed and carers, she also got Covid. Then began a saga of fever and pills, and the discovery that living in a single room on your own is solitary confinement, and can break the bravest soul. But if she steps out of that room, and passes on the infection, her father, who is in his late eighties, will be put at risk.

At the beginning of the lockdown, we assured each other that the summer would burn the virus to death and we would get on with our lives. That does not seem to have happened.

Last night, I woke up to a familiar sound—the thunder of rain on the weatherboarding. This has always been a special moment. Practically the only poem I responded to viscerally in the daffodil-strewn English language curriculum was How Beautiful is the Rain (Rain in Summer) by Henry Longfellow. “Like a river down the gutter roars, the rain, the welcome rain,” he wrote.

I got up and walked into a night newly cooled. I let myself breathe deep of petrichor—the smell of earth wetted by rain. I let myself be transported back to a childhood of bouncing into puddles with my Duckback raincoat heavy on my back. I allow myself this moment every monsoon before I remember that these three months will be very trying on the marginalised of the city—the homeless and the poor. This year, with Covid-19 out there, it will be much, much worse.

Will the city survive this? “Oh, the city has had its obits written again and again,” says Naresh Fernandes, editor of Scroll.in and author of City Adrift: A Short Biography of Bombay. “In our lifetimes, the city was pronounced dead after the riots of 1992, the bomb blasts, the great deluge, the terrorist attack on the Taj….”

The question is not of survival, I believe. The question is of learning. Can we learn to connect? Can we learn to reach out? Can we demand decent living conditions for the least of our citizens, without asking what religion they follow or what caste they belong to? Can we hold the nation’s richest municipal corporation accountable? Or, will we go back to the joys of social media posturing?