The lockdown in Mumbai has been extended. But the cameras could roll again. Lights could be set up. Perhaps, sets could be erected, too. But all this with limitations. On May 31, the state government announced the launch of Mission Begin Again from June 3. In a three-phase removal of restrictions and introduction of relaxations to the lockdown, some relief has been given to the entertainment industry in Mumbai as well, with shootings allowed in non-containment zones—but with strict security protocols.

The security protocols include social distancing of around two metres between crew members and the use of face masks and disinfectants. There are strict guidelines limiting the number of people allowed, at a time, on the set. No shoots will be allowed in unclean or crowded places—which means no sequence that involves too many background artistes. There will be restrictions on shooting with actors above the age of 60.

Last year, Bollywood made nine per cent revenue growth, churning out around $24 billion. According to a FICCI-EY report before lockdown, it was expected to rise to as much as $34 billion by 2022. But it is estimated that the entertainment industry has already incurred losses of over Rs1,000 crore since mid-March.

Amid losses, there are producers who are trying to look at the positive aspects. “I am thinking of what I have gained, which is the safety and well-being of the people who work with us,” says Bhushan Kumar, chairman and managing director, T-Series. “I have come to terms with the fact that 2020, in terms of earnings, is going to be [less rewarding] compared with 2019. But we cannot do anything about it.”

T-Series had a line-up of 12 films in 2020, including Mumbai Saga, and Ajay Devgn and Sanjay Dutt starring Bhuj: The Pride of India. Kumar says that a few days of shoot were left for many of these films, and he is weighing the options on how that could be done. “It will take time for the bigger films, but for smaller patchworks, maybe we can restart [the work].”

Even as the industry grapples with many issues, there has been a growing demand for content. As filmmaker Anurag Kashyap puts it: “In such times people depend a lot on art, music, cinema and shows. It keeps us sane.”

And, it is a big challenge, “to meet the demands when there are valid challenges on the supply front,” says Ajit Andhare, COO, Viacom 18 Studios. “The nature of our work is such that some of the assets are just not replaceable. How do you replace certain key assets like technicians, performers and actors?” 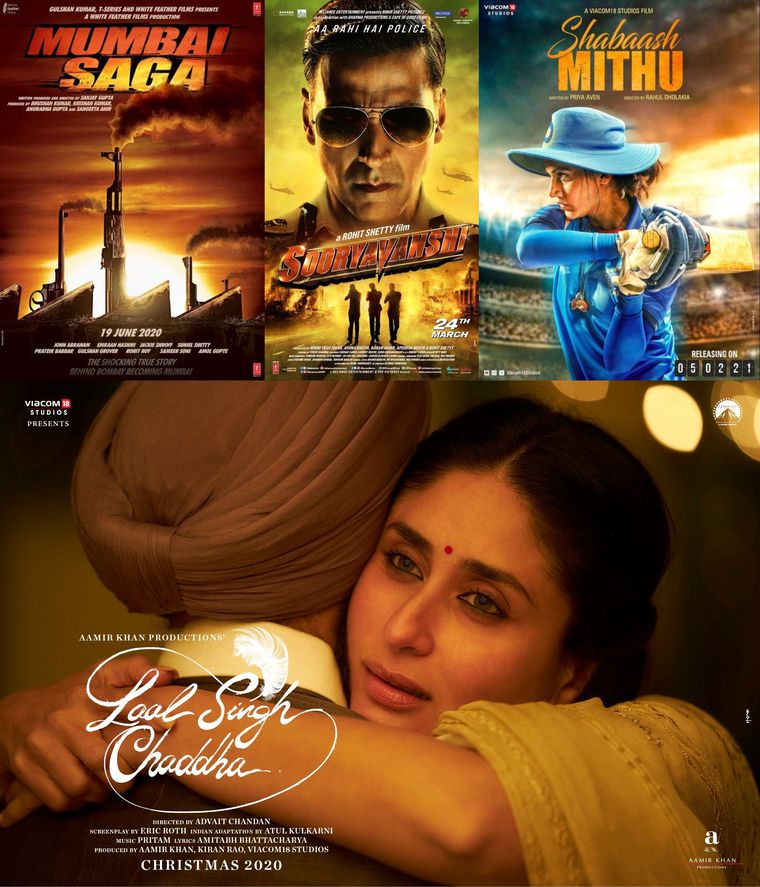 All lined up: Posters of films that are in various stages of production

Andhare’s pending projects include Laal Singh Chaddha with Aamir Khan (on the last leg of production), cricketer Mithali Raj’s biopic with Taapsee Pannu (in the pre-production stage) and a web series, X-Ray, that was scheduled to go on floors on March 28. “We had to wind up the shoot when the lockdown was imposed,” he says. “We are now evaluating how we can resume shooting.”

Andhare is certain that the budget delegated to projects will be slashed considerably. “There will be considerable decrease in the carrying cost,” he says. “There is an issue of additional cost which are coming in because of the safety measures. The unit economics is also going to change considerably.”

Andhare points out that right now the shoot will be allowed only in a restricted number of places. “[For a project to be completed as per plan], you want the freedom to shoot at any location that you want,” he says “Other options are being explored. For instance, Kolhapur city has emerged as an interesting proposition. Another could be Ramoji Film City, Hyderabad. We have been evaluating [shooting locations in] Karnataka and Kerala as well. The impending monsoon is another big challenge.”

And, even if the projects are somehow completed, one does not know when the theatres are going to be fully functional. “Right now, the proposal is that it will open in July, but with what kind of norms? If it opens with a 33 per cent capacity, the films may not work. I will not release my films because there is no assurance that those 33 per cent seats will be occupied,” says Kumar, who has been contemplating the option of releasing some of his films on digital platforms.

Content creators taking the digital route, and pushing their films on streaming platforms has got a mixed response with theatre chain owners feeling threatened. But Kashyap thinks that the only way forward is to “constantly adapt and go on”. “Nobody has a solution [and thus] we have to adapt,” he says. “The most important thing is seeing what is happening around us and going along with the times, surviving with our art. Some people can hold their film back, and, yet, be a support system for people around them. But not everyone can.”

He adds that it is important to take care of the many daily-wage workers—spot-boys, light-men and technicians—associated with film shooting.

“The producers have sunk money; there is cost on capital, salaries that need to be taken care of,” says Shibasish Sarkar, group CEO, content, digital and gaming, Reliance Entertainment. “Everyone is hit by the pandemic, the exhibitors included. But if the producers have taken a call to go straight-to-digital, probably that was required for them to do so.”

Reliance Entertainment has four films in Hindi—including the much-anticipated Sooryavanshi and ‘83—and three films in Tamil, waiting for release. The shoot for all of these films, except one, is complete. “Reliance has individually spoken to all the filmmakers about what they want,” says Sarkar. “Our internal take is also that we have made spectacles like ‘83 and Sooryavanshi for the large-screen experience. We will try to hold these films till it is possible for us, but it is a fact that you have to consider an organisation’s ability in these times.”