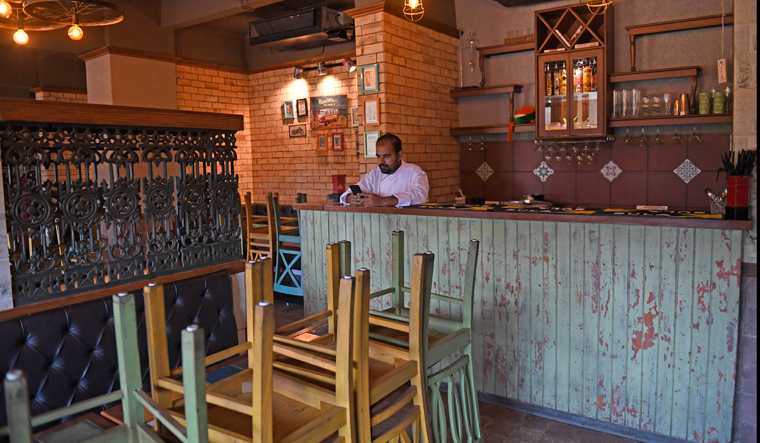 Covid-19 has done to Mumbai what the 2005 floods, the 26/11 attacks and the global economic crisis in 2008 could not—force the city to a grinding halt. In the past two months, only essential services like hospitals, banks, pharmacies and grocery shops have been open in Mumbai. Restaurants, cafes, shopping malls, multiplexes, clubs, gymnasiums and other places that enlivened Maximum City remain closed.

Brokerages and credit-rating agencies expect India’s GDP to contract as much as 5 per cent this year. As India’s financial capital, Mumbai accounts for nearly 7 per cent of the national GDP. Investment bank Barclays said in April that Mumbai and Delhi were likely to see economic losses of $1.5 billion or more every week because of the lockdown.

“It is painful to describe the sudden stoppage of the wheels of business in the city that never sleeps,” said Niranjan Hiranandani, managing director of the Hiranandani Group. “The new set of restrictions that came into effect on June 1 focuses on the revival of the economy. But, with Mumbai and the Mumbai Metropolitan Region remaining in the red zone, it means no major restart of economic activity yet.”

The gross state domestic product (GSDP) of Maharashtra, India’s most industrialised state, is nearly Rs29 lakh crore. The Mumbai and Pune regions account for almost 65 per cent of the GSDP; so the situation in Mumbai will have a wider impact.

The service sector—hotels, banks, media, education and entertainment—drives nearly three-fourth’s of Mumbai’s economy. Almost half of India’s top 50 companies are headquartered in Mumbai. In most sectors, companies have allowed employees to work from home. Banks and stockbroking houses have ensured that services remain unaffected, even as they operate with skeletal staff.

The retail sector, however, has taken a big hit. Mumbai sees sales of non-essential goods worth nearly Rs400 crore every day. Essential goods account for another Rs500 crore daily. “If you look at non-essential retail, there were zero sales in April and May,” Kumar Rajagopalan, CEO of Retailers Association of India, told THE WEEK. “In June, too, we may end up with just 30 per cent of [normal] sales. Even sales of essential items were down around 40 per cent in the last two months.”

Real estate has also been hit hard. Mumbai’s housing sector, especially the premium and luxury segments, had been battling low demand even before the outbreak. According to the research firm Anarock, 15.62 lakh housing units launched from 2013 to 2019 were in various stages of completion in the top seven cities in India, before construction was delayed because of the lockdown. The Mumbai Metropolitan Region alone accounts for 30 per cent of it. Launches are expected to decline this year, as sales are likely to take a hit because of the lockdown.

According to ratings agency CRISIL, Mumbai and Delhi account for almost half of the Rs1.5 lakh crore organised restaurant market in India. Before the lockdown, dine-ins accounted for 75 per cent of the business. With only takeaways and deliveries allowed now, analysts say layoffs and closures look inevitable.

Shopping malls also remain closed. Experts say at least 25 per cent of outlets may have to shut shop for good, as many of them will not be able to afford rent. With footfalls expected to fall dramatically, others may find it difficult to break even.

“In many cases, retailers have no money to operate,” said Rajagopalan. “Most of the retailers do not even have working-capital finance from banks. While they continue to incur expenses, there is no money available. In the next one month, around 25 per cent of them will shut shop.”

Mumbai had recorded an employment growth of 2.9 per cent from 2014 to 2016. According to a Brookings study, it had added more jobs than Los Angeles, Istanbul and Dubai during this period. The lockdown, however, has resulted in 1.1 million migrants leaving Mumbai. Their absence will have a huge impact when businesses reopen.

“We have lost trained labour,” said Hiranandani. “So there would be an impact as regards the pace of completion [in construction], which will be slower because of shortage of workers. In other segments, where trained persons have left, there would be a need to retrain others.”

The Indian Hotel and Restaurant Association said 70 per cent of restaurant workers have left for their home states. The retail industry, said Rajagopalan, will have at least 25 per cent fewer workers available.

The recovery is likely to be slow. “We will begin to move towards normalcy in the second quarter,” said V.S. Parthasarathy, president of the Bombay Chamber of Commerce and Industry. “Some sectors will achieve normalcy in the third quarter, while others might take longer. Currently, there are issues with cash flow, labour and supply chains.”

Even though the Union government and the Reserve Bank of India are trying to ensure ample liquidity in the system, risk-averse banks have been cautious in lending. But liquidity itself would not determine the pace of recovery, said Parthasarathy. Making liquidity available will also be key.