How the Covid-19 pandemic brought Mumbai to its knees 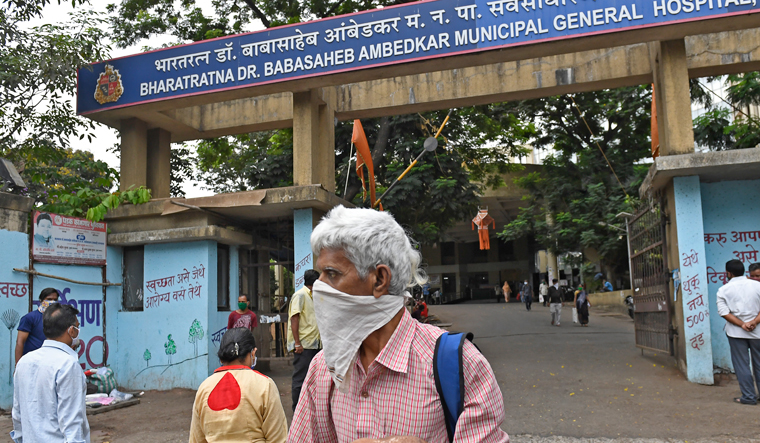 Inspector Amol Kulkarni, 33, collapsed in the bathroom of his house in Sion on May 16. He was immediately taken to hospital, but was declared dead on arrival. He had got himself tested for Covid-19 three days earlier, when he went to a hospital with cold and fever. His test results, which were positive, came a few hours before his death. Kulkarni’s last rites were done by the officers and constabulary at Shahu Nagar police station, as his family was quarantined. “You are our family,” Kulkarni’s wife told his colleagues. “Please perform Amol’s last rites.”

Another death that hit the headlines was that of Dr Chittaranjan Bhave, an acclaimed ENT surgeon. He died on June 2 of complications that followed Covid-19 infection. Doctors and nurses are getting infected in droves, and at least two policemen succumb to the disease every week.

The city of Mumbai is reeling under its biggest health care crisis since the plague of 1896. Reports say on average 30 people died of Covid-19 every day in the city in May. The lockdown might have helped in limiting the numbers, but the disease’s unrelenting spread has scared the people like never before. Reports of frontline health care workers being stopped by housing societies from returning to their homes are a manifestation of how deep the fear has set in.

The total number of Covid positive cases in Mumbai crossed 42,000 on June 3, which is about one-fifth of the total reported cases in the country. The emergency ward of the Lokmanya Tilak Municipal General Hospital in Sion is a heart-wrenching picture. Two patients share each of the 15 beds and the attached oxygen tanks in the ward. A staff of four—nurses and residents—jostle for space with relatives of patients. Buckets of used masks and gloves are kept alongside trolleys of fresh medical equipment. People walk in and out as they wish, some even without protective masks. “We cannot keep a tab on everyone,” said a nurse. “There is only so much we can do.”

Balu Khade, 58, got admitted to the hospital a few days ago with fever and breathlessness, but his swab was yet to be collected for testing (at the time of going to print). “I will also get infected with him,” says his wife, Sunita, tears streaming down her eyes. The Khades live in Dharavi, one of Mumbai’s worst hit areas with around 3,000 cases and 71 deaths. “It has been so long, but the disease does not seem to abate,” she said. “We have no work and no dignity left. We do not want charity and we do not care for this disease. This is the reason many people in our neighbourhood are afraid of coming out to even get tested or report the disease—the fear of quarantine, lack of beds and ill treatment. Nobody wants this.”

A few kilometres from the Sion hospital, stands the 95-year-old KEM Hospital, an institution which has been at the forefront of Mumbai’s battle against the pandemic from the beginning. Now it looks like a battered soldier who has given up the fight. Dreadful images of dead bodies of Covid-19 patients in body bags lying in the corridors of the hospital have been doing the rounds on social media. “We see 100-150 suspected Covid-19 patients every day. I have administered IV lines, catheters and oxygen tubes to patients lying on the floor. Some of those who died could sure have survived had they been transferred in time to the ICU. But we just did not have the beds or the ventilators. Neither do they have an option nor do we,” said Jay Savla, an intern. Ten of her batch-mates have been quarantined after testing positive.

Kirit Somaiya, vice president of the BJP in Maharashtra, described the chaos at KEM through the story of Sudhakar Khade. A resident of Lalbaug, Khade, 70, was admitted to KEM on May 14. He was shifted to the ICU on May 18 and was put on ventilator. The following day, the hospital informed his family that he was missing. The hospital authorities and the police failed to trace Khade, and his family was running from pillar to post. On June 1, Khade’s body was found in the mortuary of the hospital.

Yet another case of mismanagement was that of Constable Deepak Hate. He was treated for Covid-19 and discharged from the facility at the National Sports Club of India on May 31. He died in a few hours. “His son and daughter are admitted at Seven Hills Hospital and both are corona positive. His wife is awaiting a test report. I entirely blame the government for this misery of the Hate family,” said Somaiya. 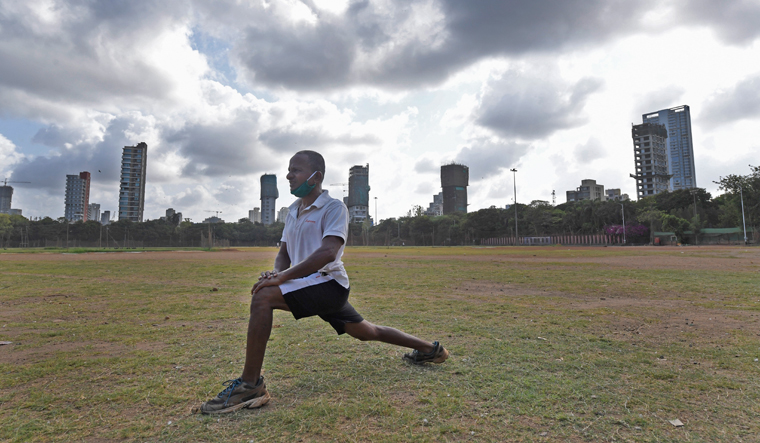 Lone Stretch: Usually Shivaji Park sees a lot of people—cricket players to joggers and walkers—in the morning, but these days very few people step out to exercise | Amey Mansabdar

The crisis has exposed Mumbai’s broken medical infrastructure, which suffers from an acute shortage of beds, ventilators, ambulances and medical staff. And the ever-changing policies have only added to the despair.

Antony Jolly, a resident of Andheri, recounted the horrific experience of an elderly woman who had to wait for hours to get an ambulance to take her husband to the hospital and later to take his dead body to the burial ground. The man was a suspected Covid-19 patient and no Christian burial ground was willing to take the body. “He should not have died in the first place,” said the woman over phone. “The moment he was feeling breathless, I took him to Seven Hills, but they sent us back home. From the next morning I was trying for an ambulance, which finally came four hours after he passed away.”

A report by the Maharashtra Medical Education and Drugs Department, which analysed data for 2,315 deaths, says 69 per cent of Covid-19 patients who died had comorbidities. “There is no doubt that a comorbidity makes the immune system weak, but there have been so many instances when non-Covid-19 patients, who had other medical conditions such as brain haemorrhage, stroke, kidney diseases and diabetes, have died because of the inaccessibility to medical infrastructure and unavailability of timely treatment,” said Dr Sudheer Ambekar, a neurosurgeon at Jaslok Hospital. “There have been instances when I could not find a bed for my own patients. A stroke patient I treated succumbed at a small nursing home when I found it impossible to get a hospital bed for him.”

The dense population makes it a huge challenge to control the disease in Mumbai. Those living in the slums in the Wadala area, one of the 717 containment zones in the city, have been demanding a long-lasting change in their living conditions and better facilities to fight the virus. “Our homes are not so big that we can be expected to stay indoors at all times,” said Mamta Tanshikar, who lives in a hut in Wadala with eight others. “If not of the virus, we will die of suffocation.”

The authorities have not developed a Mumbai-specific response to the pandemic. “Adequate contact tracing is still not happening. We need to test aggressively, especially in urban slums and poor settlements, because community transmission has stepped up in a big way,” said Brinelle D’Souza, faculty member at the Tata Institute of Social Sciences and co-convener of Jan Swasthya Abhiyaan in Mumbai.

On May 27, the Brihanmumbai Municipal Corporation set up a dashboard to map real-time availability of hospital beds for Covid-19 patients. D’Souza said the information on the dashboard was inconsistent. “It does not mention how many beds are available and occupied at private hospitals.” The BMC claims to have taken over 80 per cent of the beds in private hospitals. But it is not yet clear if these beds are a percentage of the hospitals’ total capacity or just a part of a certain number of available beds. 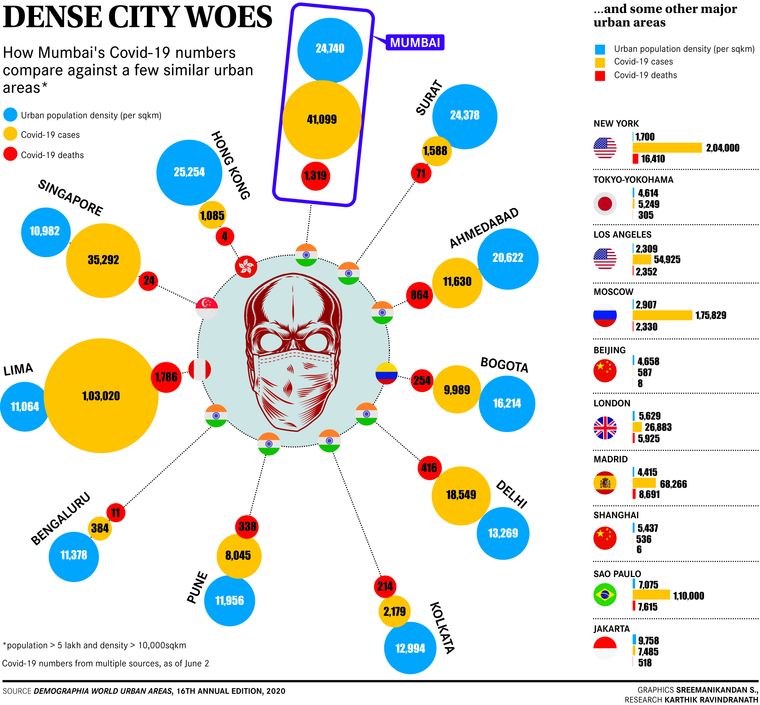 Nothing explains the situation in Mumbai better than the steady outflow of migrant labourers. Home Minister Anil Deshmukh said that more than 1.1 million migrant labourers had been sent back to their home states in the last month on 822 Shramik special trains. Amit Tiwari, a businessman from Kalyan on the outskirts of Mumbai, has been running a community kitchen for migrant workers with the help of his trader friends. “We organised 2,000 meals every day from the first week of lockdown,” he said. “Now the numbers have come down to 600 meals a day as many of workers have left for their hometowns.”

Mumbai has a long history of bouncing back from the worst. And Mumbaikars know that this too shall pass. But the coronavirus has had them pinned to the wall. And they are a bit worried that they have not yet found a way out.