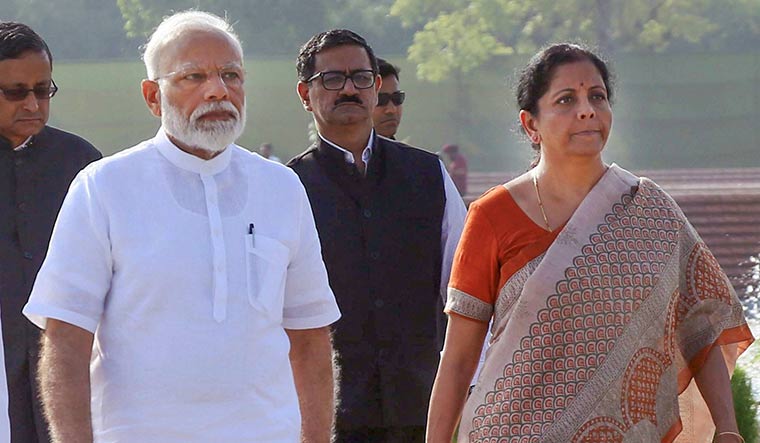 Economic crises are often opportunities in disguise. In 1991, the balance of payment crisis which forced India to pledge its gold reserve to raise money, set the stage for P.V. Narasimha Rao and Manmohan Singh to initiate reforms to liberalise the economy. Now the Narendra Modi government is using the Covid-19 pandemic-induced financial crisis to push for many held-up reforms to make India “self reliant”, with less government control and more privatisation.

The package announced by Finance Minister Nirmala Sitharaman revealed that the government had a different prescription for the ailing economy. In almost similar circumstances in 2008-09, prime minister Manmohan Singh focused on creating demand by giving cash transfers, a method which the Congress and a host of noted economists like Raghuram Rajan and Abhijit Banerjee still vouch for. 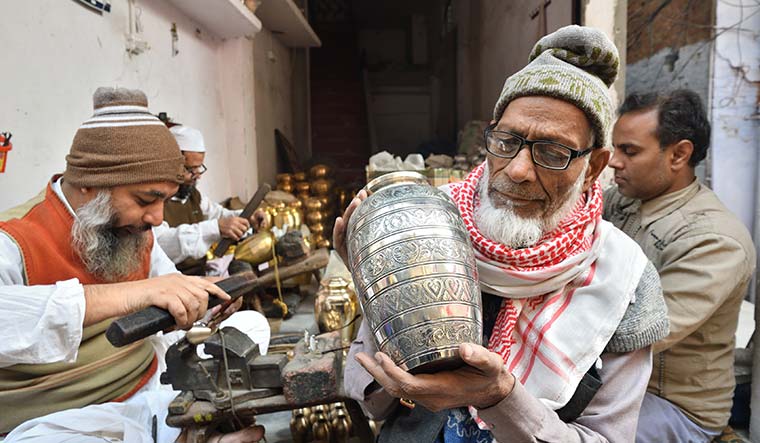 Holding on to hope: The reforms are expected to help small businesses stay afloat | Sanjay Ahlawat

The Modi government is betting on infusing liquidity into the system, extending easy loans to enterprises and preventing them from going bankrupt. The emphasis has been on securing the supply side. The message is clear—there are no free lunches for the industry. If there are hindrances in running a business, the government will remove it. Even the migrant labourers and the poor who were hit hard by the lockdown were provided support through the institutional methods of the Public Distribution System, the Ujjawla scheme for cooking gas and women Jan Dhan account holders.

Ironically, the Atma Nirbhar push has been used to dismantle the Nehruvian structures of self reliance—the public sector units—and amend the Essential Commodities Act 1955, which will help deregulate the agriculture sector. The government has opened up mining, aviation, defence, space and atomic energy sectors for greater private participation.

The package, however, fell short of the expectations of the market and the industry, which were expecting liberal cash handouts to boost demand. Rating agencies have calculated that the direct fiscal impact of the package may not be more than 1 per cent of the GDP.

“The package is just the first step,” said Pronab Sen, first chief statistician of India and the current chairman of the Standing Committee on Economic Statistics. “The package addresses only part of the concerns. The focus is on the supply capacity. There is little on demand side.”

Former finance secretary Subhash Garg said the economy was likely to contract by 5-10 per cent in 2020-21. “The package is unlikely to put the economy and businesses back on rail,” he said. “The disruption would take a lot longer to be put behind. The workers’ livelihood crisis is likely to persist. The pain will linger longer.”

The package came just a while ahead of the second Modi government’s first anniversary on May 30. And it gives a distinct flavour to the economic outlook for the rest of its tenure. Modi 2.0 began with pushing its ideological agenda, with Home Minister Amit Shah as the charioteer. The limping economy was a concern even before Covid-19 hit. The economic challenge, along with the social crisis fuelled by the movement of migrant workers, and chief ministers from the opposition parties asserting their rights, will test Modi in his seventh year in Delhi, his toughest in power so far.

The Covid management has brought to the fore the frayed relationship between the Centre, which was powered by the Disaster Management Act, and states. Congress ruled states said the Centre had been lukewarm to their demand for increased compensation. Even when the borrowing limits of states were enhanced, it came with conditions to undertake reforms.

Modi took the ownership of the fight against Covid-19 as he announced multiple lockdowns. The Centre led the disease management, with states implementing the protocols. It handed out an ‘economic vaccine’ based on what it thought was the main problem.

The industry had already been given corporate tax cuts a few months ago, but the companies had been reluctant to put back the gains into the system. So, this time they would have to do the work, while the government will play facilitator by removing hindrances, providing plug-and-play infrastructure, relaxing laws, and even keeping global players at bay.

Modi is pushing towards the empowerment route even to deal with the migrant crisis—they have to earn their living through the MNREGA in their home villages. And the states that are seeking more funds from the government have to initiate reforms to get that money.

Another focussed attempt by Modi has been his engagement with global leaders at the time of the crisis. He offered supply of medicines to most of the affected countries. This seems to have an immediate benefit, as India is wooing foreign players to move here from China.

While the government had said it was not turning protectionist, Modi has always kept his political constituency in mind. He refused to be part of the Regional Comprehensive Economic Partnership last year. By calling for the Atma Nirbhar push, he has again taken hold of the political messaging. “Earlier, policy makers never trusted indigenous talent and knowledge. Modi’s call is a pleasant departure from the policy based on globalisation and liberalisation. It is time to revive those local industries that were taken for granted in the era of globalisation,” said Ashwani Mahajan, national co-convener of Swadeshi Jagaran Manch.

A major beneficiary of the liquidity infusion has been the micro, small and medium enterprises. The sector, which had not fully recovered from the demonetisation and the implementation of the goods and services tax, has further wilted under the lockdown. The government has announced a three lakh crore-rupee collateral-free loan facility for MSMEs and a Rs 30,000 crore liquidity facility for non-banking financial companies. These measures have been coupled with relief in insolvency measures.

Many experts, however, have not been impressed by the numbers. “The relief which the government has given is through the financial system, and the government’s contribution is more in terms of giving guarantee,” said Madan Sabnavis, chief economist at Care Ratings. “The government has only worked on the supply side, which enables production. There has not been much adding to the demand. Today, the problem in the economy is demand.”

The reforms announced by Sitharaman also received a mixed response from experts. “The government’s focus has been on bringing about short-term and medium-term reforms, where changes will happen in 1-3 years in power sector reforms, aviation, discoms and defence,” said Sabnavis.

The major reform measures announced have been for the public sector enterprises as the government plans a new policy and opens up these sectors for privatisation to free capital locked in PSEs. Another key unshackling has been done in the Essential Services Maintenance Act and the Agricultural Produce Marketing Committee Act so that farmers would get better value for their produce. This will also help the food processing industry to realise its potential and in creating food supply chains.

Other reform announcements include allowing private participation in coal mining, relaxing foreign direct investment limit from 49 per cent to 74 per cent through automatic route in defence manufacturing, privatising discoms, and private participation in aviation, atomic energy and space sectors. Most of these reforms have been on the table for many years, but the government was not able to bite the bullet owing to political pressure.

Sen, however, is sceptical about the reforms. “As a statement of intent, it is fine,” he said. “But will they see it through? That’s why I am sceptical.”

Modi’s risks are two-fold: economic and political. The economic recovery is expected to be painfully slow given the additional pressure of the global recession. But at home, the political cost of the pandemic is what the prime minister and the BJP machinery will have to handle to tide over the anger and disenchantment over the manner the migrant crisis was handled.

The Centre for Monitoring of Indian Economy has estimated that India’s unemployment rate climbed to a staggering 27.1 per cent in May and some 121.5 million Indians were out of jobs. “A little more gradual and sequenced lockdown limited to businesses and places that carried higher risk of coronavirus instead of a hurriedly imposed total lockdown possibly would have been better,” said Garg. “Even when the total lockdown was imposed, migrants should have been allowed to go to their villages in the first week of lockdown itself. In fact, the government and society should have facilitated their transportation.”

The government has allotted an additional Rs 40,000 crore to this year’s existing budget of Rs 61,000 crore under MNREGA so that workers who had returned home get employment. It has also given additional free grain to migrants not covered under the PDS. Some eight crore people who are not part of any institutional schemes are expected to benefit from it.

The government said it would encourage rental housing for migrants in cities to improve their living conditions. A detailed policy is awaited on how land can be allotted and private sector would be roped in with some incentives to the project.

As the migrant labourers who have returned home are unlikely to go back soon, the Hindi heartland states are worried. Bihar Chief Minister Nitish Kumar has trouble at hand as the state is struggling to employ these workers and handle the increasing Covid-19 cases. The BJP, which is his ally, has been employing its workers at the booth level to engage with the migrants in an attempt to contain the damage.

The BJP is also undertaking a massive awareness drive to sell the economic package to the people, hoping that Modi’s image would help the party deal with the disenchanted population. That might not be easy, as the opposition parties, farmers’ groups, labour unions and traders’ bodies have already started murmurs of protests that are likely to grow louder as the country slowly returns to normalcy. The opposition says that the government pushed for reforms without proper consultations and they should be debated in Parliament so that effective pressure can be built on the government along with shaping the public opinion which was still caught up in surviving the pandemic.

Congress chief ministers Amarinder Singh and Ashok Gehlot have been critical of the Centre’s fiscal management. It was only during the fourth phase of the lockdown that states were given powers to devise rules. Their demands for increased allocations have been met only partially. The blame game will continue.

While Shah has been away from the spotlight, he has been active behind the scenes doing what he does best—pushing the ideological agenda. The lockdown measures were done under his supervision. The construction of the Ram Temple has resumed as soon as the lockdown measures were relaxed. The religious symbol for sure will be used to subsume the anti-government sentiment when the construction will be in full swing.

The relaxations in the lockdown, ironically, have come at a time when there is a rise in the number of Covid-19 cases. The uncertainty that the pandemic has brought with it has been the biggest challenge for the political class. It has been relatively silent, but it is getting active. The war of words over relief packages is the first sign.