Bhilwara experience shows that hospitals can become epicentres of infections 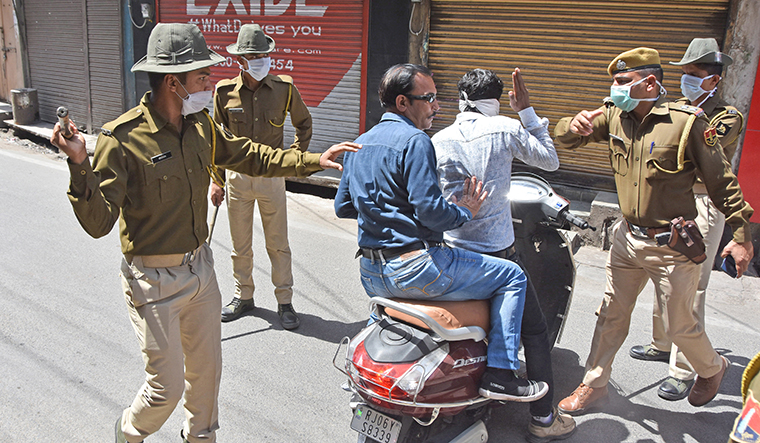 On March 19, a few days before Prime Minister Narendra Modi announced the national lockdown, Bhilwara district in Rajasthan was put under curfew. Schools, colleges, offices and commercial establishments were shut. Borders were sealed and checkposts were put in place at the 14 entry and exit points of the district.

The extreme measures were triggered by the shocking revelation that six doctors and support staff at the Brajesh Bangar private hospital were infected with Covid-19. A total of 6,192 patients had visited the hospital between February 20 and March 17, before the infected doctors and their co-workers were quarantined at the government-run Mahatma Gandhi hospital.

As soon as the test results reached the state administration on March 19, a rapid response team comprising 307 members was rushed to Bhilwara. The hospital was sealed, and a radius of one kilometre around it was declared a zero-mobility area.

“We have never seen something like this in Bhilwara. The entire town has been shut down. People are not allowed to go out even to buy household items,” said Manish Sharma, an executive with a pharmaceutical company. He said the people were gripped by fear because thousands had visited the affected hospital.

As Bhilwara, a textile manufacturing hub, turned into a ghost town, the district administration launched perhaps the biggest Covid-19 screening exercise in the country. In a mammoth door-to-door survey, as many as 332 teams visited around one lakh households, covering five lakh people in urban Bhilwara, while 1,950 teams screened 19 lakh people in the rural areas of the district.

The questions asked in the survey were about the health condition of the members of the household: whether any of them had recently visited a foreign country or met someone who had done so, whether anyone in the family was suffering from cold, cough or fever or whether they had visited the Bangar hospital or had come into contact with a Covid-19-infected person. Following the survey, 11,000 people with influenza-like symptoms were put on a watch list, around 7,000 people were quarantined at home and 149 people were tagged as high-risk cases. Of the 149, 133 had returned from abroad recently.

“We are identifying high-risk suspects—those above 65 with co-morbid conditions like diabetes and hypertension. They are being kept under watch and if anybody has a travel history or was in contact with any person with a travel history, we are conducting tests on them,” said Rohit Kumar Singh, additional chief secretary (medical, health and family welfare).

As of March 31, 1,355 samples were tested and 26 positive cases reported. Two patients, who were earlier admitted to the Bangar hospital, and subsequently tested positive for the virus, have died. However, authorities have attributed the deaths to co-morbidities. So far, all positive cases are of the medical staff of Bangar hospital, of patients who were treated there and of people who had contact with them.

“There is an upward graph when it comes to the number of cases being reported from Bhilwara. But that is because we are screening and testing more people,” said Dr Arun Gaur, principal medical officer, Bhilwara. He said 500 isolation beds were ready—200 in government facilities and 300 in private hospitals. The local administration has commandeered five private hospitals in the district in addition to hotels, resorts, lodges and dharamshalas to create quarantine facilities for around 15,000 people.

Health Minister Raghu Sharma rejected Bhilwara’s description as 'India's Italy' and the rumours that the disease was entering the community transmission phase in the district. “It is completely wrong to say that Bhilwara has become India's Italy. The health department and the local administration are in complete control. The chief minister has been monitoring the situation through daily video conferencing,” said Sharma.

There is, however, lack of clarity on how the virus reached the Bangar hospital. One of the probabilities is that the index case may have been a patient who was admitted on March 8 to the intensive care unit with pneumonia-like symptoms. He was later treated at two different hospitals in Jaipur before his death.

Another possibility of the infection coming to the hospital is through a doctor who had allegedly received guests from Saudi Arabia at his residence. However, the doctor in question, Dr Niyaz Khan, who was tested positive, denied the allegation through a video message from the ICU facility in Jaipur where he is admitted. “I don't have any relatives with any connection with Saudi Arabia. My wife is not positive (for the virus). This is fake news,” he said.

The Bhilwara experience shows that hospitals can become epicentres of infections and points to the need for a more extensive testing regimen. Authorities have charged the Bangar hospital with irresponsible behaviour and are mulling action. “There was huge carelessness on the part of the hospital,” said Singh. “They should have informed public health authorities because it is not just their own people. [The safety of the] whole district was at stake. Let things settle down, then we will take action against the hospital.”