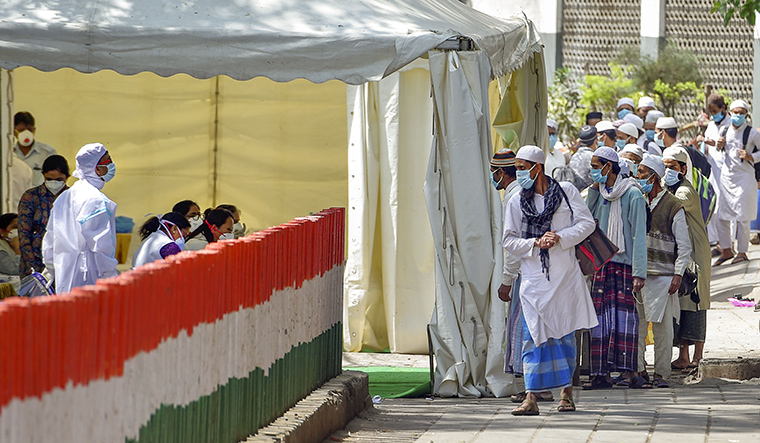 Risky affair: Around 4,000 Jamaat followers visited the Markaz for a congregation which began on March 13 | PTI

The Nizamuddin Markaz Masjid was always famous. The mosque, in South Delhi’s densely populated Nizamuddin area, is the international headquarters of the Tablighi Jamaat, an Islamic proselytising movement with millions of followers globally. But it has now become infamous as a hotspot for Covid-19.

The travel history of Jamaat followers within India is troubling. On March 21, more than 800 foreign followers and over 2,000 Indian followers were doing missionary work across the country. The Jamaat’s activities halted only after the lockdown in Delhi on March 23, followed by the national lockdown.

The lapses which allowed proselytising to turn into a public health risk were many. The first was the granting of tourist visas to Jamaat followers. Foreigners taking part in a religious conference have to apply for a business or conference visa. The Bureau of Immigration had flagged the issue a few years ago.

Also, for the janta (people’s) curfew on March 21 and the national lockdown, the Markaz was left to decide its own fate. And, even as the manhunt for the ‘Tablighi Jamaat tourists’ was under way, National Security Adviser Ajit Doval had to intervene to convince the Jamaat to cooperate.

Arun Choudhry, former special director, the Intelligence Bureau, said that there should be an inquiry into the issuance of tourist visas. He also criticised the Delhi government for not taking preemptive steps. Delhi Police has registered FIRs against the maulana and five others, under Epidemic Diseases Act, 1897.

The Markaz administration said their programmes are decided a year in advance and that its premises were used by stranded visitors with prescribed medical precautions. They also blamed the social media for spreading rumours that Covid-19 patients were present at Markaz.

However, Islamic scholar Ghulam Rasool Dehlvi, said that it was unsettling that the Jamaat was contradicting the Quran’s exhortation of obeying the law of the land. He added that the Jamaat’s actions had impacted the image of Indian Muslims and that this could be “used by anti-national elements”.

Indian intelligence agencies have been keeping watch on the Jamaat’s activities, and while no extremist links have been found, it is known for secrecy—it does not share details of its visitors with security agencies. What remains to be seen is whether rules will be tightened for the Jamaat. But, continued secrecy is unlikely.