Kerala has been managing Covid-19 effectively, but it has many reasons to worry about 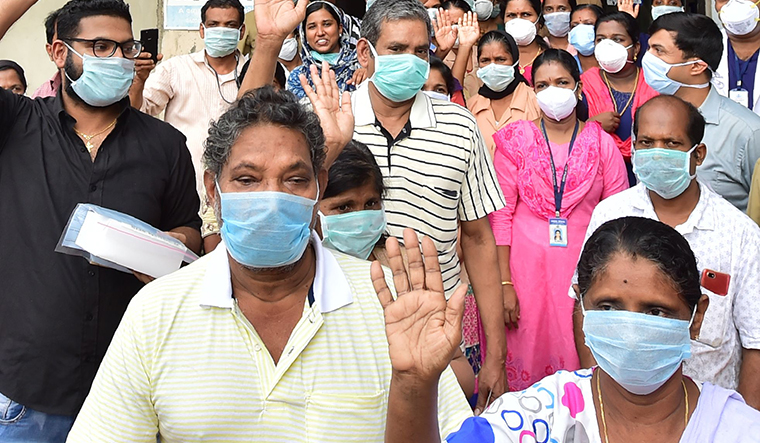 Care and cure: Members of a family from Pathanamthitta who were cured of Covid-19 with hospital staff | Aravind Venugopal

Kerala had reported its first case of Covid-19 much before Italy and most of the world did, leaving alone China. Yet, till March end, the state saw only two deaths; the health team even performed a miracle—they saved a 93-year-old man and an 86-year-old woman.

That is a matter for worry, too. Much like western Europe, the state has high life expectancy, leading to big numbers in the high-risk age group. Second, the densely-peopled state lacks enough space for social distancing. Third, thanks to the high standard of living, about 71 lakh people suffer from one or more lifestyle diseases like hypertension, diabetes and cardiac problems. Add cancer to this mix and things get even more complicated.

“The proportion of both the risk factors—higher proportion of people in the high risk category of 60-plus and people with other illnesses—are high in Kerala,” said Dr B. Ekbal, chairman of the state government’s advisory committee on Covid-19. “That is going to be a huge challenge, as the spread is easy among this vulnerable group.” The state’s large number of NRIs also is a cause for worry. As Ekbal pointed out, many of them have broken quarantine.

Kerala’s health managers are aware of the hazards. With a green signal from the Indian Council of Medical Research, they are rolling out rapid tests, starting with the worst-hit districts of Kasaragod and Pathanamthitta. This is to identify and stop possible community spread. “We are preparing for both the best-case and the worst-case scenarios,” said a health ministry official. “In the best case, the infected may be less than 50,000; in the worst it could be as high as 60 lakh. On a realistic note, we may get it somewhere in between.”

The government has created an open-source Corona Safe Network comprising doctors, paramedics, software experts, coders, data analysts and top-level government officials, which will report to the chief minister. This network, the government hopes, will connect all the dots in case of a community spread. “Everything, including the possible number of infections in an area, possible deaths, availability of hospital beds, food delivery management, number of medical and paramedical staffs, availability of ambulances, blood banks and volunteers will be interconnected through this software,” said the official.

Knowing that the state’s 30,000 hospital beds and 12,000 ICU beds—though it is more than what most states have—may be too few in case of a mass spread, the state is turning schools, colleges and other such spaces into hospitals. Retired doctors and medical students are also being requested to volunteer. “We have a socially conscious public and a very cooperative private sector,” said Health Minister K.K. Shailaja. “The managements of most private hospitals and educational institutions have offered to convert their institutions into hospitals. They include institutions run by all religious groups.”

Said Dr Joy Elamon, director of the Kerala Institute of Local Administration: “We have an excellent public health care system at the primary level, and a decentralised disaster management plan. Kerala is the only state which has minute data bank till panchayat level. Containing the pandemic and poverty alleviation are going hand in hand. Ideally, that should be the case everywhere.”