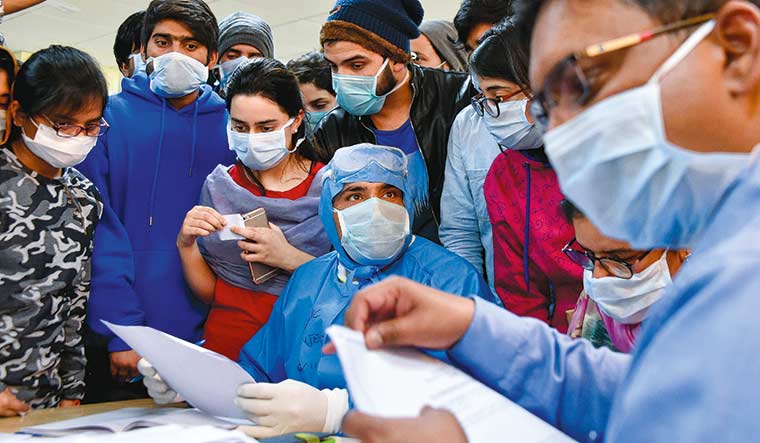 It is a war. And somewhere, the world forgot to be battle-ready. Slowly though, it is realising that one of the biggest threats to its people and economy is from a virus that cannot be seen without a microscope that has a resolution power of over a hundred thousand. With several drugs and a vaccine still at the experimental stage, caution is the only weapon against SARS-CoV-2 (the most recent strain of the severe acute respiratory syndrome coronavirus) that has infected more than 17 lakh people and killed more than 7,000. Measures like isolation, quarantine, social distancing, hand hygiene and respiratory etiquettes are the only hope.

India though had a slow start, with just three patients, even as countries such as China, Italy, South Korea and Iran struggle with the deluge of Covid-19 patients. But the lull did not last long, as cases began to surge in the first week of March. As on March 18, India has reported three deaths and 134 active cases, with 14 patients discharged. Since the uptick in cases, several measures have been taken to quarantine India from the world, including cancelling visas and stopping all traffic from the United Kingdom and European countries. Within the country, too, several states are at different stages of lockdown. But, will India see a surge in the epidemiological curve?

“We are still at stage 2 (local transmission from infected persons) of the disease. And there is no evidence of community transmission [Stage 3] yet,” said Dr Balram Bhargava, director general, Indian Council of Medical Research. Besides the testing of samples at 121 laboratories across the country, he said a study with 1,000 samples was currently evaluating the possibility of community transmission of the disease. On March 17, Bhargava said that private diagnostic labs, too, would be roped in to test samples.

So, what does that mean for India? As in other countries, the Indian government, too, is banking on isolation, quarantine and social distancing to stall the escalation of the disease into the next stage. Lower traffic of international travellers, especially from Covid-19 affected countries, has helped, too. But given the population density, varied climate, skewed health systems and lack of compliance on quarantine, more needs to be done, said experts.

“Viruses don’t kill people, it is the health care system that does,” said a senior health ministry official working on Covid-19 management. Agreed India’s top virologist Dr T. Jacob John, who pointed to the need for a robust public health system. “The spread of the virus cannot be contained, but minimised,” John told THE WEEK. “Measures such as screening of air travellers and contact tracing must continue. These will not prevent importation, but slow its speed. A time will come when the sheer volume of contacts will not be amenable to tracing and testing. By then all hospitals must have simple and practical steps taught to them so that all who go to a health care facility—primary, secondary or tertiary—will have clinical screening and comprehensive lab diagnostic tests for all diseases including Covid-19.” He added that the crucial time for preparing—between early February, when the second case was confirmed in Kerala, to early March—has already been lost. 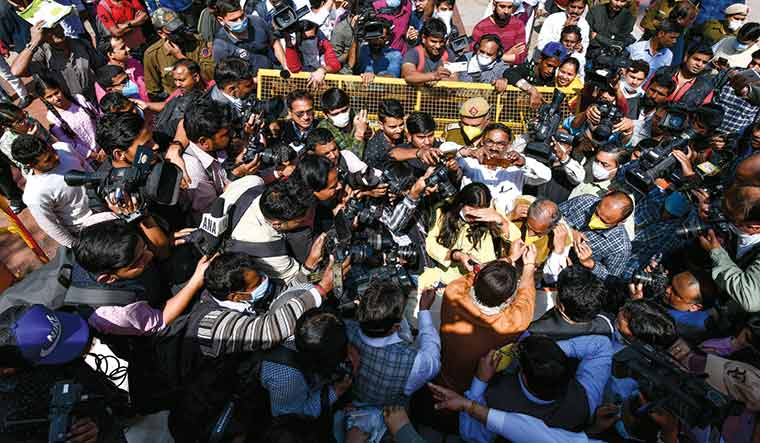 “Laboratory diagnostic support service is grossly inadequate at all levels of health care institutions,” said John. He cited the example of district hospitals, which provide secondary-level care to one to three million people, lacking competent microbiology labs that can test basic bacteriological and virological samples. “How can health care personnel provide quality service without quality-assured lab tests? Same holds true for intensive care and life supporting equipment,” said John. Also, in the private sector, care, quality and cost are not regulated. “So, the solution is to establish quality auditing of all private hospitals, and ensure minimum standards in every hospital,” he said.

Other challenges on the diagnosis front remain, too. “For a doctor, the big question now is: how does one diagnose accurately when a patient presents with symptoms of common cold or flu? Knowing the genome of the virus is one thing,” said Dr Kalpana Swaminathan, Mumbai-based surgeon and author. “It is good we have that. But what does that mean for a doctor on the ground treating patients of common cold and flu all the time?”

From doctors on the ground to researchers at the global level, the virus has managed to confound a range of experts. Though projections about the virus infecting about 60-70 per cent of the world’s population eventually are doing the rounds, infectious disease experts are baffled by how not enough is known about the virus even three months down the road.

India though is not new to outbreaks, having dealt with Nipah, Zika and other seasonal outbreaks such as H1N1. While every outbreak poses a unique challenge for health systems, experts say that the principles of prevention, detection and response to infectious outbreaks are more or less same. “There are lessons to be learnt from earlier outbreaks,” said Dr Mahesh Devnani, associate professor and joint medical superintendent, department of hospital administration, Postgraduate Institute of Medical Education and Research, Chandigarh. “However, Covid-19 will require significantly more effort and at a much larger scale, keeping in view of the magnitude. Besides, health systems in different states of India are not equally robust, so public health system strengthening is the key. And, we need to invest more on preparedness in the intervening periods between epidemics.”

Devnani also stressed on other policy changes that are required. “Though India is a signatory to International Health Regulations 2005, it has not yet conducted a joint external evaluation (JEE). Though voluntary, JEE can assess India’s preparedness for epidemics so that appropriate efforts could be made to fill the gaps,” he said. Also, a ‘National Strategic Stockpile’ of medical countermeasures such as drugs, consumables and medical devices should be created, he said, which could be promptly mobilised during an emergency when local and state supplies run out. “The Public Health (Prevention, Control and Management of Epidemics, Bio-Terrorism and Disasters) Bill, 2017, which lapsed with the 16th Lok Sabha, needs to be brought back with modifications,” added Devnani.

Experts said a big challenge is lack of hospital infrastructure. “For India the major challenge is going to be our lack of intensive care beds, equipment and trained personnel,” said Thomas Abraham, associate professor, University of Hong Kong. “This is a disease where 80 per cent of those infected have mild or undetectable symptoms. But 10 to 20 per cent, particularly those with existing underlying illnesses, will require intensive care. We do not have the capacity for this at present, particularly as we travel away from the metros.” As Covid-19 is a highly transmissible disease, to which people have no pre-existing immunity, it will rapidly spread through communities. “How will the hospital system cope with Covid-19 cases in addition to all the other cases that require care? Is the private sector ready to manage Covid-19 cases? This should be a wake-up call to Central and state governments to invest much more heavily in their health care systems than they have at present,” said Abraham, also the author of Twenty First Century Plague: The Story of SARS and Polio: The Odyssey of Eradication.

There is the challenge of individual compliance, too. “Several cases where individuals have either hid their travel histories and/or not followed home quarantine measures are being reported,” said a senior government official. “We cannot enforce these measures. It is about being a responsible citizen. If people don’t care about their loved ones and their countrymen, there is only so much that can be done.”

The big question now is: can the government and the people rise up to the occasion to win a fast losing battle?