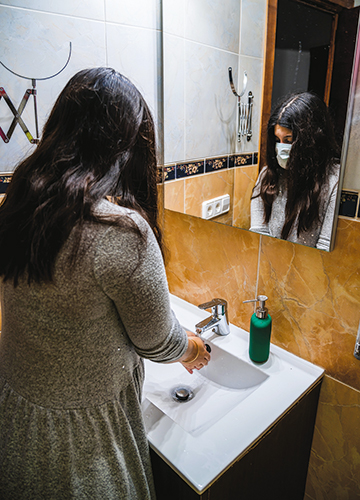 As Covid-19 snaked its way around the world, Atul Khurana, 48, became “abnormally anxious”. He refuses to go to work and to let his children out to the playground, and ensures that anyone who visits him sanitises their hands, wears a mask and avoids contact. The Khuranas wear surgical masks all day and Atul sometimes even sleeps with it on.

A patient of depression and anxiety disorder, Khurana has been put on mild anti-depressants and cognitive behaviour therapy by Dr Natasha Kate, psychiatrist, Masina Hospital, Mumbai. He was on clinical remission for a year and had recently been to the US for a project. “This is a case of exaggerated anxiety in a patient who is already suffering from anxiety,” said Dr Kate. “He took his travel history as a major risk factor. He is unable to sleep at night because of this worry, and at the same time, he is refusing to get himself tested, fearing he might catch the virus there.”

As the grim news of Covid-19 deaths streams in, those with anxiety and phobias are taking to anti-depressants and tranquillizers to deal with the situation. Ashutosh Bakhai, a 35-year-old father of two, who works for an investment firm, has had a history of frequent anxiety and panic attacks. “He knew somebody related to a person who was found to be positive and was quarantined. That did it,” says Avinash Dsouza, a psychiatrist in Mumbai. “It led him to feel even more anxious. Also, he was worried that the markets would crash and the investments he made for his company would fail. He had frequent panic attacks, breathlessness, chest pain and sleepless nights.” Dsouza put Bakhai on low dose injectable tranquillizers.

“Every time they see a person coughing or sneezing their psychological alarms go off: ‘What if I get infected and the state runs out of drugs to treat me? What if they quarantine me and take me away from my family? What if that door knob was carrying the virus?’ Such questions are on their mind all the time,” said Dsouza.

This has been found to be the case also with those suffering from obsessive compulsive disorders (OCDs). Sheela Ghai, a homemaker, would wash her hands 10 to 15 times an hour. Since the outbreak, the frequency has spiked to 20 to 25 times.

“Covid-19 is a real threat and anxiety is a natural protective response,” said Urvakhsh Mehta, associate professor of psychiatry, NIMHANS, Bengaluru. “Though you need a fire alarm, an anxiety disorder is a fire alarm that goes wrong. If it is too sensitive to even a little smoke, it causes panic.”

(Some names have been changed on request.)