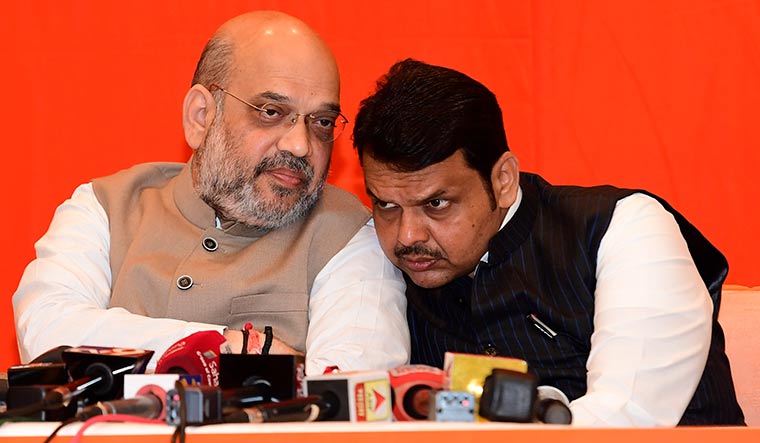 When the boss speaks: Amit Shah and Devendra Fadnavis at a news conference before the elections | Amey Mansabdar

During the heady days of 2014, the BJP under its new president Amit Shah gave the party new swagger. The saffron party did the unthinkable as it contested alone in Maharashtra, seeking to break the ‘big brother’ mould of its oldest hindutva ally, the Shiv Sena. The strategy paid off and the BJP emerged as the single largest party in Maharashtra and a few other states. Within the next four years, the BJP captured the entire Hindi heartland. Now, as Shah prepares to vacate the party chief’s post for J.P. Nadda, the party is staring at a shrinking footprint. Ironically, this comes at a time when it improved its tally at the Centre.

There is dismay in the BJP over the bruising the party received in Maharashtra. Despite joining hands with the ‘tainted’ Ajit Pawar to teach the Shiv Sena a lesson, the BJP’s plans came a cropper. Some in the party were also of the view that the new unlikely Shiv Sena-NCP-Congress partnership should have been allowed to collapse like the Congress-Janata Dal (Secular) alliance in Karnataka.

The BJP had moved cautiously in Karnataka in 2018 as the Lok Sabha elections were around the corner. But now, the swift, behind-the-scenes operation by the Sharad Pawar-led group has left the BJP embarrassed. “You miss 100 per cent of the shots you do not take,” said BJP IT cell chief Amit Malviya, considered close to Shah. The attempts to form a government at all costs has been the BJP’s mantra for the last a few years.

The party’s aggression to expand its reach has put off some of its allies as many of them want more space. The Lok Janshakti Party and the All Jharkhand Students’ Union will contest alone in the upcoming Jharkhand polls as the BJP did not give them more seats. Any adverse outcome there is likely to impact the Bihar elections next year, where the BJP shares an uneasy relation with the Janata Dal (United). 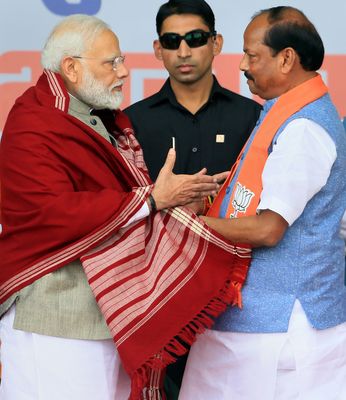 The worry for the BJP could be that its opposition, which was in disarray till a few months ago, could solidify in the coming months.

The BJP’s Maharashtra leaders were also angry that they had been asked not to retaliate to the repeated insults by the Sena in the last five years. Even after the elections, when the Shiv Sena did a volte-face on the alliance, BJP leaders were instructed not to attack the party. It was only when it became clear that their pre-poll partner was going the other way that they began speaking out.

“It is an unnatural alliance between the Shiv Sena and the NCP-Congress,” said Rajya Sabha MP and BJP vice-president Vinay Sahasrabuddhe. “Maharashtra had given a mandate to the BJP and the Shiv Sena. The Sena is going against that mandate. We never asked for the chief minister’s post, even when we were merely 10 seats less than them. We were earlier the younger brother, now it was the other way around. It happens in politics.”

There are several takeaways from the elections results of Maharashtra and Haryana. The Marathas and the Jats, the dominant caste groups in these states, voted for parties that represented their interests as the BJP went against convention by giving the chief minister’s post to people from other upper castes. Had Dushyant Chautala’s Jannayak Janta Party allied with the Congress in Haryana, the situation would have been similar to the one in Maharashtra. Secondly, the attack mounted by central investigating agencies against opposition leaders ahead of elections may not have had the effect desired by the BJP. Bhupinder Singh Hooda emerged stronger in Haryana, as did Sharad Pawar in Maharashtra.

Ironically, the biggest loss of face for the BJP after the current fiasco has been its anti-corruption plank. In Haryana, Dushyant’s father, who is in jail in a corruption case, was immediately given parole, and the cases against Ajit Pawar in the irrigation scam were also withdrawn. Though the investigating agency clarified that none of the cases where Pawar is being investigated have been impacted, the message had gone across.

“Its saddens me to see how the situation turned out in Maharashtra,” BJP ally LJP’s party chief Chirag Paswan told THE WEEK. “Till recently, Devendra Fadnavis said that Ajit Pawar would be sent to jail on corruption charges. Now, suddenly, all those charges are gone.”

The BJP would need to rework its strategy to counter attacks from the opposition and even allies on how it dealt with these cases. The managerial skills that have, in the past, helped the saffron party control the narrative even when faced with challenges, have been found wanting. Allies are now demanding better coordination within the NDA. Though Chirag was vocal about his demands during the NDA meeting before the Parliament session, other allies like the Akali Dal and the JD(U) appeared disinterested.

“Every party has it own aspirational design, and accordingly, they decide their strategy. But the situation is not as alarming,” said Sahasrabuddhe, about ally trouble within the NDA, particularly in Jharkhand. There lies the next big test for the BJP. The party is facing a tough challenge in Jharkhand, according to insiders. Both Modi and Shah talked about the Ayodhya Ram Temple during their speeches in the state. The outcome of the election could show how much and for how long national issues would matter in state elections, as the abrogation of Article 370 in Kashmir did in the Maharashtra elections. At the national level, though, the Modi-Shah duo remains untouched.