Congress chose ideological compromise to salvage itself in Maharashtra 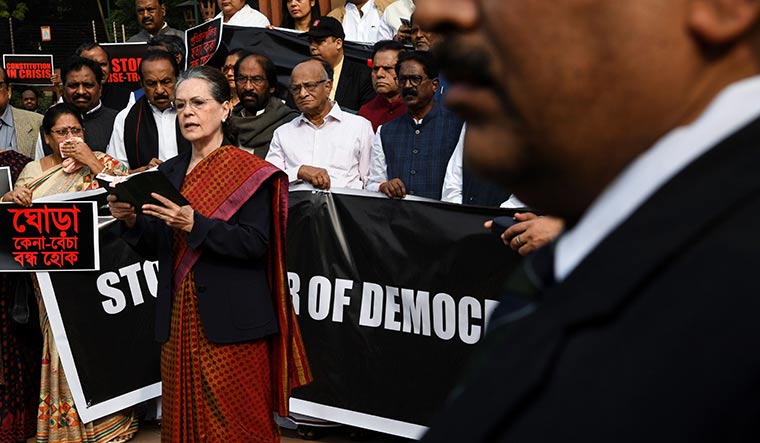 Leading from the front: Congress president Sonia Gandhi at a demonstration against the BJP on November 26 in Delhi | AFP

Congress president Sonia Gandhi was a picture of aggression and determination as she led a joint opposition protest against the BJP’s “unconstitutional actions” in Maharashtra. “Absolutely”, was her emphatic reply when asked if the Shiv Sena-Nationalist Congress Party-Congress alliance would form the government in Maharashtra. That was a huge departure from her initial reservations about joining hands with the Shiv Sena. Other leaders, including former party president Rahul Gandhi, were not in favour of allying with the Sena.

However, the shock of November 23, when the BJP’s Devendra Fadnavis was sworn in as chief minister, jolted the Congress into action. The progression, from shock to fury to disappointment and finally the resolve to fight it out, was rapid. A Congress leader, who had flown to Mumbai to negotiate with the Shiv Sena and the NCP, said that he felt that NCP supremo Sharad Pawar had backstabbed them. There had been a trust deficit with Pawar from the start as the central leadership of the Congress was never sure about his true intentions. However, after the sudden turn of events, the Congress gave him the benefit of the doubt and took it upon itself to fight the case as he set the NCP in order.

“They (the BJP) had shown deplorable political immorality to grab power at any cost,” said K. C. Venugopal, general secretary (organisation), All India Congress Committee. “The prime minister and BJP leaders were directly involved in this murder of democracy. We fought against it inside Parliament and in the Supreme Court.”

The choice for the Congress was between the ideological compromise that had to be made while joining hands with the Shiv Sena or staying out of power and being faced with the prospect of leaders leaving and the organisation withering away. As many as 32 MLAs of the Congress and the NCP had joined the BJP ahead of the assembly polls and a repeat of that was feared if the BJP came back to power in the state.

Congress leaders pointed out that they had taken sufficient time to sit down and thrash out a working relationship that kept out contentious issues. “Differences with the Shiv Sena are almost all sorted out,” said AICC treasurer Ahmed Patel, who was involved in the alliance talks as a representative of the party chief.

The Congress expects the Shiv Sena to mute its hindutva rhetoric for the sake of governance. There is expectation that the Shiv Sena, which has waited long for the cheif minister’s chair, will desist from doing anything that would rock the boat. A Congress leader said the common minimum programme for governance, which commits the government to “adherence of the Constitution”, would guide the coalition to focus on people’s issues and not ideology.

Congress leaders also talk about the tacit understanding between the Congress and the Shiv Sena in the late 1960s, which was utilised by prime minister Indira Gandhi to keep left trade unions in Mumbai in check. Shiv Sena founder Bal Thackeray had famously backed the Emergency. More recently, the party had supported the Congress’s presidential candidates Pratibha Patil and Pranab Mukherjee. And of late, it has praised former prime minister Manmohan Singh.

Moreover, the developments in Maharashtra have reverberated nationally, with the Congress mobilising a campaign involving other like-minded parties against the Modi regime’s alleged misuse of power to install a BJP chief minister in the state.

As for the coalition itself, more than ideology, the Congress is likely to find the challenges of power sharing difficult. It will be the third player in the government, and will have to deal with watching the NCP play a more dominant role. But the Congress, which seems to have ended up in the ruling side almost by accident, may not be aiming for much at present.