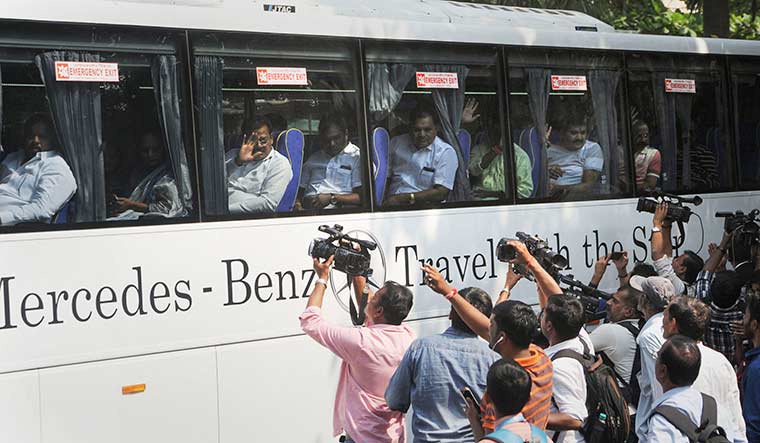 Wheeling and dealing: Shiv Sena MLAs being moved to a hotel on November 25 | PTI

On November 23, at around 7am, Nationalist Congress Party president Sharad Pawar found out that Devendra Fadnavis had been sworn in as Maharashtra chief minister and Ajit Pawar, his nephew and leader of NCP legislature party, was Fadnavis’s deputy. Shaken to the core, Pawar reportedly rang up Ajit, but his phone was switched off. This triggered the endgame of the game of thrones that had begun after the state election results were declared on October 24.

Having had no luck with Ajit, Pawar then called Uddhav Thackeray. After a brief chat, the two agreed to hold a joint media briefing. By that time, senior NCP leaders had rushed to Pawar’s residence in South Mumbai. They soon listed the names of all NCP legislators and began dialling them one by one, only to deliver a terse message: “Saheb has called an urgent meeting, all must be present.”

According to an NCP insider, at first, 23 of the 54 legislators were not reachable. This caused panic in the NCP and a team of strategists began tracing them furiously. Meanwhile, Dr Rajendra Shingne, a legislator present at the swearing-in ceremony, had managed to slip out. He rushed to the Silver Oak residence and told Pawar what had happened.

“Around 12 at night, I received a call from Ajit dada,” said Shingne, a former minister. “He told me there is an important meeting at 7am at B-4, the bungalow of [NCP MLA] Dhananjay Munde. When I reached, Ajit dada was not there, but a few other legislators were present. All of us were then taken to the Raj Bhavan. We had no clue why we were going. Soon, Ajit dada and Fadnavis arrived and took oath. That is when we felt something was amiss. So, I decided to rush to Pawar saheb’s residence.”

Pawar later said that Ajit had taken two lists, with signatures of NCP legislators, from the party office and had submitted these to Governor B.S. Koshyari. “[This gave] an impression that the NCP was forming the government with the BJP,” Pawar said at a news conference after the swearing-in. “Ajit has taken this decision in his individual capacity. Those who want to join him must remember that there is an anti-defection law.”

The needle of suspicion was pointing at Dhananjay, as it was at his bungalow that the legislators had gathered. However, later in the day, Dhananjay claimed his innocence and said he was at his friend’s place and had only woken up at 1pm. “I was not aware of the secret plan of Ajit dada. My bungalow has been misused and I was not there,” Dhananjay told senior party leaders.

In the evening of November 23, the NCP moved its legislators to Hotel Renaissance in Powai, the Shiv Sena took its flock to Hotel Lalit and the Congress took its MLAs to JW Marriott in Juhu. They were instructed not to step out of the hotels.

The following day, in a series of tweets, Ajit said he was with the NCP, and that the BJP-NCP alliance would provide a stable government. This left everyone wondering whether he had been acting with Pawar’s approval.

The NCP president, however, said that Ajit’s statements were false.

Despite the rift between uncle and nephew, NCP leaders continued to woo Ajit. On Monday, November 25, Sunil Tatkare, Dilip Walse Patil and Chhagan Bhujbal held a four-hour meeting with Ajit at Vidhan Bhavan in South Mumbai. Ajit apparently told them it was better to ally with the BJP than to be part of a three-party government under a chief minister like Uddhav, who had no legislative experience. He also said that the NCP could get 21 ministries if it allied with the BJP, but would get only 14 in the three-party government.

The continued efforts to win over Ajit indicated that the NCP was worried that party MLAs could side with him at the time of the secret ballot to elect the speaker of the house. And, if Fadnavis and Ajit managed to get their speaker in place, it was almost certain that they would win the trust vote.

The NCP had elected Ajit as the party’s legislature leader on October 30, but replaced him with Jayant Patil on November 25. The NCP sent a letter in this regard to the legislature secretariat, which meant that Ajit could no longer issue a whip. Ajit and the BJP said he had the right to do so as he was the legislature party leader at the time of swearing-in. Pawar, however, said he had consulted experts who told him Ajit had no such power.

On Monday evening, the Shiv Sena, the Congress, the NCP and their smaller allies gathered their 162 legislators at the Grand Hyatt and paraded them before the media. Pawar assured the legislators that Maharashtra was not Goa or Karnataka, and there was no need for them to worry about Ajit’s whip. “I take your responsibility, we will form our government,” he said.

Uddhav told the gathering that the alliance would endure longer than five years. “We are making a new beginning for the betterment of Maharashtra,” he said. “We believe in satyameva jayate and not sattameva jayate (Truth alone triumphs, not power).” All legislators then took oaths that they would follow the Constitution and would remain loyal to their parties.

As all this was happening, Ajit had, surprisingly, not taken charge as deputy chief minister. Fadnavis had taken charge on Monday morning, but Ajit had stayed away as he was busy in meetings. It was perhaps a sign that he was no longer confident of his decision to ally with the BJP.

On Tuesday morning, as the Supreme Court ordered that a floor test be conducted within 24 hours, Ajit was meeting Supriya Sule’s husband, Sadanand, at Hotel Trident in Bandra Kurla Complex. The meeting took place after Pawar’s wife, Pratibha tai, who is otherwise reclusive, took the initiative. Ajit respects her immensely, and she is said to be the real bond between the Pawar family members. There was immense emotional pressure on Ajit to return.

In many ways, the Supreme Court also paved the way for the same. It made clear that the floor test would not be a secret ballot, would be conducted by a pro tem speaker and would be telecast live. This foiled the BJP’s and Ajit’s plan to have their speaker candidate elected via secret ballot. The odds were against them.

At around 2pm, on November 26, Ajit met Fadnavis and told him that he wished to resign, due to “personal” reasons. Fadnavis accepted and followed suit. At a news conference at 3.30pm, Fadnavis announced: “We will continue to serve Maharashtra as a sincere and dedicated opposition.”

In the evening, MLAs of the Shiv Sena, the NCP and the Congress chose Uddhav as the alliance leader. Uddhav will be sworn in on November 28 at Shivaji Park. Jayant Patil is likely to be his deputy, and the Congress will get the speaker’s post. 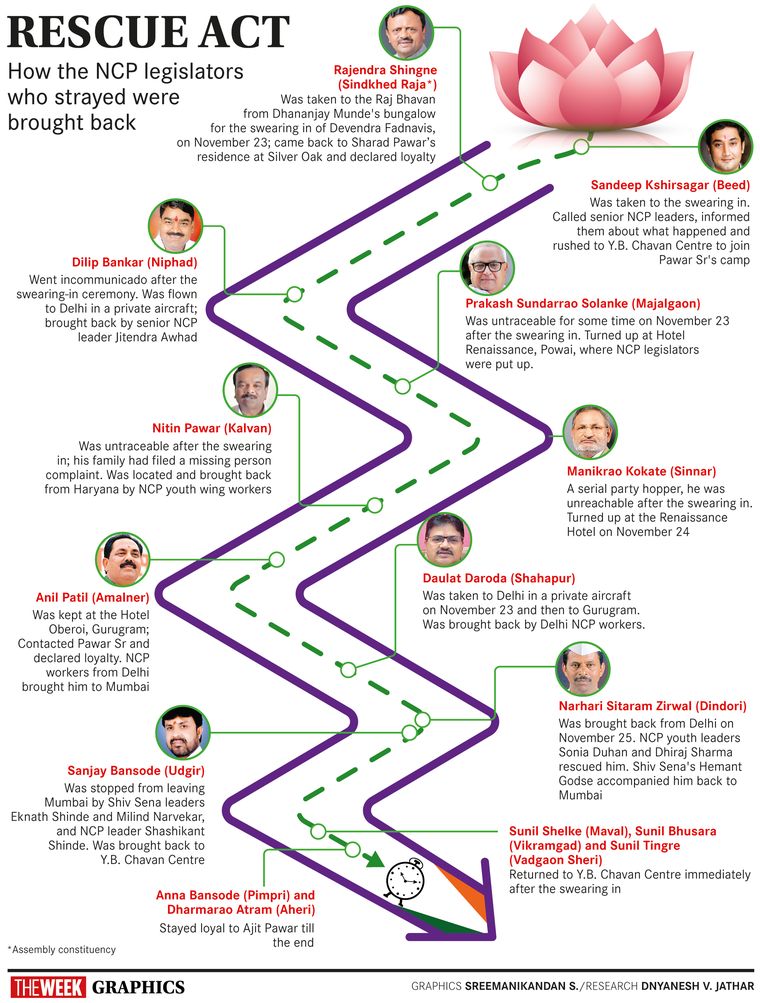