'Independence of Balochistan will benefit India in the long run'

“India is not doing any preparation to face evolving international order” 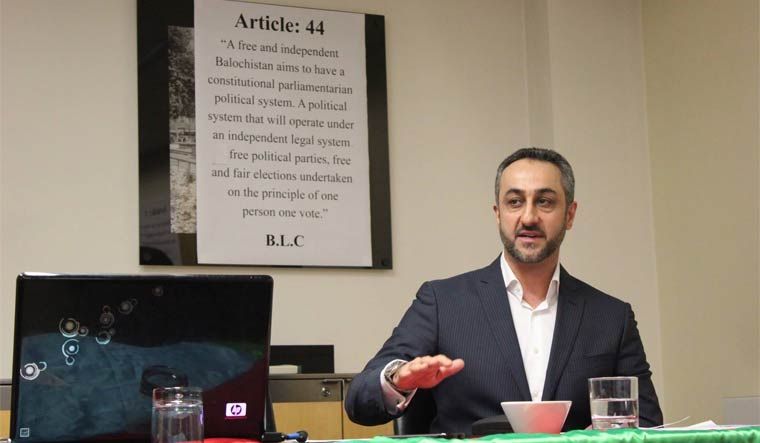 Hyrbyair Marri, founder of the Free Balochistan Movement, was the youngest and first Baloch minister to decline to pledge loyalty to Pakistan. Instead of the words “I shall remain loyal to Pakistan”, he vowed “I shall remain loyal to my Nation”. In 1997, he had taken part in the Balochistan provincial elections, winning an overwhelming majority of votes to become the minister of road and communications in the Balochistan state government. Marri was also the first Baloch minister to protest against conducting nuclear tests in his state in May 1998.

Born on August 4, 1968 in Balochistan, Marri is the fifth son of veteran Baloch national leader Nawab Khair Bakhsh Marri. After completing his primary education in Quetta Grammar School and higher education in Kabul in Afghanistan and in Russia, where he studied journalism, he moved to Kabul along with his father and other family members. During this period, he paid several visits to Helmand where Baloch refugees fleeing Pakistan’s repression had sought shelter. Marri returned to Balochistan in the early 90s where he served as a minister. But a turning point came in his life in 1999 when Musharraf came to power through a military coup and dismissed the government of Nawaz Sharif and all other provincial governments. Marri travelled to Europe and sought exile in the UK.

In early 2000, Balochistan High Court Judge Mir Nawaz Marri was killed by unknown assailants, but the Musharraf government arrested Nawab Khair Bakhsh Marri, along with hundreds of other Marri tribesmen. Hyrbyair Marri and his brothers were also implicated in the murder case. During his stay overseas, Marri continued to play a key role in the cause for Balochistan's independence. On December 4, 2007, he was arrested at the behest of the military government of Musharraf and put in Britain’s high-security Belmarsh prison. He is the first Baloch leader, along with Faiz Baluch, to be imprisoned abroad for the Baloch cause.

In February 2008, he and Faiz Baluch were acquitted of terrorism charges by a British jury. He remains steadfast in his demand for an independent Balochistan. In 2014, he launched a political road map, Balochistan Liberation Charter, which outlined what kind of Balochistan they need. In 2016, along with his followers, he founded Free Balochistan Movement, a political party which strives for a united and democratic Balochistan.

Excerpts from an exclusive Interview

Why do you think the Baloch movement has not been able to garner international support?

There are multiple reasons for Baloch movement not getting support from other states. In democracies, particularly in Western democracies, the elites tend to find short-term solutions for long-term problems. There were leaders in the West, who were visionaries and strategic thinkers, who made policies which influenced the world for centuries. Today, the West lacks leadership as we have seen in the case of Afghan conflict, where the Western powers lacked the courage to call Pakistan a terrorist state despite the deaths of at least 3,000 American soldiers. Over one hundred thousand innocent Afghan lives were also lost at the hands of Pakistani sponsored terrorists.

However, in the long run, the West will address the Baloch issue because of Balochistan’s strategic geopolitical location, Chinese interest and involvement through CPEC (China–Pakistan Economic Corridor) and Pakistan being a nuisance in the region.

When it comes to Balochistan’s occupation, the world did not react or intervene because they thought it was just a problem of the Baloch people and it would not affect their lives in any shape or form. But that emboldened Pakistan to ignore international laws.

The so-called civilised world could not envision the long-term consequences of this occupation by Pakistan. What followed was the interference in Indian territory of Kashmir, Bangladesh genocide and Pakistan’s wicked adventures in Afghanistan which continues to this day.

As nobody was saying anything when Pakistan disregarded international laws, they came to their own conclusion that the West is deeply depended on them, so they are 'untouchable'. Now, we see the end result. Pakistan is harbouring thousands of religious terrorists which are attacking and harming Western interests.

Those movements which gained international support have succeeded because of nation-state backings. Iran is supporting Houthis, all Arab and Muslim states have been financing and supporting Palestine. Kashmir issue has been internationalised by Pakistan’s financial and diplomatic support and now Turkey is also supporting Pakistan’s narrative because Erdogan is an Islamist. Balochistan’s liberation struggle is a democratic and secular movement and, as I said, there are some short-term drawbacks in democracies. When it serves their need, they support liberation movement, and it will also serve the needs of Baloch. So, it would be a mutually beneficial alliance, not a one-sided one.

Do you believe that armed struggle is the only way of attaining freedom of Balochistan?

There are many ways of achieving freedom. Armed struggles cannot achieve freedom on their own if the other components such as strong political parties and diplomacy are not there. National liberation struggles are multi-dimensional struggles. In undemocratic regions, armed struggle has been a necessary component for achieving democracy and freedom. The question is why people are compelled to choose armed struggle. Ideally, the only humane method of resolving political conflicts is the implementation of international laws, and if there is real democracy in a state, there are good possibilities of peaceful resolution based on negotiations. If the United Nations had played its role in 1948, when Balochistan was illegally and forcibly occupied, we would have been living in a peaceful independent state. International laws were ignored in 1948, and a free pass was given to UN’s member state Pakistan

The Baloch armed struggle started a few months after the illegal annexation of Balochistan. It was initiated not to attack Pakistan but to defend Balochistan’s territory, which Pakistan forcibly occupied, and that’s why the struggle is legal, just and necessary. Any free, brave and self-respecting nation would have done the same what the Baloch did in 1948.

Most of the people with an understanding of the Balochistan’s history will agree that the current armed struggle cannot be separated and isolated as a different phase of history. It is seen as the continuation of the armed struggle which was initiated by Agha Abdul Karim in 1948 against Balochistan’s illegal annexation and invasion by a neighbouring country. However, I strongly believe that armed struggle, as self-defence, alone cannot liberate Balochistan if other components of national liberation movements are ignored.

Do you think it was right on the part of the US to have declared BLA as a terror outfit? And how has it affected the movement?

Shortly after the US decision, I expressed my views in a tweet that “Taliban, the brainchild of Pakistan, has been complicit in bringing the Twin Towers down and now the U.S. has unfortunately bent its knees to appease Pakistan and Taliban by banning the Baloch organisation. The Trump administration should rethink their decision.”

We must remember that previously, during Musharraf's dictatorship, the US had rejected Pakistan’s requests to proscribe Baloch armed organisations. I believe President Trump’s policy of appeasement is a very dangerous move for the US as well as for international peace. As he now is trying to appease Erdogan by allowing him to continue Turkey’s offensives against the Kurds, he left Afghans in the midway at the mercy of Pakistan. The Chamberlain method of dealing with international affairs will only strengthen the authoritarian and Islamist bloc.
Americans and Europeans who regard self-defence as terrorism tend to forget their own history and policies. When Nazis occupied Europe, the occupied nations did not protest the occupation with placards but took arms in their self-defence. Recently, we have witnessed similar endeavours in the Middle East after the Arab spring when Europeans and Americans armed and supported opposition groups against tyrannical regimes. We have also seen democrat Kurds defending their people against ISIS fanatic forces.

When an occupying force uses violence to dehumanise the occupied nation, uses state institutions to disappear the dissidents, bombs villages and capture women, in such scenarios self-defence by the colonised nation is justified. Baloch nation is facing the cruelty and occupation which European nations faced during Nazi and Soviet occupations. The right to self-defence of Europeans against such cruelty is regarded as a just form of struggle and celebrated all around the West. Now Baloch and Kurds are facing the same cruelty and conditions, and have no other options but to defend their livelihood. But now the Europeans and Americans question our people's right to self-defence which their forefathers exercised when they faced with similar conditions.

Western countries view the problems of the Middle East and Balochistan through euro-centric spectacles. In Europe, nations which demand freedom do not face ethnic cleansing; they can run newspapers and form political parties. One of the best examples could be the Scottish National Party, which has been in the government in Scotland for over a decade now, and their struggle, if successful, will literally dissolve the United Kingdom. I haven’t seen any member of the SNP being disappeared by the British intelligence agencies and then tortured, killed and dumped on the outskirts of Edinburgh or Glasgow.

Also, I would like to emphasise that two wrong don’t make a right. Pakistanis with the backing of Communist imperialist China have been violating international law in Balochistan, but it cannot justify actions of some rogue element within the Baloch struggle to start attacking foreign embassies. What Pakistan does in Balochistan amounts to ethnic cleansing and genocide, which is against all international norms and laws. Unfortunately, the attack on Chinese consulate in Karachi also clearly violated established international laws, and such actions by Baloch armed group are not justifiable. These actions were used by Americans as a pretext to ban a Baloch resistance organisation. The Baloch nation must understand that disregarding international laws and established laws of warfare will only weaken our case and would not help us achieve national liberation.

You have often asked India to come out openly in support of the Baloch Movement. Can you elaborate upon the exact support you expect from India?

The requirements of national liberations are not secret knowledge. I believe India should support Baloch people in every way which is needed for the liberation of a nation. An independent Balochistan would not only benefit the Baloch nation, but it would also be a geopolitical investment by India in the region. Balochistan’s energy resources are vast and India’s emerging economy needs enormous energy resources to compete with China and other countries. China is militarising Balochistan’s coastal belt to have a better stranglehold on India. Post-independent Balochistan will not be a launching pad for aggression against any state, but it will do its bit in bringing peace and harmony to the region and strive for conflict resolution.

India relies on the West and other countries, but they forget that it is much safer and effective to have real allies next door. No one knows what will happen in the next two decades. China is rising and has built military islands in the South China Sea. The Middle East is changing; new bases and military installations are being built by Pakistan and China in Balochistan. But I do not see any preparation by India which is very worrying given the nature of evolving international order.
The independence of Balochistan will benefit India in the long run against its adversaries in the region. If Balochistan does not achieve freedom, it will be very difficult for India, in the long run, to protect its national interest in the region. Hence, Balochistan’s independence will determine not only Baloch nation's future, but also the future of India.