There is an economic urgency in India 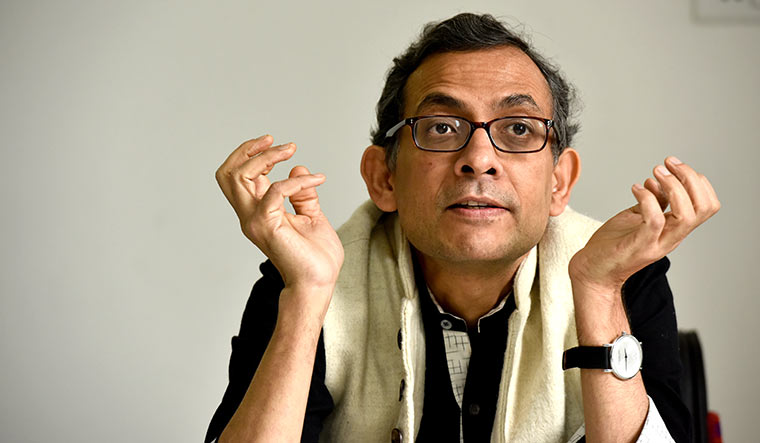 Abhijit Banerjee was fast asleep at his Boston residence when a colleague called to tell him that he was the newest Nobel laureate for economics. Banerjee acknowledged the news and went back to bed, but was soon flooded with calls—friends, colleagues, teachers, students and well-wishers. A few hours later, he attended a grand reception by the faculty and students on the Massachusetts Institute of Technology campus, where he is the Ford Foundation International Professor of Economics. Later in the evening, Banerjee, 58, spoke to THE WEEK in detail about his work, how India has fared in alleviating poverty and the current state of the Indian economy. Excerpts from an exclusive interview:

Q/ Kolkata is overjoyed. Presidency College has got the second Nobel laureate in economics.

A/ Well, it is special to me, no doubt. But not because I was a student of Presidency. It was special because I was part of a movement which did research on issues concerning people and their lives. Apart from that, everyone who got this award is from some place. So I am not very much overwhelmed that I belonged to Presidency College or certain institutes.

Q/ Many economists in India felt that it was just a matter of time.

A/ Let me tell you, there are many who also deserved it. Not all get it. But I got it. So one should be grateful. I accept this honour with absolute humility.

Q/ The Nobel committee said that you and your colleagues had changed the perception about poverty and development economics.

A/ Actually we saw closely the issues that we dealt with. Economists across the world have the tendency to see things from a distance. On the contrary, we saw poverty and other related issues like behavioural changes of human lives very closely. Many people did not take those issues seriously. But we defied that attitude and tried to understand poor people’s wrong behaviour. But, at last, the work got recognition, which made all of us happy.

Q/ What did you try to see closely?

A/ We tried to understand the behaviour of every section of the society. Poor people have a systematic pattern. It varies at the same time from section to section. If we follow the pattern closely, the overall development policy will benefit.

A/ For many years we evaluated a programme and built up a system to understand whether the problem lies in education or in other areas. We tried to identify the faulty behaviour of the poor and addressed those issues segment-wise. It can be very useful for policy formulation by the government.

Q/ It was rigorous experimentation which lasted decades. Must have been strenuous and tough.

A/ Why do you call it tough? It was a challenge, however.

Q/ You took data from different subcontinents and assimilated them to reach a conclusion.

A/ We did many experiments in India and other places. Of course, it was a rigorous experiment with a large number of samples. But then that is the job of researchers.

Q/ How has India done in alleviating poverty?

A/ I will not call India a failed state so far as poverty alleviation is concerned. If we compare, India has done better than some countries, but is lagging behind many others. India could have done more than what it did.

Q/ So you feel there is a lot of room for improvement.

A/ True. But I must also say at the same time that it could have gone worse. That did not happen. India has maintained a systematic improvement in poverty alleviation, but not at a very fast pace.

Q/ Successive Indian governments saw poverty alleviation through the prism of monetary allocations. Do you think it is the right approach?

A/ I am very much against it. Allocation should not be the yardstick for poverty alleviation. You need to have a human approach in your policy to eradicate it.

Q/ Could you explain that further?

Q/ Where do you see economic growth in it? India’s growth rate has plummeted and many critics believe it could slide further.

A/ Yes, growth is a serious problem in India. Growth has slowed down substantially and urgent measures are needed. The government needs money to spend.

Q/ Sometime ago you gave a prescription for growth and at the end you said, ‘Pray’.

A/ Well, I joked. Do not take that seriously. My prescription even today would be to not tighten the belt. Do not come up with a tough fiscal policy and pretend that the situation needs tough fiscal and monetary policies. It will be dangerous for the country.

Q/ You want the government to spend?

A/ Yes, for different sections of people. The government should not forget that those people need money to survive. For the economic growth that is very important.

Q/ But, if we take your formulae into consideration that different people need different types of support, it may work in theory. But is it practical for the government?

A/ I agree that not everything can be done by the government on what we prescribe through our formulae. But we must understand that a Class II student should not be taught Class V (syllabus). The government has to measure it correctly and utilise resources accordingly. It has to take everything into consideration before formulating policy.

Q/ You feel that if the government wants to follow the model it can do it?

A/ It is not easy, but it can be implemented. We have pointed that out through our research.

Q/ You have watched the Chinese economy closely. How do you see China’s growth model?

A/ China went through the classic free market economy. However, it has undertaken labour intensive growth. Because of that wages went up and poverty reduced.

Q/ Can it be done in India?

A/ Frankly, we were not able to do that. Bangladesh and Vietnam did that and moved ahead.

Q/ Is it because of labour reforms?

A/ Yes, partly. But we delayed it. It is not that we did not attempt. But we were very late. When we started other nations such as Bangladesh and Vietnam moved far ahead of us.

Q/ What would be your advice to the government of India?

A/ Strictly speaking, there is an economic urgency in the country which the government has to address immediately. Do not waste time; things can turn worse.

Q/ What would those measures be?

A/ Give money to the poor. Increase public spending. Induce growth. You have to see that not even a small biscuit factory is shutting down. If it does, there would be job loss. People would not have access to food. Market will collapse and poverty would increase manifold. India has to act immediately.

Q/ Did you advise Rahul Gandhi and the Congress on NYAY (Nyuntam Aay Yojana, a minimum income guarantee scheme) before the Lok Sabha elections?

A/ I did not advise them, but I gave them information to implement the programme. They sought help from me.

Q/ Your suggestion was to tax the rich heavily to fund the project.

A/ Yes, that is what I believe in. We have serious lapses in taxing the rich. I always favoured such policy thrusts. In fact, the current Indian government started taxing the rich. But later it backtracked because of pressure.

Q/ Many years ago, as a student of Jawaharlal Nehru University, you were arrested and put in Tihar jail.

A/ Yes, true. So far as I remember that was in 1982 and I was arrested for taking the side of a classmate.

Q/ Did you always have a voice of dissent?

A/ No, I never fought for the sake of fighting. I always stood for the truth. If there is any injustice, I spoke about it or I protested. In India, I think people should collectively do that. Should you not as well? What do you feel? You should not remain silent seeing injustice. In 1982, the same situation was there for me and I protested. As a result of that I was arrested. I do not regret it.

Q/ Were you influenced by Amartya Sen, as many have started comparing your work with his?

A/ Well, he is an icon in development economics. He has influenced everyone in that way. However, in my study he never intervened or asked me to do that or not to do that. He has no direct influence on my study. But, being a student, he used to ask us to fight against poverty all the time being an economist. So, practically, economics became very much connected to issues concerning poor people for us because of his approach.