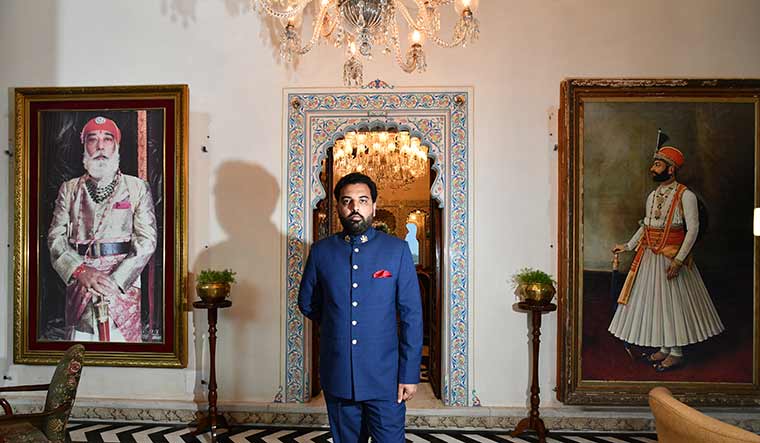 There is a scene in Freedom at Midnight, by Dominique Lapierre and Larry Collins, in which the Maharaja of Gwalior got an electric train set laid out over 250 feet of solid silver rails placed on the palace banquet hall. As the guests sat around the table the maharaja controlled the train from a panel by his chair. He could pass the vegetables or the meat dishes to his guests on the train. He could also, by pressing a switch, deprive a guest of dessert by making the train shoot past him.

As I sat in the office of Prince Lakshyaraj Singh Mewar, 34, in the City Palace, Udaipur, I heard a whistling sound overhead. I looked up to see a railway track, and a toy train merrily chugged past. It reminded me of the Maharaja of Gwalior. (Thankfully, there was no dessert on offer.) What is with Indian royalty and toy vehicles, I wondered. Lakshyaraj is an avid collector; he has got 1,200 toy cars affixed to the ceiling outside his office. “This is luxury to me,” he says. “To be able to keep all the fun things of my childhood alive. You don’t have to act mature and say that you have a Rolls Royce or a Mercedes.”

In many ways, he does not like to be called a prince. “Everyone’s privileged to be born where they are,” he says. “Nobody gave a request letter to be born somewhere.” Lakshyaraj, the only son of Maharaja Arvind Singh Mewar and Vijayraj Kumari Mewar of Udaipur, is most animated when he speaks about his work. He attended the Blue Mountains International Hotel Management School in Australia before returning, and later taking over as the executive director of the Historic Resort Hotels (HRH), India’s only chain of heritage palace-hotels and resorts under private ownership. Headquartered in Udaipur, the chain comprises 11 hotels, including the Jagmandir Island Palace, the Fateh Prakash Palace and the Shiv Niwas Palace. Last year, Lakshyaraj was conferred the Young Hotelier of the Year award by the Federation of Hotel and Restaurant Associations of India (FHRAI).

“My grandfather (Maharana Bhagwat Singh Mewar) was the one who directed the operations when we opened up the Lake Palace in the early 1960s,” says Lakshyaraj. “And then my father expanded the concept of hotels and heritage. Today, I handle the day-to-day operations of the hotels. I focus on how we can integrate modernity with heritage. As my grandfather would say, the Lake Palace or the Jagmandir Palace was built before America was discovered.”

One of his most enduring memories is when he went to Singapore for a conference. At the airport, he saw a picture of the Lake Palace in a book. When he clicked a photo of it, the shopkeeper told him: “Oh, that’s another click”. What do you mean? asked Lakshyaraj. He said that the Lake Palace was the most photographed monument after the Taj Mahal. “I had to go away from home to learn a fascinating fact about a hotel that my father owns,” says Lakshyaraj. “I found it tickling and humbling at the same time.”

In fact, there is much that seems to tickle Lakshyaraj. Although there is a sombre air about him, a lot of what he says is playful. “I still play hide-and-seek with my friends in the palace,” he told me with a smile. When we ask him whether we can click him in a boat on the lake, he says sure. “I can do cartwheels for you if you want,” he says. As dusk approaches and Hindustani music starts wafting over the palace courtyard, Lakshyaraj changes into a navy blue bandhgala suit. Framed against the palace in the dappled light of a fast-fading sun, he looks every bit the prince he claims not to be.