“For me, research is travelling” 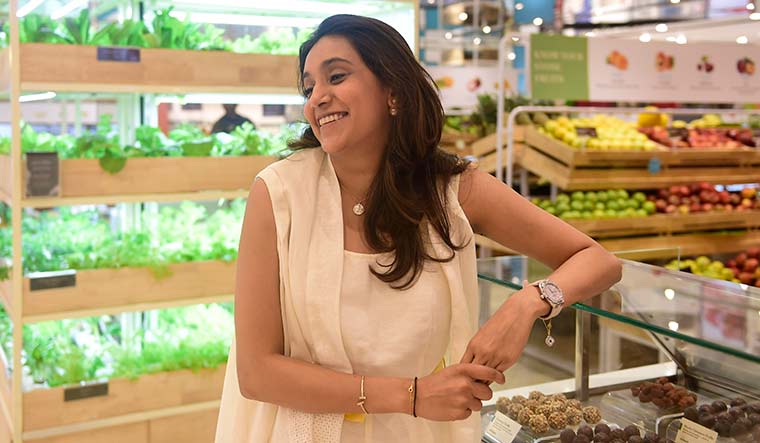 Currently, the 21-day wellness challenge is going on at the 25,000 sq.ft. outlet of Foodhall, a premium lifestyle food superstore, in Bandra, Mumbai. There is a wellness board to inspire you daily on what you can have. “Every month, we choose a theme,” says Deepesh Panicker, assistant store manager. “We chose 21 days this time because three weeks is roughly the amount of time you need to change your mindset about something.” There are recipes you can follow to make everything from garlic tofu to chocolate avocado pudding. Foodhall is not just about shopping but about experiences, says Avni Biyani, 29, its concept head and the younger daughter of Kishore Biyani, founder and CEO of Future Group. “We have realised we can’t purely be a retail player,” she says. “[In future], more and more experiences will have to come in. There will be a lot more engagement with the five senses. We will have to build a deeper relationship with each customer.”

Foodhall, the most premium offering from the portfolio of the Future Group, was started in 2011 and now there are nine Foodhall stores across the country. Avni joined Foodhall after she finished studying sociology and politics at New York University. She says she developed an interest in food when she took a few classes on food and society in college. “They helped me think of food in a more nuanced and empirical manner,” she says. “Which, in turn, helped me bring a new perspective to how Foodhall should be.”

Avni, who loves Japanese and Middle Eastern cuisine and is a fan of restaurateurs Layo and Zoe Paskin (of The Palomar and The Barbary in London), says that whenever she runs out of ideas she travels. “For me, research is travelling,” she says. She just returned from a trip to Japan to study its fruit culture, which, she says, is one of the best in the world. According to her, Foodhall has been unaffected by the market slump. “We have entered the gifting season and are getting a decent [number of orders] from corporates,” she says. “It was something we were worried about, since many of our clients are from the real estate, jewellery or automobiles sectors and are facing some kind of stress.” She says with one more store opening in Delhi soon, their revenue should be touching Rs450 crore next year; currently, it is Rs300 crore.

Clearly, she has inherited her father’s business acumen. The Future Group’s portfolio of brands in food, FMCG and fashion is impressive. There are over 2,000 Future Group retail stores across the country. It has not, however, always been smooth sailing for the group’s founder, who started the company with a Pantaloons store in 1992. Kishore was badly affected by the economic downturn of 2008. Burdened with heavy debt, he had to sell Pantaloons to the Aditya Birla group and focus on the group’s flagship retail brand, Big Bazaar. When I ask Avni about it, she is reluctant to elaborate. “Everyone has ups and downs in life,” she says. “I don’t know anyone who has not.”