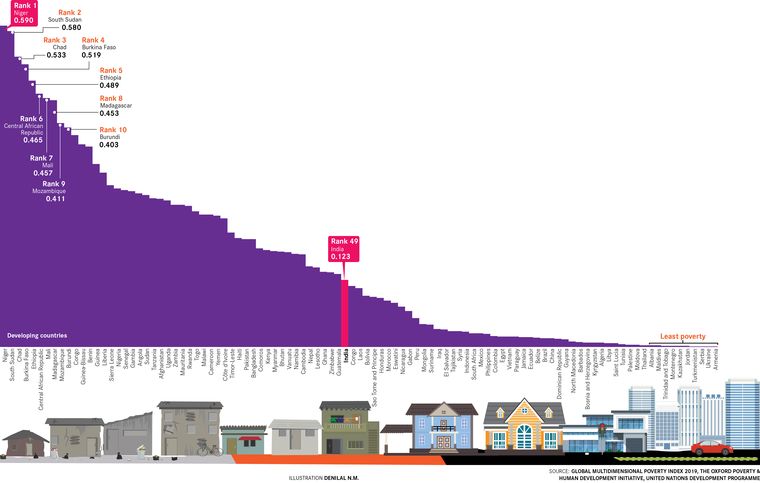 In the decade between 2005 and 2016, India lifted 27 crore people out of extreme poverty—more than the combined population of Congo, Uganda, Iraq, Venezuela, Australia and Italy. India more than doubled its per capita GDP, too, moving up from being a poor country to a middle-income one. An average Indian now earns slightly more than Rs10,500 a month, up from around Rs4,000 in 2005.

The numbers are flattering, but deceiving. More than 36 crore Indians still cannot afford three square meals a day, which is why the World Bank continues to bracket India with Nicaragua, Honduras, Kenya and Kiribati. On an average, even people in war-torn Libya and sanctions-plagued Cuba continue to earn more than Indians.

There is another worry line for India. The Oxford Poverty & Human Development Initiative, which annually publishes the most authoritative index of poverty across the world, has found that the poorest among India’s poor did not increase their income as much as the other sections did. It means that the gap between the poor and the rich is widening fast.

Is the Indian government worried? Apparently not. The last time the government appointed an expert committee to estimate poverty in India was seven years ago. The committee, headed by former Reserve Bank of India governor C. Rangarajan, submitted its report soon after Narendra Modi became prime minister. The report has neither been rejected nor been released. Which means India-watching economists still base their research largely on data that date back to 2012.

Also, every five years, the National Sample Survey Office is supposed to publish a survey on how Indians spend their money, giving crucial pointers to the prevalence of poverty in India. The latest survey was to be published early this year, but it has not been released. It earned Modi a dubious distinction: He became the first prime minister in independent India to go to the polls without showing how his government had fared on the poverty eradication front.

Statistics alone do not matter, of course; they have to offer insights as well. In 2009, the Kolkata-based Indian Statistical Institute started a pilot project to assess poverty across India’s 575 districts. It found that Murshidabad, once the opulent capital of the Nawabs of Bengal, was India’s poorest district, and that 107 districts accounted for half of India’s rural poor. “And, if you draw a straight line (on India’s map) from Kanpur in the north to Kanyakumari in the south, you would see that rural poverty is very high in the area to the right of the line, or the east of India,” said Buddhadev Ghosh, the ISI’s lead scientist for the project.

Ten years since, there has not been a follow-up project of comparable scale. Neither is there comprehensive data on how the 107 poorest districts in India have fared in the past decade.

What we do know is that things have gone from bad to worse in Murshidabad. It is now one of three districts in eastern India that have become the den of child traffickers.