The next target is Venus 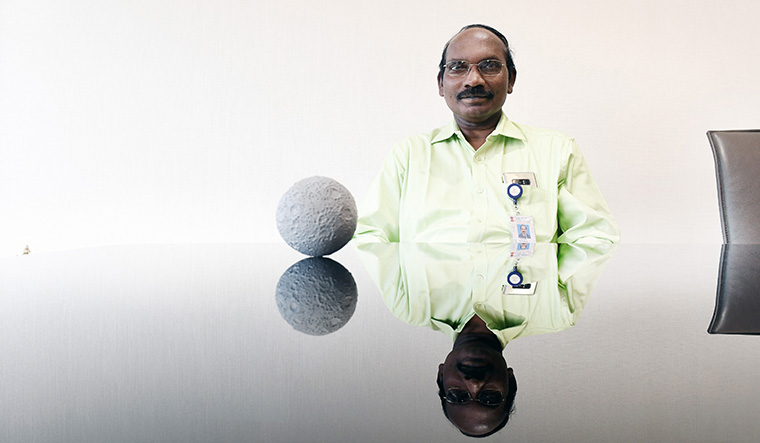 There is a wall of shelves in K. Sivan’s office, stacked with polished gleaming models of rockets and satellites the Indian Space Research Organisation has launched. With the number of launches having increased in recent years, the shelves are only able to display the most recent ones. If the shelves are indicators of ISRO’s growth, two wall paintings are a reminder of its humble beginnings. One shows a rocket being transported by bullock cart, another is the iconic image of a rocket being taken on a bicycle.

The chairman is no different. He is a son of the soil who rose to be known as Rocket Man, because of his work with the cryogenic engine technology. Ahead of the launch of Chandrayaan-2, Sivan spoke to THE WEEK about exciting days ahead. Excerpts:

Q/ ISRO missions are getting very ambitious, and the world is watching. Does the fear of failing worry you?

A/ I began my tenure with a failure (a GSLV Mk-II launch in March 2018, when ISRO lost contact with its satellite, the GSAT-6A). Our failure rates are very low because we have well-defined systems. Our system hinges on teamwork and an excellent review mechanism. We work with passion here.

The design margin for space systems is so low that the difference between success and failure is only a hairline. In rocket systems, there are known knowns, known unknowns and unknown unknowns. In some places, we know there will be uncertainty, so we build in extra margin. In some places, it is difficult to identify whether there can be error. This holds true for all space agencies. Recently, Russia had a failed launch and the cosmonauts made an emergency exit. There is always some unlucky time.

Q/ You say unlucky. Is there luck in rocket science?

A/ No, we do not talk about luck in rocket science. Those are engineering systems. Luck is a personal thing. I definitely believe in luck, but we do not incorporate the luck factor into our systems.

Q/ How did you recreate the moon’s landscape for testing Chandrayaan-2?

A/ This facility in Chitradurga simulates the conditions of the site where the probe will land. We made the two craters, complete with the gravitational pull the lander will experience. We even created a soil, using existing knowledge about the moon.

Q/ Which are the new technologies that have been developed for Chandrayaan-2?

A/ It is too early to tell. The spin-offs of the new technologies come only much later.

A/ They were the right persons for the job. At ISRO, we do not consider gender when selecting a person. The gender ratio, in both the scientific and administrative sections, is 4:1, and women have occupied high positions. One of our senior-most women colleagues was Geeta Varadan, who retired as director of National Remote Sensing Centre. Anuradha T.K. and P. Valarmathi were satellite project directors.

Q/ Could a woman chair ISRO one day?

Q/ When not a rocket scientist, what are you?

A/ I like listening to old Tamil film songs and gardening. When I am in my garden, I forget I am a rocket scientist. There, I am completely connected with the earth.

Q/ That is reminiscent of The Martian, where the astronaut grew potatoes on Mars. Could humans do that someday?

A/ Why not? Our understanding of planetary systems is improving. In some decades, humans could make Mars a very different planet.

Q/ What is the progress with Gaganyaan?

A/ The system concept reviews are over, the engineering system (orbiter and service module) is finalised. They will shortly go for manufacturing. After that, the flight system will be realised and we will fly.

We have submitted a requirement document to the Indian Air Force for crew selection and training. The Defence Research and Development Organisation will tie up for life systems.

The academia is preparing experiment proposals for the three flights. In addition, 550 private organisations from small startups to big industrial houses will be manufacturing the components.

Q/ What is the next deep space mission for ISRO?

A/ The next target is Venus. We made an announcement of opportunity for the payload and got a lot of proposals. The challenges of Venus will be different. It has a harsh thermal environment, severe atmospheric conditions and is more hostile than Mars. However, Mission Venus is not an approved project yet.

Q/ Has India’s space vision changed from societal benefits to explorations to now space as a military frontier?

A/ Societal programmes remain top priority. We recently developed NavIC messenger, a gadget based on the NavIC navigation system, which is already being used by fishermen. Going into deep space exploration was the next logical step for us.

Q/ What is the progress with air breathing technology for rockets?

A/ Air breathing uses atmospheric oxygen for burning fuel, and reduces on-board oxygen. In 2016, we demonstrated a successful supersonic compression, or scramjet. Air breathing can only be done in the atmospheric stage of a rocket’s flight, where there is oxygen. But the atmosphere also has a drag, which works against propulsion. Our next demonstration will show that the thrust of the air breathing rocket is more than the drag. This experiment is in the preliminary stages.

Q/ There is a new space race now between China and India.

A/We are not racing. We are actually trying to establish a collaboration with China.