It must have been a hard-landing, says ISRO Chairman K. Sivan 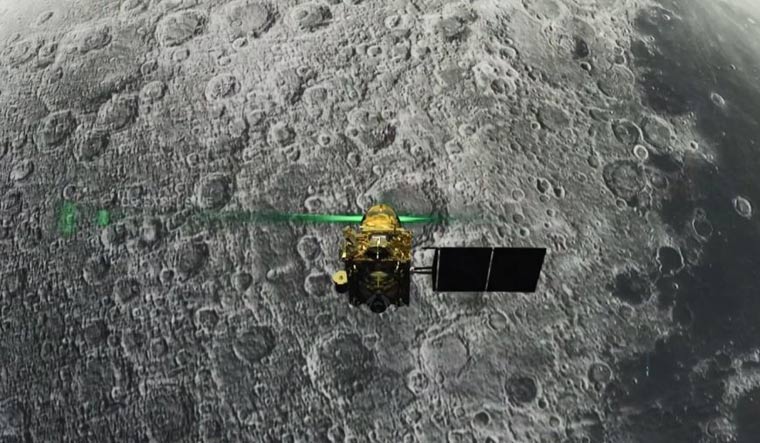 The Chandrayaan-2's Vikram module has been located on the lunar surface and it must have been a hard-landing, ISRO Chairman K. Sivan said on Sunday, in an admission that the planned soft-landing was not successful.

"Yes, we have located the lander on the lunar surface. It must have been a hard-landing", Sivan said.

The image of the lander rover 'Pragyan' is housed inside it was captured by on-board camera of Chandrayaan-2 orbiter, which is healthy, safe and functioning normally in the intended orbit around the Moon.

The orbiter camera is the highest resolution camera (0.3m) in any lunar mission so far and shall provide high resolution images which will be immensely useful to the global scientific community, the Bengaluru-headquartered space agency had said earlier.

India's bold mission to soft-land on the moon suffered a setback with the 'Vikram' module losing communication with ground stations, just 2.1 km from the lunar surface during its final descent in the early hours of Saturday.

Considered as the "most complex" stage of the country's second expedition to the moon, the lander was on a powered decent for a soft landing when it lost contact.

The data is being analysed, the ISRO had said soon after.

Asked if the lander was 'damaged" during the 'hard landing", Sivan said: "That we do not know".

'Damage can't be ruled out'

But some space experts said Vikram suffering damage in the hard-landing cannot be ruled out.

"When the system does not work well, it (the lander) will go and hit the Moon. There is no ambiguity in that", another veteran space expert said.

"Unless all the things are compensated...compensating gravity, it (the lander) will not come down smoothly and touch the surface. That's the critical part of the whole maneuver", he said.

Sivan had said on Saturday that the space agency would try to establish link with the lander for 14 days and reiterated on Sunday after it was located on the lunar surface by Chandrayaan-2's on-board cameras that those efforts would continue.

He had said that Vikram lander's descent was as planned and normal performance was observed up to an altitude of 2.1 km, but subsequently, communication from the lander to ground stations was lost.

A senior ISRO official said time was running out and possibility of re-establishing communication looks "less and less probable".

"Progressively...as time goes by...it's difficult (establish link)", the official said, but added that with the "right orientation" it can still generate power and recharge batteries with solar panels.

"But it looks less and less probable, progressively", the official said on condition of anonymity.

According to ISRO, 90 to 95 per cent of the Chandrayaan-2 mission objectives have been accomplished and it will continue contribute to lunar science, notwithstanding the loss of communication with the lander.

The space agency also said the precise launch and mission management has ensured a long life of almost seven years, instead of the planned one year for the orbiter.

Meanwhile, Sivan said Prime Minister Narendra Modis address and outpouring of support and kind words for ISRO after the Chandrayaan-2s Vikram unsuccessful bid to touchdown on Lunar surface have boosted the morale of its scientists and engineers.

"We are extremely happy (the PMs address as well as nation rallying behind ISRO). It has boosted the morale of our people", Sivan told PTI.

"We are so touched, former ISRO Chairman K Kasturirangan said.

"The country has given a good, positive response. PM was incredible yesterday", as he praised Modi for inspiring, encouraging and reassuring Sivan and ISRO team and fully backing them.

"The way he (PM) conveyed it...so passionate...so emotional and sometimes rich with meanings and positive responses. I think we could not have expected anything better. Fantastic", he said.

"We are definitely grateful to the nation and PM", said another former ISRO Chairman A S Kiran Kumar, who noted that there are hundreds and thousands of variations that were possible for the soft-landing mission, as he underlined the complexities of the mission.

"We appreciate that the country and people were able to actually take note of this and continue to give their support. So, its very positive. We are grateful to the entire country", he said.

The successful touch-down would have made India the fourth country after erstwhile USSR, the US and China to achieve a soft landing on the moon, also the first to launch a mission to the unexplored south pole of the Moon.

The orbiter payloads will conduct remote-sensing observations from a 100 km orbit.

Chandrayaan-2, a follow-on mission to the Chandrayaan-1 mission undertaken more than a decade ago, comprises an orbiter, lander (Vikram) and rover (Pragyan).

The orbiter carries eight scientific payloads for mapping the lunar surface and study the exosphere (outer atmosphere) of the Moon.

ISRO on September 2 successfully carried out the separation of lander Vikram (with rover Pragyan housed inside) from the Chandrayaan-2 orbiter.

The Vikram module, which was supposed to carry out various tests on the lunar soil, had completed the rough braking phase as planned and entered the phase of fine braking at an altitude of 2.1 km, when it lost communication.

ISRO officials said on Sunday that data available till the lander lost communication with the ground-stations was being analysed to find out what exactly went wrong, but declined to specify a time-line for completing the exercise.

'Vikram', named after Dr Vikram A Sarabhai, the father of the Indian space programme, was designed to execute a soft landing on the lunar surface and to function for one lunar day, which is equivalent to about 14 earth days.

The rover was to roll down from the lander explore the surrounding lunar terrain, a few hours after the planned soft-landing.