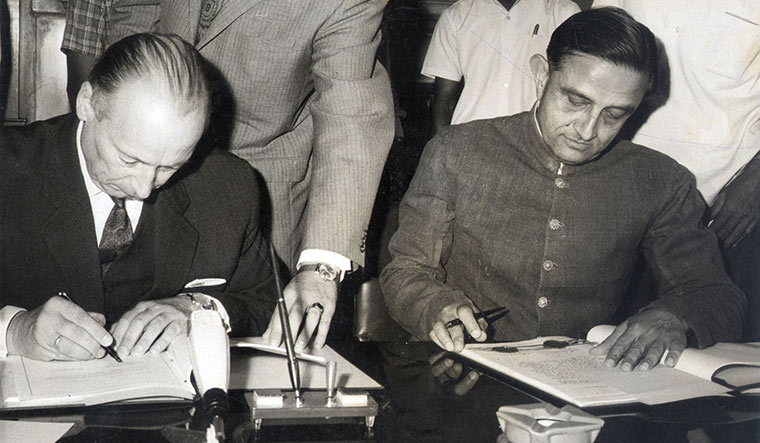 In 1966, a 21-year-old boy turned up at the Physical Research Laboratory (PRL), Ahmedabad, desperate to meet Dr Vikram Sarabhai. The boy, Padmanabh Joshi, had been part of a team from Nehru Foundation, set up by Sarabhai, that was carrying out a socioeconomic survey around Anand, Gujarat. Just as Sarabhai’s secretary was telling Joshi that he could not meet him without prior appointment, Sarabhai walked in. He enquired what was going on and invited Joshi into his room.

“When I told him that I was part of the team that conducted the survey, he was very happy and asked me minute details,” Joshi told THE WEEK, adding that he was in Sarabhai’s room for around 20 minutes. Sarabhai laughed when Joshi asked him how this survey was related to space technology.

“He told me that being chairman of Indian National Committee for Space Research (today, the Indian Space Research Organisation), he was seeing whether satellites can be used for rural education and training of farmers,” said Joshi. The word satellite was alien to Joshi. Sarabhai was quick to pick up the curious boy’s confusion. “He asked me what would happen if you hold a mirror up and project a torch towards it. I replied that the light would come down. In a second, I understood what a satellite is.” Such was the simplicity of the scientist-visionary-industrialist.

After being named chairman of the Atomic Energy Commission when Homi Bhabha died, Sarabhai had his base in Bombay, but continued to travel. He would visit Ahmedabad on weekends. Students pursuing PhD and MSc would line up outside his PRL office to show him their work. Sarabhai would take the overnight train to Bombay, rather than catch a flight. He would take a student or two along with him to check their work and they would then get down at Baroda. His students included the likes of Professor U.R. Rao and Dr P.D. Bhavsar. And the team he put together included Dr A.P.J. Abdul Kalam and Dr K. Kasturirangan.

“He had this ability to connect a problem with technology, bring things together to solve something and find the right quality in persons,” said Kartikeya Sarabhai, Vikram’s son and director of Centre for Environment Education (CEE). “Once he had Kalam work on the third stage of the rocket. Kalam asked how it would be possible because the first two were not there. Sarabhai told him that they would fly it off from a different place and it happened from France. He wanted someone to do what the person was best at doing.”

Sarabhai personally founded, or guided the setting up of, 38 institutes or organisations. These include IIM-Ahmedabad, ISRO, the fast breeder reactor at Kalpakkam and the Electronics Corporation of India Limited in Hyderabad.

According to economist Jaynarayan Vyas, Sarabhai was a scientist par excellence who had high regard for management capabilities. “He applied himself deeply to any subject he touched. Whatever he touched turned into domain that remained a centre of excellence,” he said. 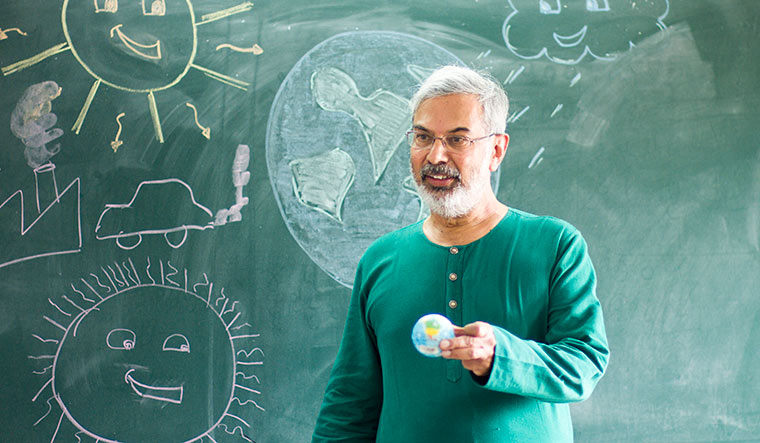 Sarabhai swore by research and development. “In Ahmedabad, when he thought that the textile industry was not doing the type of research that was required, he set up ATIRA (Ahmedabad Textile Industry’s Research Association),” said Kartikeya.

While a lot is known about Sarabhai as an educationist and scientist, not much is known about him as an industrialist. In the 1940s, the Sarabhais, a well-off family, ventured into the pharmaceuticals sector in Baroda. “He collaborated with the world’s best pharmaceutical companies like Squibb and Geigy. It was the largest pharma company in India for several decades,” said Kartikeya.

“He wanted to see India on the path of development. He spoke about leapfrogging [other nations]. He wanted India to develop but not imitate. He wanted [to make sure] that the same mistakes made during the Industrial Revolution would not be repeated,” he said. Sarabhai felt that some things are best done through industry, some through NGOs, some through institutions and some through governments.

After his appointment as chairman of Atomic Energy Commission, Sarabhai had to leave his business interests. The Sarabhai family’s businesses are now looked after by Mohal and Samvit, Kartikeya’s sons.

Born to liberal parents, Sarlaben and Ambalal, Sarabhai wanted every child to have the same educational opportunities that he got. So he set up the Community Science Centre in Ahmedabad, which was renamed after him posthumously. Dr B.S. Bhatia, director, says the institution seeks to popularise science among children. Bhatia, whose association with Sarabhai dates back to his ISRO days, said that Sarabhai started PRL because of his own interest in cosmic rays. He was witness to how Sarabhai visualised the space programme. “He would draw your thoughts from you, pull you into a discussion and think of the bigger picture,” he said.

Like Joshi, Bhatia too found Sarabhai to be a simple person. When Bhatia landed a job in ISRO, he had to meet Sarabhai. “A fresh IIM-Ahmedabad graduate, I went wearing suit and tie, briefcase in hand. I saw a person wearing kurta-pyjama. He got up and folded his hands. What do I do with it? I also folded my hands,” said Bhatia.

Maria Montessori, Mahatma Gandhi and Rabindranath Tagore had great influence on the the way Sarabhai was brought up, and their core values reflected in the way he did things. “If you needed help, he would come and sit with you but not help you. He would get you to do the work,” said Kartikeya.

Kartikeya said that he and his sister, Mallika Sarabhai, were Vikram Sarabhai’s biological children, but there were many students who were close to him. And, his vision has been passed on from his students to the next generation.