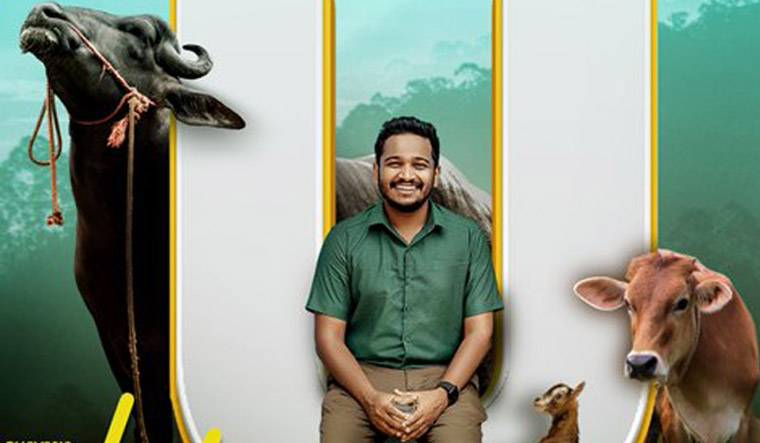 In the decades between 1930 and 1970, there was large-scale and organised migration of Syrian Christians from Central Travancore (today’s Kottayam district) to the Malabar region in search of fertile agricultural land. They fought wild animals and viral diseases in the hilly terrains; their sweat and resilience transformed Malabar’s hinterlands. Large tracts of uncultivated land got transformed into productive fields and estates. They brought to Kannur their unique culture, religious practices, superstitions and distinct dialect. Palthu Janwar is a film set in a rural community in the Iritty area of Kannur, dominated by the migrant Syrian Christian population.

The film is centred on the life of Prasoon (Basil Joseph), a failed entrepreneur in the animation business, who is forced to take up the job of a livestock inspector—which was offered to him as a compassionate appointment—in Iritty. His workplace would throw some challenges at him, and his inexperience would land him in major troubles. His small victories and big losses sum up the storyline.

Debut director Sangeeth P. Rajan builds a believable world based on a well-written script by Vinoy Thomas and Aneesh Anjali.

There is a conscious effort to capture the life and language of migrant Christians of Iritty. There is also an exploration of how religion plays a central part in their social life. The dialogues rightly capture the dialect of the migrant population. In recent times, there have been multiple films in Mollywood—Malaynkunju and Ila Veezha Poonchira among others—in which the topography of its locations played a major role in the narrative. In Palthu Janwar too, the geography of Iritty become part of the narrative. Ranadive delivers decent cinematography.

A major drawback of the film is its lead actor’s performance. Basil Joseph does not lift the film beyond a limit, though the supporting cast, especially Johny Antony and Shammy Thilakan, deliver stellar performances. In the combination scenes of Basil and Shammy, the latter scores with his screen presence and experience. Basil’s bland performance dips the film’s energy in many places, especially in the climax.

Veterinary care is not something that we often get to see in films. Palthu Janwar tries to give a genuine depiction of veterinary services, and the issues and pressure faced by those employed in the state veterinary services. It makes a sarcastic take on multi-level marketing, and the superstitions and the “magic tricks” peddled by those in religious robes. It also symbolically shows how religion was something of utility for the survival of the Syrian Christian migrants. There is also a depiction of how strong and brave the women of migrant families are. The script wraps all these little elements ingeniously in its narrative. There is also effective use of light humour.

The film intends to tell that animals also deserve human empathy. However, there are not many scenes to take the audience to that feeling. Also, the film fails to make the audience empathise with the emotional states of its lead character. This reviewer feels that a better performer in the lead role would have made a lot of difference.