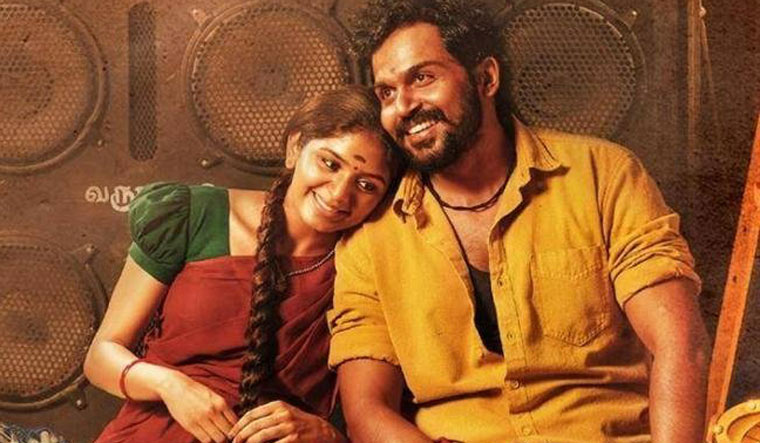 Viruman begins with a young boy angrily chasing his father, a tehsildar. The boy believes that his father is responsible for his mother’s death. His rage lands him in court, which asks his uncle to be the custodian of the boy.

As the boy grows up, his hatred towards his father also grows. He looks for opportunities to get even with his father. The movie revolves around this father-son duo of Viruman and Muthupandi, played by Karthi and Prakash Raj, while also giving flashbacks of the character of Viruman's mother, played by Saranya Ponvannan.

Viruman, directed by M. Muthaiah, is a predictable affair with hardly any plot twists; and if there are any, those are resolved in the next few scenes. The rustic setting reminds one of Karthi's earlier movies like Paruthiveeran and Komban (also directed by Muthaiah). He excels in action scenes, but his performance lacks energy.

Aditi Shankar shines as Thaenu, in her debut film. She plays an young girl who supports her family and is affectionate towards her sister, married to Muthupandi’s elder son. While the actor has done justice to her role, her character is similar to heroines that are seen in movies set in rural Tamil Nadu. In the beginning, she does not like Viruman, but falls for him in the next 15 minutes. Saranya has very less screen time, but her emotional scenes create an impact. With Soori as Kaarthi’s friend, there is no dearth for comedy.

Although Viruman is not a casteist film like Komban, it has similarities with the movie, and the audience may feel they are watching another passable movie set in Thevar-dominated south Tamil Nadu.

You may wonder why a tehsildar father did not get his sons educated and settled into a steady job. Though not casteist, the film, being set in the hinterland, has plenty of advises to men, about loving their partner, children and family.

Muthaiah may be the only Kollywood director who makes movies that are set in south Tamil Nadu, showing many of the practices of the Thevar community. Viruman too talks only about the deep sense of casteism and family disputes still prevailing in the hinterland of south Tamil Nadu.