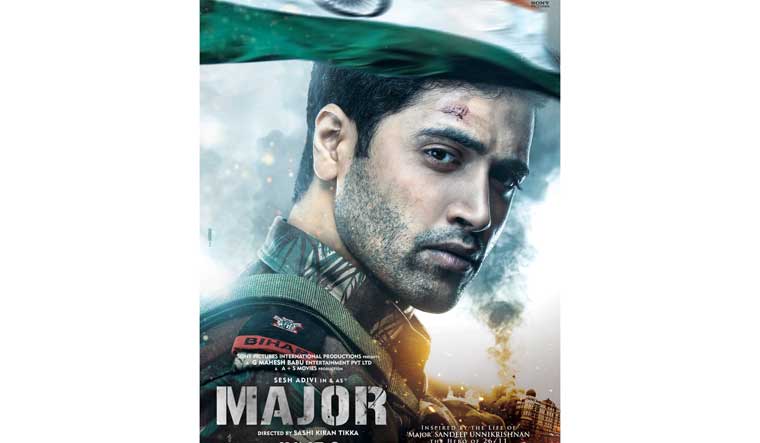 When audience step into theatres to watch Major, they have a fair idea or at least an inkling about the 26/11 terrorist attack and the role of soldiers like Major Sandeep Unnikrishnan in it. Even with the absence of surprise elements, the biopic comfortably accomplishes what it sets out to do in two aspects. First, the supreme sacrifice of the Major gets registered and so does the suffering and turbulence his family undergoes while he is loyally serving the nation. While the movie does stretch a bit when it comes to creative freedom, it props up an important question- can biopics be tweaked to do justice to the subject? If yes, then what should be the holy yardstick that would prevent the movie from falling into the bracket of fiction.

Major is not your regular commando movie. It is high on emotional drama and is centred around Major Unnikrishnan and his humane side. The movie opens with the scene featuring a bloodied Major Unnikrishnan, played by Adivi Sesh, in a black cat suit at the Taj Mahal hotel in Mumbai. The flashback kicks in and we are introduced to his childhood. Prakash Raj and Revathi, play his parents. As a child, Sandeep is fascinated by uniforms and dreams of becoming a soldier while his family has other plans. As a teen, Sandeep is mischievous yet caring.

The first half of the movie is dedicated to the romantic track between the lead actor and his love interest Esha (Saiee Manjrekar) who he meets in high school. Though the romantic scenes are innocent and appealing, they also slow down the pace of the movie. The couple grow fond of each other but Sandeep’s burning desire to be a soldier drives a wedge between the two. Sandeep gets rejected by the Navy but succeeds in cracking the Army and goes to the NDA. How he wins back his love, turns into a National Security Guard (NSG) commando and lands up in Taj Hotel Mumbai on the ill-fated day forms the rest of the story. Whether it is a revelation or an exaggeration, Sandeep’s character is shown to be dodging bullets of terrorists at a time when his marriage hits rock bottom, which further elevates his character. The second half is completely dedicated to action sequences inside the hotel. Shobhita Dhulipala has a special role and plays her part sincerely.

For a movie dedicated to an army officer, a major letdown in Major is overlooking military aesthetics. The way Adivi Sesh and his team move, confront or defend themselves is more cinematic than professional. Not once in the movie does Adivi Sesh sport a military cut and also does not wear the mandatory NSG helmet at Taj while the rest of his team does. Towards the end, one realises that there is a great mismatch between the actual accounts reported and what has been shown in the movie. Adivi Sesh as Major Unnikrishnan is charming and convincing. His screenplay could have been better.

Action sequences have been choreographed well. Saiee Manjrekar fits well in her role. Revathi and Prakash Raj are at their best, as usual. Director Sashi Kiran Tikka might have passed the test, thanks to the hyper-nationalistic wave prevailing in the country and also because of the image that late Major Unnikrishnan carries. The movie probably should be judged less for its cinematic performance and more as a tribute to a fallen hero and a son of the soil.