Dhaakad review: This Kangana-starrer is action-packed, but superficial

The lead cast of Ranaut, Dutta and Rampal, is a treat to watch 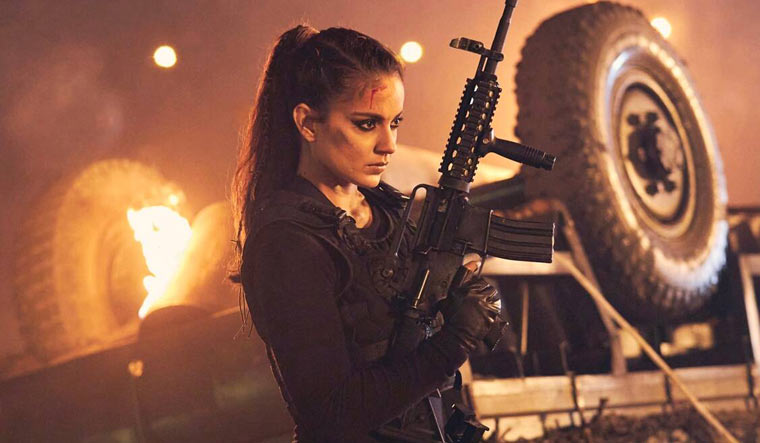 Dhaakad is a popcorn film; an almost-edge-of-the-seat action thriller led by an able cast, spectacular action sequences and meticulous execution. The only problem? It is as superficial as it can get. The film makes you feel as if you are passively involved in an overstretched video game that is heading nowhere and gets over before you even begin to make sense of it.

Agent Agni (Kangana Ranaut), a go-getting field officer of the International Task Force, grapples with childhood memories of her parents' murder, and has taken a vow to ensure that no girl suffers a violent childhood. She's on a mission to clamp down on and eliminate the human trafficking network helmed by Rudraveer (Arjun Rampal), a cold-blooded coal mafioso, and his aide Rohini (Divya Dutta). Agni's encounter with the duo makes for most of the climax of the film.

The lead cast of Ranaut, Dutta and Rampal, is a treat to watch. In fact, Dhaakad stands out for everything - from direction to cinematography to editing – but a strong and meaningful script. Ranaut impresses with her versatility in the role of Agent Agni, who “is in the business of separating bodies from souls”. But, in almost every single frame of hers, there's an overdose of bullets and gore. Complementing her are Dutta and Rampal. The space given to both of them is limited, but despite the constraints, their performance is striking. At a time when action-oriented films are mostly restricted to male actors, Ranaut's gender-bending 'action jugalbandhi' with Rampal – matching sword for sword, punch for punch, and kick for kick - is an absolute feast to the eyes.

The absence of a cogent character arc is acutely felt through the film. Sharib Hashmi does not look believable as father to little Zaira while Saswata Mukherjee seems to have essayed his part quite effortlessly. Thankfully, film does not digress into needless song and dance sequences; not that the music is exceedingly hummable or even noteworthy.

In fact, director Razneesh ‘Razy’ Ghai, who co-wrote the script, could have made Dhaakad a true-blue action film minus the fake melodrama.