Thar review: Old wine in a rustic but beautiful bottle 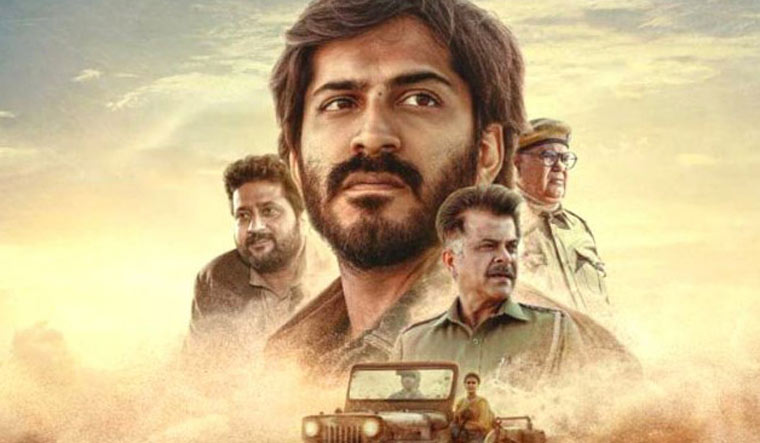 Bloodthirst and revenge form the underlying theme of Netflix's Thar directed by Raj Singh Chaudhary. This is a dark, grisly and spine-chilling film that has all the ingredients essential to keep the audience hooked right till the end. Aided by exceptional cinematography that brings to life the spooky backdrop of rural Rajasthan, Thar is the perfect example of how a basic, done-to-death plot based on love and revenge can be successfully milked using a combination of a captivating setting (the sights and sounds of the Thar), a stellar cast, able direction and impeccably crisp storytelling.

The five-film-old Harsh Varrdhan Kapoor had told THE WEEK that Thar is more of a character-driven film than a star-driven one. That is evident by way of his own portrayal of Siddharth, a vicious retribution-exacting lover with a deadpan expression who comes down to the barren and burning sands of the Thar from New Delhi to hunt down three men who mercilessly killed his girlfriend.

Yet, even as the father-son duo seem to have internalised their characters as the killer and cop respectively, it is Kapoor senior who takes the cake and the cherry. He is reason enough to watch the film, and then want to watch it again. The Kapoors have much at stake with Thar, given it is also a completely in house production and Harshvarrdhan is still finding his feet. While Anil Kapoor as a weather-beaten officer is a natural, his son too, essays the negativity of a violent criminal in the most relatable way, except that he hardly has any dialogues to his credit. One can literally count the number of times, if at all, Harsh Varrdhan Kapoor has said anything in the film except in monosyllables. Of the supporting actors, Satish Kaushik is endearing as the physically unfit, lower-caste colleague to Anil Kapoor's inspector Surekha Singh.

Chaudhary who had earlier made Shaadistan, a cringing take on feminism, lends a maturity and nuance to Thar which is refreshing. The dialogues by Anurag Kashyap fail to hold much weight, except that every dialogue begins with a cuss word to make it look impactful. Fatima Sana Shaikh is smouldering in every frame and lends herself well to the portrayal of her character as an insignificant wife. Surekha Singh has to solve the murders carried out by Siddharth, an antique dealer, in a village called Munabao in Rajasthan and in doing so, he looks for fulfilment in the last leg of his career as an inspector.

Thar's gripping atmospherics, set in 1985, is captured evocatively by Shreya Dev Dube, as the narrative unfolds in the desert's grim expanse. The film offers variety; there are criminals, opium smugglers, an antique trader, policemen and women in domesticity, yet, one cannot help but feel that some more action on the part of the leading duo, especially Kapoor junior, would have made his character so much more meaty and his performance so much more endearing. This is a film that offers a thrilling and exciting cop-killer chase across a vast barren landscape, except that the dialogues add nothing to the drama and the climax seems hotchpotch. Yet, this is a relatively easy watch, if nothing else, for the eternal appeal of Anil Kapoor and Harshvarrdhan's good looks.