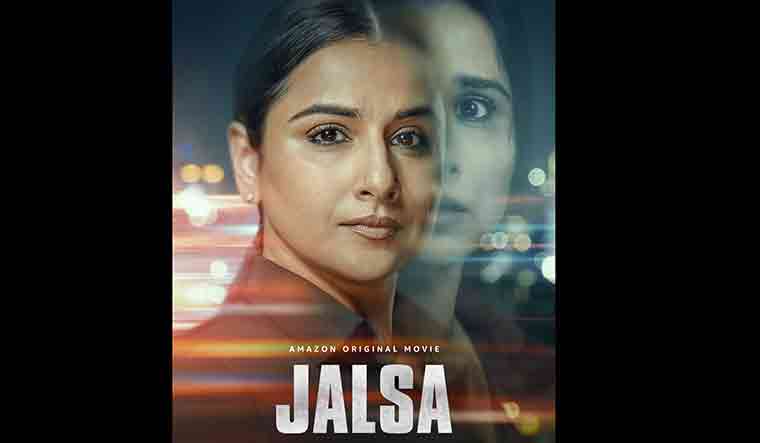 Very early on in the film Jalsa, directed by Suresh Triveni, one is stirred, shocked and spooked. A young teenager and her boyfriend are having fun-- chit-chatting and running around on a deserted pedestrian bridge post-midnight when suddenly the girl gets uncomfortable and begins to walk away. As she stomps out and the boy chases after her, she's hit by a speeding car that flings her in the air before throwing her onto the footpath, her body badly injured and bloodied.

The woman behind the wheels, Maya Menon (Vidya Balan) a top-notch investigative journalist working for a TV channel who is a few pegs down, takes one look at the girl she's just knocked off through her rear-view mirror and then speeds off. All the while her hands trembling with fear, guilt and rage. In a few minutes we are told that the girl who somehow magically manages to remain alive and continues to fight for her life inside a hospital is the daughter of Menon's house help and cook Ruksana (Shefali Shah). And as if offering multiple layers of morality for the audience to dissect and understand, Ruksana is the one in charge of Menon's own and only child, the physically challenged Ayush (Surya Kasibhatla).

In many ways, Jalsa is a commentary on the whirlwind of emotions that envelop us in the face of a tragedy, an accident and personal loss and the interplay between our own inner morality against the overbearing context of ambition, power, class and greed. Given that Menon's public image revolves around her integrity and uprightness, it is not easy for her to accept and admit her guilt of knocking down her maid's daughter but she eventually does it right towards the end, and coincidentally her acceptance and admission come right at the time when Ruksana decides to give it back and revenge her daughter's misery by unleashing fear and dread on Menon's son when she leaves him all alone mid-sea to help himself.

For most of the film, Ruksana remains unaware that the woman whom she is working for, whose son is under her care day and night, is the same woman who has unleashed pain and agony on her own daughter and when she finds this out, her own conscience is put to test. Jalsa is a film that will be relatable at so many levels for so many people; an unslottable film that speaks about life itself, to anyone who is willing to hear. It is the element of chance that's peppered across the film that makes Jalsa intriguing and engaging.

Both, Shefali Shah and Vidya Balan transport the viewer into a universe of emotions; Shah as the distraught and progressively bitter Ruksana and Balan as one who struggles to hide her guilt behind layers of confidence. The casting of Surya, who has cerebral palsy by birth that has impacted his ability to walk and speak clearly, is one of the many reasons why the film must be celebrated. On his own website, Surya mentions, 'I have speech impairment, but I can still speak 3 languages (English, Hindi and Telugu). In spite of these troubles, I am a very positive, happy, hardworking, and a determined person, and I don't let my disability hinder my confidence and work!  I have a knack for music, learning languages and cooking. I play keyboard and sing songs. I have also learned to speak basic conversational Spanish.' And that his character was not essayed by an actor but by him alone, makes Jalsa worth watching. The film is fast paced and keeps the viewer gripped at all times.