Shetty proves that when it comes to larger-than-life action flicks, he is the best 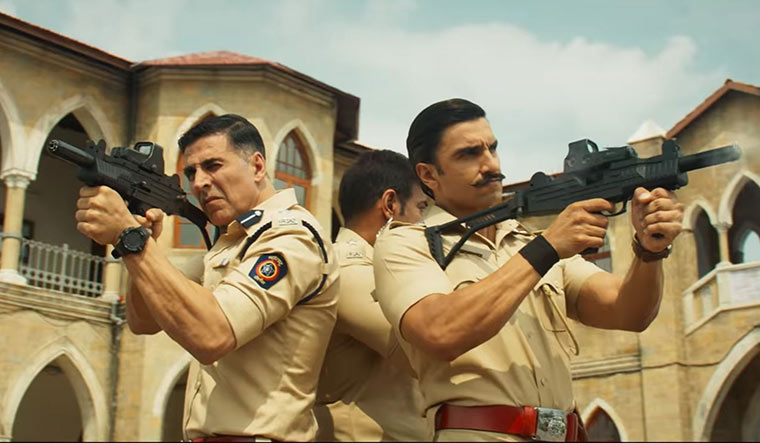 What do you expect from Rohit Shetty? A romantic movie? An action flick? A comedy caper? Well, a Shetty film is indeed all these!

For Bollywood commercial movie lovers, Akshay Kumar-Rohit Shetty combination is certainly one to look forward to, and hence there was much hype surrounding the release of the cop drama, Sooryavanshi. This was also a film that promised to bring back people in large numbers to cinemas, post the COVID-19 gloominess.

Even before the release of the trailer, the cine goers were sure that Shetty was  cooking up a delicious (commercial) cinematic treat. He had, in Simbaa, announced Veer’s (Kumar) entry into the fourth installment of his cop universe.

Sooryavanshi opens with a happy couple on their way to meet their son, Veer,  but dies in a terrorist attack. It doesn’t come as a surprise that Veer grows up to be ‘Veer Sooryavanshi’ (Kumar), an Anti-Terrorism Squad officer. There is of course the typical Shetty mas entry of the hero, on a helicopter this time.

As Veer goes undercover to find 600kg of RDX hidden away in Mumbai and to foil an attack by terrorists, you see that he is forced to prioritise his job over his family. As the movie progresses, you are offered plenty of chances to hoot and whistle as the other heroes in the universe, Ranveer Singh's Simmba and Ajay Devgn's Singham, make their grand entries. The the comedic exchanges between Simmba and Veer are perfectly timed and offers a respite during the otherwise intense proceedings.

The 145-minute movie doesn't only leave craving for more, perhaps another installment in the universe, but also raises a few pertinent questions about terrorism and the intentions of people who seek to destroy the harmony and secular fabric of India.

It is impossible not to applaud for 54-year-old Kumar’s dedication, as he has performed 90 per cent of the stunts in the movie. The actor looks effortless in both action and comedy sequences.

The leading lady, Katrina Kaif, tries hard to make her presence felt with a doctor-patient love affair.  The makers have even tried to recreate Akshay Kumar and Raveena Tandon’s famous number ‘Tip Tip Barsa Pani’ with Kaif, but it does not work quite well.

On the musical side, Daleer Mehndi's ‘Aila Re Aillaa’ is sure to find some space in your favourite playlist.

Shetty has once again proved that when it comes to making larger-than-life action flicks, he is the best out there. With the customary flying SUVs and logic defying action sequences, Sooryavanshi is everything that you expect from his cop universe in this Diwali season.