Home review: This tale of an impossibly good man and his family is a great Onam treat 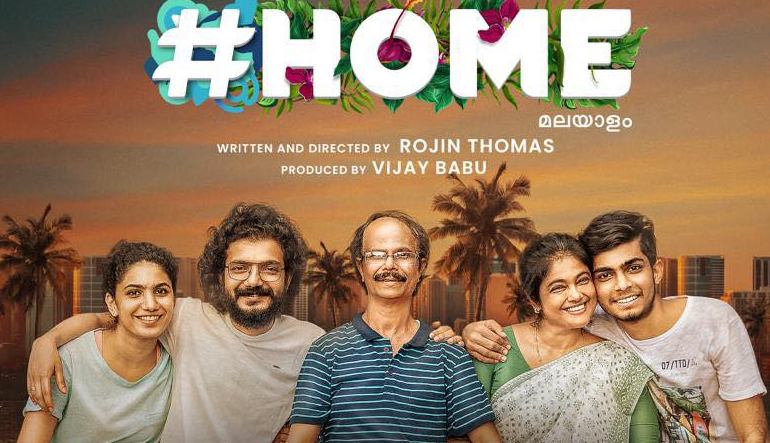 Heroes walk among us, often noiselessly. Their stories may be hard to believe, and might even call for suspension of disbelief. Oliver Twist is one such hero, but this one is not from Mudfog, although Dickens gets enough credit in Rojin Thomas's Home.

Rojin Thomas's Oliver Twist (Indrans) is fascinated by smartphones, but he is not your average uncle on WhatsApp whose favourite pastime is forwarding good morning/noon/evening messages and aggressively defending every bit of (mis)information floating around in the social media. There is Suryan (Johny Antony) for all that. Oliver Twist is yet to join the smartphone bandwagon when you meet him first.

Twist wants to master the art of WhatsApp, Facebook and everything that there is on the smartphone as he hopes this will get him closer to his sons—filmmaker Antony (Sreenath Bhasi), whose success with the first movie has cast on him a huge burden of expectation, and Charles (Naslen K. Gafoor), an engineering dropout, who now turns every second of his waking hours into a vlog. The sons love their father, but take him for granted. Oliver Twist wants to be part of their lives, but they hardly seem to have any time and energy left to initiate their boomer dad into their gadget-dominated lives.

When Oliver Twist finally lays his hands on a smartphone, it only takes him further away from his sons and results in unintended actions that threaten to ruin their family.

The plot of Rojin Thomas's Home might read like an insipid commentary on technology that divides families, but the movie is far from that. It is an intimate portrait of a good man, and the imperfect people around him, their little joys, disappointments, laughs and tears.

Over a career spanning nearly four decades, Indrans has evolved from a slapstick comedian who was the butt of many a distasteful body shaming jokes into a performer with gravitas. In Home, the actor is able to metamorphose into a man who exudes innocence. His Oliver Twist has a charm reserved only for the truly gullible, and whose heart is always in the right—a Dickensian hero, not the grotesque or the comical figure, but the naive but jolly David Copperfield type. In innocence and in the goodness of his heart, he resembles Prince Myshkin or the third Karamazov sibling. He is an impossibly good man! Even when his son makes fun of him, makes him feel insignificant, he takes it in his stride, despite the fact that he, too, has an extraordinary tale to tell. His story does call for some suspension of disbelief, but you would do it gladly for him, for Home's Oliver Twist is a saint of a man, and this is Indrans' best performance till date.

Indrans isn't the only one whose performance will mesmerise you. If Oliver Twist is one man that you will find it hard to come across, his wife Kuttiyamma is almost every mother that you meet, and Manju Pillai is exceptional in her portrayal as a loving but no-nonsense mother. If you are not familiar with Manju Pillai, good for you, she will surprise you. If your are familiar with her, she will surprise you nonetheless.

Bhasi is perfectly cast as the young director suffering a creative block. Antony is angry, annoyed and isn't sure if he will ever come up another perfect script. He doesn't look up to his father, and doesn't believe his story, but watch out for the moment when Bhasi's Antony acknowledges his father for the real hero that he is. Naslen is another surprise package. Charles is every enthusiastic youngster with a phone camera and dreams of making it big as a vlogger. Charles embodies the many aspiring vloggers you come across on many reels and videos that flood your feed, and Naslen is indeed a delight to watch.

Johny Antony as Oliver Twist's long-time friend and man Friday Suryan, gives you quite a few chuckles, and the rest of the cast, including the producer of the movie Vijay Babu and Deepa Thomas of Rock Paper Scissors fame, Aju Varghese and Kainakary Thankaraj, come up with convincing performances.

If the film tends to be a bit preachy, it is about an important topic, that of mental health, and the discussion is much warranted.

The background score of the movie tends to be tad over the top, as is the case with most of the feel-good movies, and at nearly three hours, the film could have benefitted from a tighter editing. That's a minor complaint for the bundle of delight that this film and its central character is. Neil D’Cunha's cinematography is pleasing, especially when you are at Oliver Twist's house, and when the director takes you to Twist's childhood days.

Home is a gratifying Onam watch, and is sure to leave you with a hearty smile as you step out of Oliver Twist's happy place when the credits roll.