‘Netrikann’ review: Nayanthara-starrer is a predictable thriller that tries to pass a social message 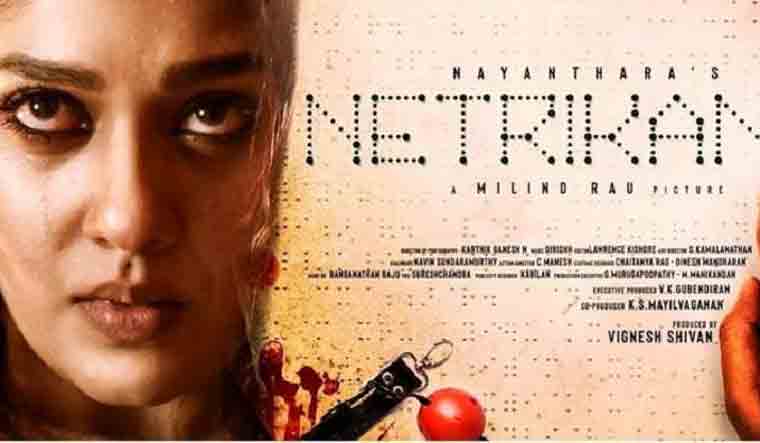 A bustling city, missing women, murders, a sexual predator, and a police probe—Nayanthara-starrer Netrikann blends in all these elements of common crime thrillers that we often get to see. Despite the predictable format, director Milind Rau’s film manages to hold the viewer’s interest.

Netrikann, which was released on Disney plus Hotstar on Friday, follows Durga (Nayanthara), a visually challenged woman whose path crosses with the antagonist essayed by Ajmal Ameer. Durga is introduced as a CBI officer as the film opens, but that part of her life lasts only a few scenes—she meets with an accident which results in loss of her vision. Durga’s brother is also killed in the accident. Rau does not waste a lot of time delving into her background. The beautiful lyrics of Sid Sriram’s ‘Idhuvum Kandandu Pogum’, play along as Durga is shown struggling to learn to live with her new world—one without light. Her companion dog also plays a pivotal role in a crucial scene in the film.

While Nayanthara appears to struggle to fit in to the role of a visually challenged woman in the first half, she is in full form in the second half as the movie picks pace. The actress was last seen in Malayalam movie Nizhal, yet another thriller. What works for Netrikann is that Nayanthara goes for a de-glam look, which helps the viewer to not see the graceful lady superstar, but a woman struggling to save herself from a predator and eventually locks horns with him. Nayanthara delivers a powerful performance in the climax scenes.

For a film in this genre, Netrikann is a tad too long and one can feel like a drag towards the end. A bit tighter editing would have helped. Ajmal Ameer does a decent job, portraying mannerisms that were required from his character James Dinas. However, Netrikann breaks with the ‘serial-killer movie’ tradition by not taking the long trip down into the traumatic past of the criminal. The movie only scratches upon the surface, with a few names of mental health issues being thrown at the viewer so that he/she can research what was going on in the criminal’s mind.

Rau, who has also written the screenplay of the film, uses the film to quickly touch upon some social issues like abortion, women’s right to their bodies, and their choices. In a crucial scene in the movie, Nayanthara mouths a dialogue about men and their definitions of ‘good women’ and ‘bad women’. In a theatre ambience, that could have got some cheering from the women in the audience. The film, said to be loosely inspired from Korean thriller Blind, manages to set it well into the Indian milieu.

Netrikann certainly has its loopholes. For instance, through the first half, one may wonder how a sub inspector can spend all his time and police resources to rope in a visually challenged woman to help him investigate a crime. The stereotypical scenes of sexual homicide in movies—including women tied up in a room with red lights and some background score to go along—could have done with some creative improvement. The profession of the antagonist may also come across as a disturbing detail for women viewers. All said, Netrikann is an easy one-time watch that packs in all the elements of the genre without overdoing it.