Masurkar's direction is sharp and meticulous 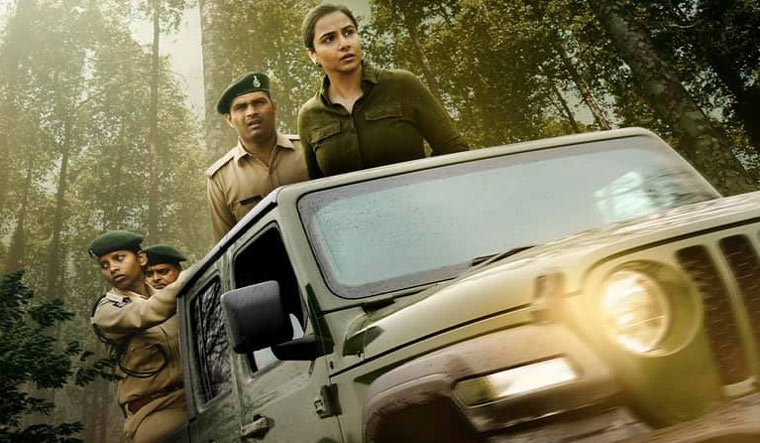 A riveting story revolving around the man-animal conflict inside the deep and dense jungles of Madhya Pradesh, Sherni is a thrill to watch for both its realism and striking cinematography which take the viewer right into the thick of the forest as it undertakes the ambitious search for the man-eating wild cat.

The story is beautifully layered; it deftly touches upon complex topics - a cross between well-meaning foresters and their battle for conservation on the one hand and mean-minded politicians who turn it into poll agendas on the other - which essentially place the villagers and their vulnerabilities at the forefront of this conflict. The story is about a T12, a wild tigress which has made it dangerous and almost impossible for the villagers of Bandarpur to graze their domestic animals in the adjacent jungle for fear of the cat's attacks. The film is an instant reminder of T1, the actual tigress that was accused of killing 13 people in Maharashtra's Yavatmal district before she was shot dead by a civilian hunter who was out to show off his "killer instincts." Many activists described it as ‘cold-blooded murder’ and the case even reached the Supreme Court of India. In the film, this civilian, cold-blooded  hunter is the veteran and very able Sharat Saxena, who murders the wild cat, thereby failing the most fool proof plans prepared by forest officials led by DFO (District Forest Officer) Vidya Vincent (Vidya Balan), on how they could have instead traced and tranquilised the cat to rescue it in the nearby national park.

With Balan playing down her star status and coming as close to a woman forest officer as possible, the film is a compelling watch, for both, the way the issues of conservation and conflict are dealt with as well as the way in which the young Vincent tackles patriarchy and a male-dominated service. In this film, there are two Shernis - the real Sherni or the Tigress T12 and the metaphorical Sherni as Vidya who must make her voice heard in a male dominated universe she is a part of.

The best part of the film is the manner in which the viewer is journeyed on multiple forest trails as officials trace the pug marks and signs of the wild cat's presence. But even then, it doesn't really bring out the Wow factor - the majestic royalty of the wild beast; if only, the indulgence was more heightened and thrilling than it presently is. The film is an eye-opener also on how the forest service goes about its daily job, simultaneously negotiating danger and dilemma. As an official on one of the trails, quips, "The tiger will see you a hundred times before you see him once."

The cast is stellar and very relatable and Masurkar's direction is sharp and meticulous. Little details are captured fantastically, to make a point and the jungle comes out alive in the direction. Even as he brings out a project after three to four years on an average, each one outdoes the other - Sulemani Keeda to Newton and now, Sherni. Adding spark and meaning to the film are established actors like Vijay Raaz, Brijendra Kala, Ila Arun and Mukul Chadda, all of who make this film a must-watch.