The movie is not fully convincing, and ends up becoming a rather forgettable watch 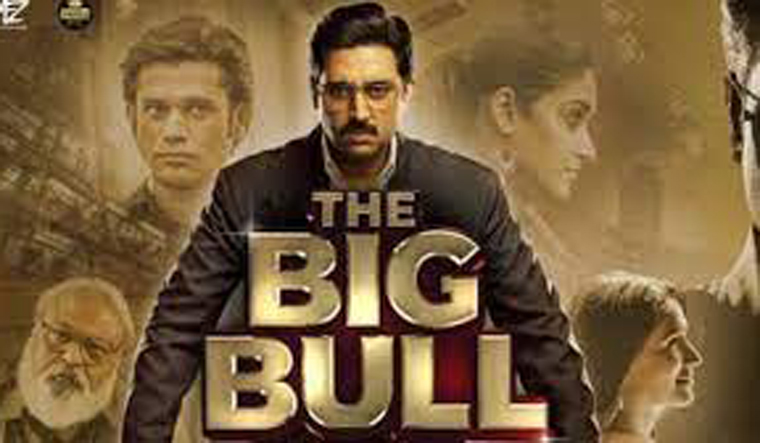 This film might be all about a fictitious stock broker going by the name of Hemant Shah. But, it becomes amply clear right from the promos that the The Big Bull is based on the life and times of stock broker Harshad Mehta.

To make a film on and tell a story about one of India’s biggest capital market scams is not easy. Releasing this movie just a few months after Sony Liv released a full web series on the infamous stock market investor makes the job even harder.

Abhishek Bachchan plays the role of Hemant Shah, a lower middle-class Gujarati who dreams about making it big, and stumbles upon stock market investing as the easiest way to do it. Shah’s brother Viren, played by Sohum Shah, is a small-time sub-broker. But, Hemant is not satisfied making a few thousand bucks, and wants to break through the small circle of influential share brokers. The first half of the story revolves around Hemant finding loopholes, whether it is in the banking system or insider trading in stocks, using it to make crores. Within no time he goes from being a small sub-broker to the country’s first billionaire.

The chairman of the stock exchange, who is named Mannu Malpani and played by Saurabh Shukla, tries to warn Hemant that insider trading is illegal in many markets,  and that the laws in the country will one day catch up with him. His brother and mother also try to convince Hemant to slow down. But, all these attempts come to no avail. In a scene shot in a temple, Malpani tells Hemant that someone who goes up and up also comes down and down. From there on, the film track changes and it is all about Hemant’s downfall.

Eventually, Hemant is convicted and sentenced to jail just like Harshad Mehta was. Hemant, just like Mehta, dies of a sudden heart attack. However, the director Kookie Gulati has also tried to indicate that he was perhaps silenced.

Throughout the film, the director has used a lot of cinematic liberties. But, some instances are just over the top. Journalist Meera Rao, played by Ileana D’Cruz, who is also the narrator of the film, likens Hemant’s crime of gaming the system to the first 40 years of India’s Independence, during which she says there was hardly any development, and that was a crime too.

There are several instances where you get the feeling that the director has tried to humanise the character of Hemant Shah, and attempts to show that perhaps Hemant was made a scaepgoat while other powerful people, including politicians, went free. It is not fully convincing though. Hemant is shown as a messiah of the aam aadmi and there are several dialogues where ordinary people are shown thanking Hemant, because of whom they could start investing in stocks and make money only due to Hemant. At one point he becomes like a god to the common man. The fact that many people also lost money after the scam was exposed, and that markets crashed, gets lost somewhere in this narrative.

This film is undoubtedly about the character of Hemant Shah, and revolves around him. But, by throwing too much spotlight on the central character, the other characters, including his brother, mother and wife, don’t get enough chances to bloom.

Abhishek, as the flamboyant big bull in Hemant Shah, is also rather unconvincing, with hardly any Gujarati conversation throughout the film. Furthermore, more than once in the film, Hemant is heard saying he has no time to slowdown. Yet, in between, he has time to romance his neighbour played by Nikita Dutta, whom he eventually marries. The two even dance around Delhi’s famous monuments in a song in true Bollywood style, before Hemant sets off to meet a son of a top politician. That only adds to the distraction from the main issue at hand.

Since Scam 1992 was a webseries, Hansal Mehta had ample to explore the man (Harshad Mehta) and the scam in detail. Trying to do that in just two-and-a-half hours, with the typical Bollywood melodrama thrown in, fails to inspire and ends up becoming a rather forgettable watch.