Selvaraj has sculpted each character with the finest details 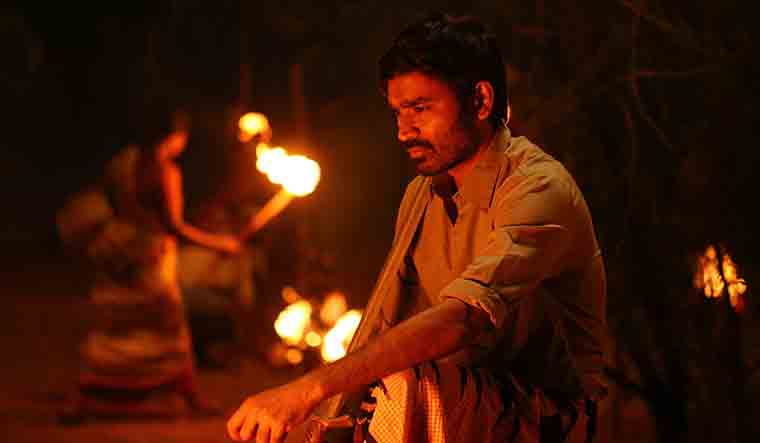 Set in a village called Podiyankulam, in the deep suburbs of Tirunelveli, Karnan is the story of an angry young man and his people defying years of oppression.

Directed by Pariyerum Perumal fame Mari Selvaraj, with Dhanush K. Raja in the lead, Karnan’s opening shot itself is disturbing . A little girl lies on the middle of a road. No vehicles stop to rescue her. With no one to help, she succumbs to fits. Soon, Easwar's camera pans  towards the sky, signalling the need of a battle to defy oppression. And then Santhosh Narayanan's all-time best 'Kanda Vara Sollunga' begins with the rustic beat, setting the mood for what awaits the viewer.

An entire village prays for the return of Karnan (Dhanush). Clad in a murky lungi and a torn shirt, a young man with his hands cuffed, head covered with a black cloth and blood on his feet, is shown as being pushed out of a police van. The people draw his image with charcoal and fire on a wall. The story then cuts back to 1997, to Podiyankulam, a small village which is home to a group of oppressed people.

Backed by a powerful script, the film tells a tale of the village fighting the powerful, dominant caste, including those in the bureaucracy.

For people in Podiyankulam, struggle lies even in the little things. The village does not have even a bus stop. Men and women walk long distances to the nearby Melur bus stop or stop the vehicles which pass by to commute. And people of Melur use this as a reason to further oppress them.  Karnan and his young men vandalise a bus when it does not stop to help a pregnant woman from the village.  And things come to a flash point when the district SP, Kannapiran, played by Natrajan akka Natty, comes into the scene. An egoistic officer, Kannapiran's action and Karnan's anger lead to more bloodshed. Karnan's love interest is Draupadhi, played by Rajisha Vijayan.

Mari Selvaraj, with his script, has sculpted each character with the finest details. Right from their attire to the work they do, each character adds value to the script. The first half builds the characters, while the second tells the defying tale. Karnan, however, is slow-paced with every scene making the viewer restless.

Karnan subtly reminds of the chilling Majolai riots of 1999 and the Melavalavu massacre in 1997, in south Tamil Nadu.

After Asuran and Pattas, with Karnan, Dhanush is back in complete action, perfectly slipping into the skin of the caharacter. And Natty is at his best as an egoistic cop. Yeman, played by Lal, is the character which holds Karnan's narrative together, scene by scene.