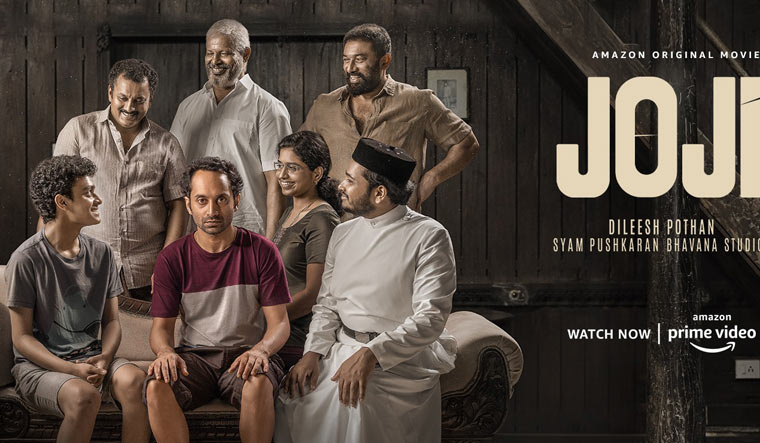 It is hard not to root for antiheros. They are rarely virtuous, they cut corners, make shady deals, and kill if need be. But despite all the scheming and malevolence, they aren't all that rotten. From Taxi Driver's Travis Bickle on the big screen to the most popular anti-heroes on small screen Vic Mackey of The Shield and Tony Soprano of the Sopranos, you could always spot some saving grace in the the anti-heroes, and would want to root for them, even when they spiral out of control.

Just like you would want to root for Joji, or may be you do not want to!

Joji is hardly an amoral man when you meet him first. In fact, he is just a feeble, good for nothing fellow—a "second piece" as his father calls him. Son of a rich plantation owner, Joji is often ignored and ridiculed by those around him, including his father and brothers. He is a total misfit. While the film, directed by Dileesh Pothan, is inspired by the Shakespearean classic Macbeth, and had shades of 1985 classic Irakal, Joji is nothing like the grand warrior anti-hero in the tragedy. Nonetheless, there is something that would connect the two—greed. Joji may be feeble and eccentric, but he is also wholly consumed by insatiable avarice. And much like Macbeth, there is progressive moral degeneration in Joji. While there isn't a Lady Macbeth in the life of Joji, there is a woman around him to question his manliness, and prod him towards an unthinkable crime.

The director, in a recent interview, had admitted that while Joji isn't exactly Macbeth retold, there could be parallels between the two. There is a murder most foul and other crimes by a man acting against his best interests, a hint of a prophesy that you might miss if you blink, and some frantic washing—in this tale of a man losing all sense of control—set against the backdrop of the rubber plantations in Erumeli and at a time when a pandemic has forced people to cover their faces (something that comes handy to Joji at one point) and stay a few feet away from each other.

When Pothan reunites with his Maheshinte Prathikaaram partners Syam Pushkaran (script), Shyju Khalid (behind the camera), and of course Fahadh Faasil, one can't be blamed for expecting repetition of the magic. And they do not disappoint. Joji isn't your quintessential run-of-the-mill thriller; there aren't clever twists and unpredictable moves. What sets Joji apart is the director's ability to make his hero amoral as time passes, and make him go totally out of control, all the while maintaining a veneer of sanity. Despite the tragic theme, the movie has plenty of lighter moments. The director, with the subtlety of a sledgehammer, takes a dig at religion and its custodians, the society that is only too eager to pry into the affairs of the odd one out, and the privileges accorded to men.

Fahad dexterously embodies the frustration, confusions and madness of a misfit. The actor seems to have lost some weight for the role, to climb into the skin of a man whose frail frame and cowardice when met with physical violence hardly fit the bill of a hero, and walk around in it. You see him writhing in anger and desperation when met with violence or extreme disappointment, but the next moment he assumes normalcy, not like an actor would, but how a person like Joji would.

The rest of the cast, including Sunny P.N. (Thorappan Bastin of Spadikam), Unnimaya, Shammi Thilakan, Joji Mundakayam and Basil Joseph, come up with stellar performances to become people you would come across everyday in this neighbourhood. Baburaj as the alcoholic elder brother of Joji is a revelation. Of course, he is no stranger to pulling off occasional wonders, (the meek cook in Salt and Pepper), and Pothan exacts another fine performance from the actor.

Dileesh Pothan's Joji is a remarkable retelling of a tragic tale of greed, unbridled ambitions, crime and eventual self-destruction.