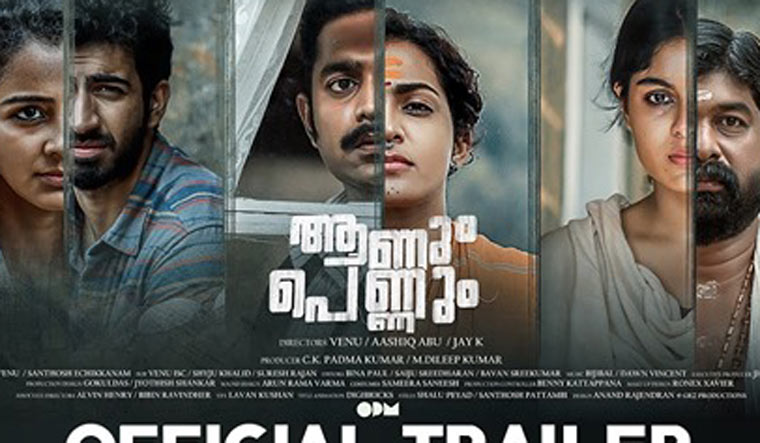 How does one define the word 'power' in the context of gender? In a patriarchal society where everything is designed to gratify the desires and comforts of men, women are often painted as 'weaker sex'. However, when it comes to survival instincts or coping with trauma, women fare better than men—that is a scientific fact. There are also studies that suggest that women can outlive men in almost all extreme conditions.

So, how fair is it to cling on to the popular perception that men are more powerful?

Aanum Pennum (Men and Women), a Malayalam anthology film conceived by Jay K. (Savithri), Venu (Rachiyamma)  and Ashique Abu (Rani) is a decent attempt to offer a commentary on the power equations between men and women. The three films also examine how men and women would react differently to certain situations. Though each of these films revolve around these themes, there is a need to treat each work as a standalone film.

Set in a period after the Punnapra-Vayalar uprising in the Travancore state, Savithri tells the story of a Communist woman. Punnapra-Vayalar was an armed revolt of the working class against the exploitative rule of Travancore Diwan C.P. Ramaswamy Iyer and the unjust taxation by the establishment. The period that followed the uprising witnessed the violence unleased on Communists in the state. Set against this period, Savithri begins with the eponymous protagonist fleeing from the police. She becomes a servant at a feudal household to lie low and avoid arrest. There she faces sexual advances from the men in the family. Savithri also witnesses the verbal and physical violence let loose by this family on her comrades.

Savithri, however, is not a victim, but a woman who dares to use her body and sexuality for the greater cause of fighting the oppressors.

However, the film is the weakest in this anthology. Though the movie stays faithful to the period it portrays, and Samyukhta Menon comes up with a decent performance as Savithri, it can hardly claim novelty in storyline or execution.

'Rachiyamma' is considered to be one of the most powerful and complex female characters ever created in Malayalam literature. Venu attempts to faithfully adapt Uroob’s 1969 short story of the same name.

The film tells the relationship developed between Rachiyamma, an outspoken woman, and a man who comes to work in a tea estate as an officer. It explores how deep a woman could invest in a love affair, and how men and women are different when it comes to setting priorities in a romantic relationship. Parvathy Thiruvoth delivers a stellar performance as Rachiyamma. She is well backed by Asif Ali.

The controversy that started some time ago about a “fair-skinned heroine” being chosen to play the role of a dark-skinned protagonist (Uroob visualised his Rachiyamma as a dark-skinned woman) could possibly come back to haunt the movie in the Malayalam movie forums on social media.

Ashiq Abu’s Rani is arguably the best film in this anthology, and much of the credit goes to Unni R. for the great script that  Aashiq Abu got to work with. Unni R. is a writer who could deliver riveting tales with some major twists, and Rani lives up to the writer's image.

The film tells the story of a college boy who persuades his girlfriend to come with him for a ride to an isolated place. She is reluctant initially, but agrees nonetheless. During the ride, they face an unexpected situation, that goes on to reveal how differently men and women react to traumatic circumstances.

Rani also explores how male and female brains are wired differently, especially when it comes to sex, and goes on to denounce the general perception that “women have lower sexuality or sexual desire than men." In the final scene of the film, you see a man and a woman forced to face the society in their nakedness. How they react to the situation tells a lot about the difference that exists between the two sexes.

Rani could trigger a lot of conversations around gender and sexuality in the coming days.

The online chemistry of Roshan Mathew and Darshana Rajendran is delightful, and their performances excellent.