The movie depicts feminism in its many layers 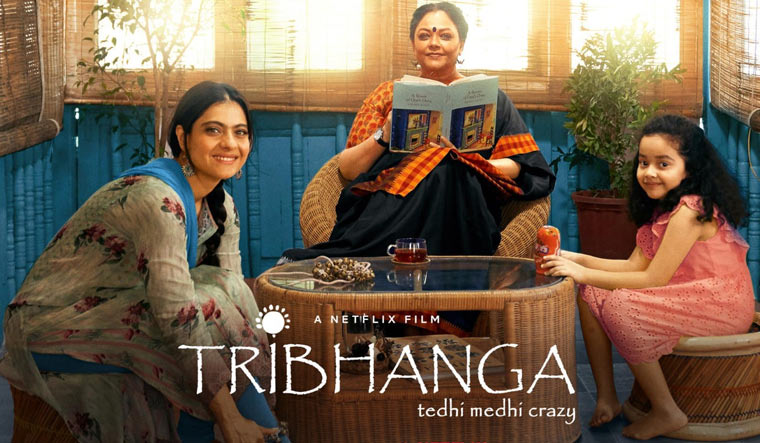 Women cannot have it all, seems to be the message of the movie, Tribhanga.

A movie about family, love and loss, Tribhanga tells the story of women belonging to three different generations. The choices two women from the older generation seem to have impacted the third generation considerably. It is depicted in how Masha, played by 'internet star' Mithila Palkar, chooses to be conventional.

The story does have plot holes, but the thought behind the film deserves attention. The women in the movie— Nayantara played by Tanvi Azmi and Anuradha played by Kajol— are shown to have shattered a few patriarchal notions women are expected to live up to. But, in the end, the message writer-director Renuka Sahane conveys is that women find it more difficult to strike a work-life balance. This is because they are expected to flit in and out of several roles at once. This can clearly be seen in how Nayan is shown failing as a wife, a daughter-in-law and a mother.

The point also comes through when Anu is seen trying to grapple with a physically abusive live-in partner. And later, when Nayan seemingly meets the man of her dreams. As a viewer, I am split between whether or not the narration was too fast or not just fast enough.

The setting and cinematography of the movie reminds one of movies like Shaban-Azmi-starrer Morning Raga or Dance like a Man, starring Anoushka Shankar.

Performance-wise, it may seem like Kajol is a tad over the top, but, her abrasiveness seems justified as the second half of the film unfolds. Tanvi Azmi, who plays a woman forced to make tough choices in the 80’s, comes out as the real winner. The talented Mithali Palkar isn't given enough screen time to bring out her acting chops.

Movies depicting complex relationships between women are rare and far in between. This seems more true of Indian cinema. Whenever women are the lead characters with flaws et al, they are immediately  categorised as a ‘bitch’ or a ‘manipulative shrew’. Right from Kaikeyi of Ramayana to Priyanka Chopra in Fashion have been shown in this light, where, in the end, they realise that they need a man to bring in a sense of completeness. This is the convention that Tribhanga attempts to defy, and manages to do so well.

Regrets and unspoken words are sentiments several storytellers and directors have explored. But, Renuka Sahane’s take is non-melodramatic. The movie may be a tough cookie to chew overall, but definitely deserves a one time watch. The movie depicts feminism in its many layers, and the greatest takeaway might be that the men just fade away in the background.