AK Vs AK review: A departure from straight-laced cinema style

The film is watchable for its novelty 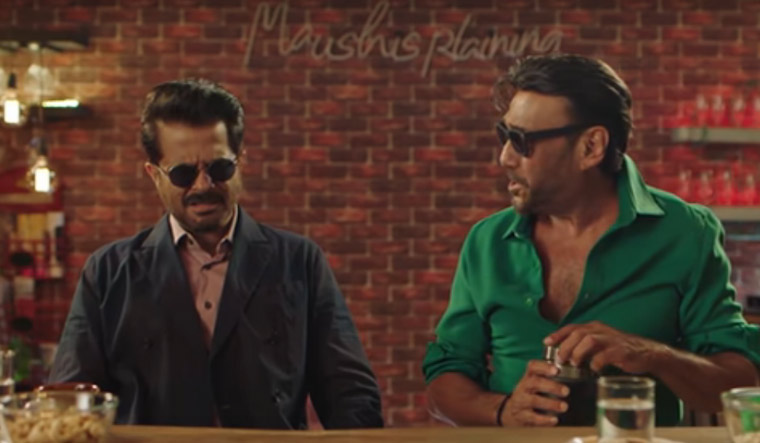 Netflix original AK Vs AK, directed by Vikramaditya Motwane (Udaan, Lootera, Trapped, Bhavesh Joshi) is watchable for its novelty, a departure from straight-laced cinema style in Bollywood. A meta experiment, cast in the mould of a mockumentary, this "work of fiction" has Anurag Kashyap and Anil Kapoor play their respective selves and trade stinging truths which are also perpetual conflicts between the old and the new, mainstream and the independent in the fraught world of entertainment.

"2020 mein aakar app bhi Mr India ho gaye ho...Invisible and Irrelevant...Is umar mein bhi aapko hero banna hai," charges Kashyap at Kapoor on a online chat show scuffle which devolves into a takedown of Kapoor with his face splashed with water. Kashyap, the maverick auteur, has to pay a price for publicly humiliating a "superstar" and starts to lose his actors and shoot dates. At one point, a harried Kashyap is amazed how even Nawazuddin Siddiqui could hang up on him. "I have made your career Black Friday, Gangs of Wasseypur, Raman Raghav, Sacred Games...," Kashap yells into the phone. He then joins forces with a rookie filmmaker who suggests making a hostage thriller, cinéma vérité style, by kidnapping Kapoor's daughter Sonam and shooting Kapoor's breathless race against time to find her. This could be the film Kashyap needs in his bid to make a dramatic comeback and settle scores with Kapoor for previous slights when he was a struggling director.

The action that follows plays out over a day on 24 December which is also Kapoor's birthday. It moves from his vanity van to his luxurious house, from a five-star hotel to Mumbai Central station, from Kashyap's apartment with his impressive DVD library to an abandoned mill in Byculla. Along the way, it features Kapoor's family members including Sonam, her brother Harshvardhan (who rues to Kashyap how his career failed to take off with Motwane's Bhavesh Joshi Superhero) and Kapoor's brother Boney, with Sonam's partner Anand piping up now and then on speakerphone. The hotfooted chase of a superstar father to find his famous daughter, without any cover among the hoi polloi has its moments, every time there are requests for autographs and selfies and acting-writing hopefuls. Both Kapoor and Kashyap are in on the ride, ready to make fun of themselves and lay bare their insecurities with a good deal of cussing to propel their clashes.

But beyond a point, the narrative seems a bit too stretched; it often appears too clever for its own good. Some of the plot twists seem unnecessary and the device of a television media ruckus to amplify the unfolding drama now needs newer, more exciting iterations. Some of the brutally honest statements are by now tired jokes and the ending is a lazy attempt to keep the audience on edge till the very last frame. But this undefinable film still holds together.