Soorarai Pottru: Suriya shines in this tale of sky-high dreams

Soorarai Pottru is Suriya's meatiest role in a while 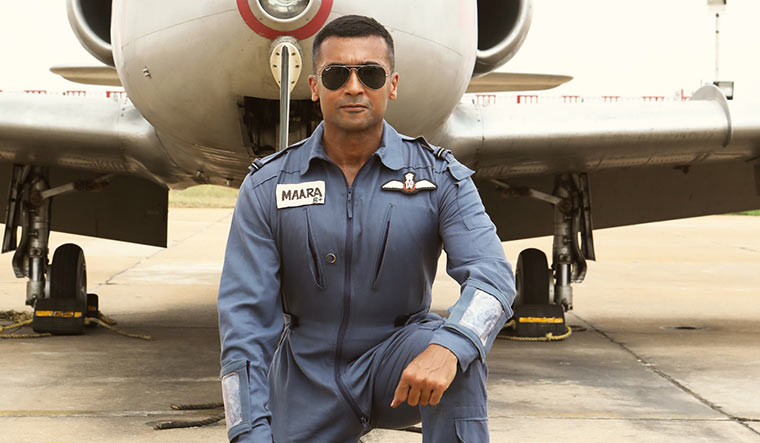 Dream big. You can achieve in your life. These words are definitely inspiring. But how long can you chase and fight for your dreams to succeed. The story of Nedumaaran Rajangam, based on the real-life story of Air Deccan owner G.R. Gopinath, is an inspiring story of a man obsessed with his dreams and willing to go anywhere to make it come true. And Nedumaaran aka Maara chases his dreams despite several setbacks in his life.

As the movie begins, a pilot asks the airport authority to give him permission to land his flight as there is no fuel. But the authorities don’t approve. And there begins the fight to fly. Soorarai Pottru, with Suriya playing the role of Maara, revolves around his dream to start a low-cost airline and the struggles in his life. He smiles, he cries, he gets angry, he protests, he fights, and finally he flies. And that is Maara. For the entire length of the movie, Suriya is the best in his emotions as Maara, the man from a rural village called Sholavandhan near Madurai. Hailing from a very humble family, Maara is the son of a school teacher, who always petitions the government for change. But unlike his father, he believes just petitioning won't work and calls his style a failure. Maara’s mother played by Oorvasi, again an excellent character, brokers peace between father and son. Her words, as she narrates the quotes written by Maara’s father in bit papers, actually makes Maara dream.

These characters, especially that of his two friends, played by Vivek Prasanna and Krishnakumar, truly stand out. And Sundari aka Bommi, played by Aparna Balamurali, is a real-life inspiration, narrating the character of a woman behind a man’s success. With her bakery dreams, Bommi comes into the life of Maara just to support him. And not to be missed, the movie at the beginning has the touch of the Dravidian land. Old women arguing with an upper caste Hindu in a train while travelling in an unreserved coach, and the self-respect marriage of Maara and Bommi, are some instances. Another character that deserves a definite mention is Paresh, played by Paresh Rawal, reminding the audience of a corporate villain, one who does anything for his business to be successful. Paresh Rawal, though his voice doesn’t match the emotions, is basically a man who feels that the rich remains rich and the poor always remain poor.

And Suriya, after movies like NGK and Kaapan bombed in the box office, stands out with the meatiest role. He emotes every delight and despair of the hero. Aparna, as Bommi, is equally good as the baker wife. But the chemistry between the male and the female lead doesn’t go well. Sudha Kongara’s characters, the execution of each character like Maara’s friend Kaali who gets injured during a protest to stop the train, Bommi’s uncle character played by Karunas, who gives 11,000 rupees to start the airline, are real strengths to the movie. Then comes G.V. Prakash’s background score, which matches the flights in the air, the crashing plane, and every bit of Maara’s emotions.

But the film is a little slow, failing to tingle the audience’s interests. As Maara fails each time, even when he has big ideas, the audience are let down. And more than all this is the time period during which the film is set in. Being in 2020, the audience are taken back at least three decades, the days when there were no mobile phones and only pagers and phones worked to connect people.

And Soorarai Pottru is yet another step forward in Suriya’s acting career.