The film is biopic of India's first woman combat aviator 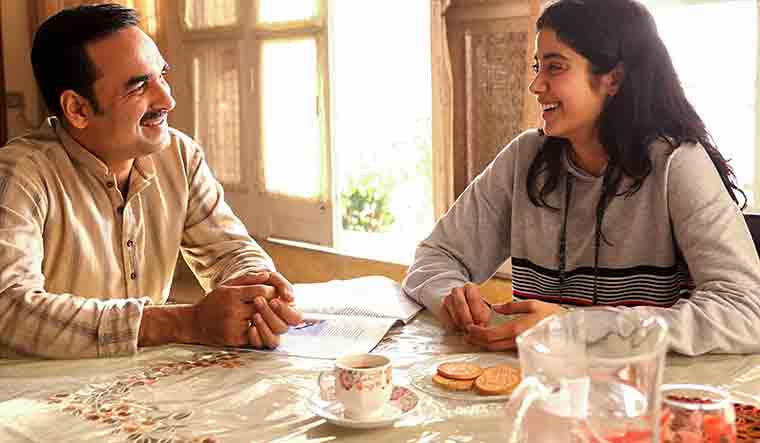 In the canteen of an Air Force base in Udhampur, the semi-nude posters of Pamela Anderson are being hastily removed, much to the ire of the officers sitting there. They are perplexed until informed that a big change is coming. Commotion follows in the background as the first woman pilot makes her entry at the camp.

It could have been filmy with music blaring to mark the entry of the titular character, played by Janhvi Kapoor, at that point. But Gunjan Saxena: The Kargil Girl keeps its filminess in check, often choosing to be restrained and refined in the retelling of the story of India’s first woman combat pilot.

Before it goes back to where it all began – that is in an aircraft where a young girl travelling with her brother hankers for a window seat before she is given access to the cockpit by the friendly in-flight staff. The film starts with an aerial shot of the Kargil Valley. Uniformed men from India are walking past a hilly terrain as they crack unfunny wife jokes when the neighbouring country attacks them. Rescue choppers are urgently needed. Gunjan gets her first rescue mission.

But a lot has unfolded in her life to reach this stage after that ringside view of the sky from the cockpit of an airplane as a young girl. Flying is the only dream she harboured. But she was often dismissed by people around her with the statement that women can’t be pilots, except for her supporting father, an army man, (played by Pankaj Tripathi) who believed that the cockpit doesn’t know if a man or a woman is sitting in it.

The film captures these emotions through the personal dynamic that Gunjan shares with her family. A worried mother (Ayesha Raza) who wants her daughter to study but isn’t sure of her ambition of being a pilot. A paranoid brother (Angad Bedi), who grows up to believe that it’s difficult for women to survive in the defence forces, which is hugely male-dominated. His reasoning comes from a place of concern, but is deeply misogynistic nonetheless. In the larger scheme of things, his character is symbolic of the widespread societal outlook.

His discernment isn’t completely wrong. With all the roadblocks on the way, Gunjan comes a long way to procure a place in the Air Force with destiny playing a part and the Air Force starting to induct women in the year she completes her undergraduate. But she has to face discrimination often, deal with an environment that is suitable for men but ill-equipped for women – no separate toilet for women, no changing rooms which she could use before a sortie, and unwelcoming colleagues.

Jahnvi as Gunjan in her sophomore feature (punctuated by a strong performance in the short film anthology Ghost Stories) after Dhadak, has a strong presence. The film shines with her delicate performance. But what really worked for me is debutant director and co-writer Sharan Sharma’s (credited earlier as assistant director on Ae Dil Hai Mushkil, Ye Jawaani Hai Deewani) focus on the father-daughter relationship.

It is because of that that Tripathi evolves as an on-screen father. It is as if he is charting a separate journey of playing fathers – from a guilt-ridden man who killed his new born daughter in Gurgaon as he absolves himself by adopting a girl later in his life, and then being a chilled out undiscriminating father in Bareilly Ki Barfi to now being an enabler of letting his daughter fly freely in this film, Tripathi is setting an example of how to be a father in this age and time.

Another laudable aspect of the film is the distance it maintains from being over-the-top jingoistic that most films in recent years have pandered to. The serious notes in the film are punctuated by mentions of the popular films and songs in the timeline it chooses to show – like the mention of Hum Aapke Hain Koun during Gunjan’s selection process in 1994, or the constant playing of Choli Ke Peeche… in the dining hall of the Udhampur base later.

That’s perhaps a good way to chart timelines too.