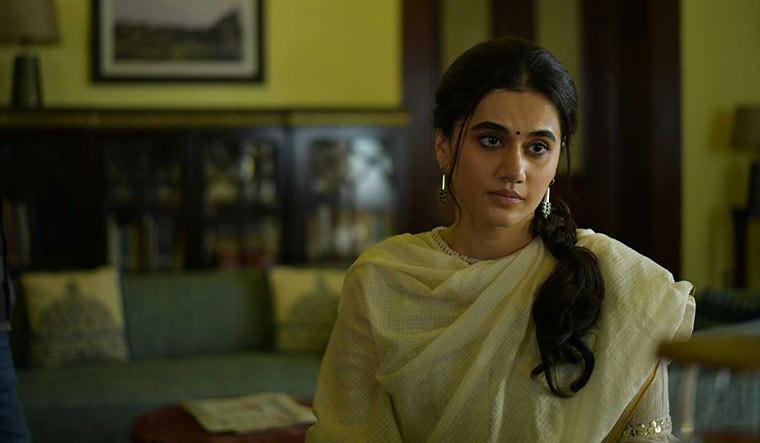 She is resigned to a routine. Amrita (Taapsee Pannu) is the archetype of the perfect housewife. She is the last one to sleep and the first one to be woken up by an alarm clock that she makes sure doesn’t disturb her husband sleeping next to her. She picks up the milk bottles from the porch, makes tea for herself, clicks a photo of the rising sun, checks her mother-in-law’s sugar level before waking up her husband with a tray of tea and snacks. She heaves a sigh of relief when she sees her husband, Vikram (Pavail Gulati), leaving for office with his files, coffee container and lunchbox.

Their life appears to be perfect. She is the caring wife, and he is the doting, dependent husband. She doesn't rue or complain about the career she could have made had she continued her classical dance training. She isn’t jealous of her next-door neighbour who is progressing every passing day, moving on to a bigger car, and busier schedule. She doesn’t mind taking care of an unwell mother-in-law and doesn’t fret when a party has to be organised within a few hours. But Amrita’s seemingly perfect life is shattered when Vikram slaps her once in the heat of the moment in the presence of family and friends. While most people around her dismiss this as a one-off incident, some, including Amrita’s parents (Ratna Pathak Shah and Kumud Mishra), wonder if this is an indication of what she is subjected to on a daily basis.

Amrita, meanwhile, refuses to move on from the incident.

What does a woman’s selfless submission into a relationship mean? That is the question the film asks as Amrita files for divorce. Things keep getting complicated and messy as she continues to fight for she what she believes to be the right thing.

Pannu's Amrita isn’t the fiery woman she has played in some of her recent films. She is a docile, calm, and yet strong-headed woman who can differentiate right from wrong. Aided by Pavail’s restrained performance, Pannu shines as Amrita.

Meanwhile, we also get to know the women surrounding her, many of who embody prototypes. There is the domestic help (Geetika Vaidya Ohlan) who is beaten on a regular basis that it become almost a daily routine for her. There is Amrita's mother (Shah) who forgets that she has a talent that she could hone, as she has been busy taking care of her husband and family. A lawyer (Maya Sarao) who is overshadowed by her husband’s fame. The single mom (Dia Mirza) who does her best to never let her daughter develop any negative feelings for her deceased father. The girlfriend (Nidhi Uttam) who gives her boyfriend a second chance after he misbehaves.

Co-written by Mrunmayee Lagoo along with director Anubhav Sinha, Thappad is timely and urgent—a reminder of how male entitlement works in daily lives, and how most people just brush it under the carpet. They find nothing unusual when a woman is slapped, or denied her right to choose a profession, and eventually lose her identity as a person.

Sinha, who has made strong statements with his last two releases (Mulk and Article 15), makes the core conflict of his film so insignificant that while his women characters play out well and often take the onus for the larger societal complicity, the male characters are overly stereotypical and mostly freed from the responsibility. One can argue that that is what holds the film together. But the stereotypes, at times, start weighing heavy as the director has failed to create more rounded characters.

Nevertheless, Thappad is a step in the right direction on calling out the deep-seated misogyny that fails to leave Hindi cinema.