The new Love Aaj Kal, like the earlier one, is messy 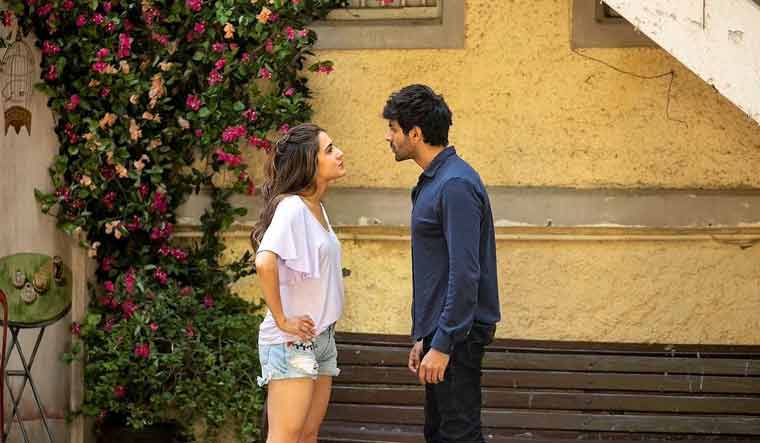 There is a scene in Love Aaj Kal where two young lovers are reuniting after a break-up. The girl is drunk, the boy is sincerely stalking her (now that is wrong, but have the Hindi masala entertainers ever thought about right and wrong). They could have had an emotional moment rife with tension and drama. In fact, there is every effort put in from the actors—Kartik Aaryan (Veer) and Sara Ali Khan (Zoe)— to make it a scene that displays the overpowering control of love. But what it instead turns out to be is a scene high on drama, overacting, and unnecessary idealism preached by the male character.

Imtiaz Ali puts in an effort to recreate the same magic like his 2009 Love Aaj Kal, a film about the emotional complexities of the human mind in two different eras, 20 years apart, with a new set of actors and newer contradictions. But does he succeed? Maybe, partially. The new Love Aaj Kal, like the earlier one, is messy and clings on to the prophetic philosophies, only that these do not translate too well in practical life.

The film begins with two consecutive scenes in 2020 and 1990—of two firebrand girls of the respective eras confronting their stalkers. It soon launches into the present times—to the story of the millennials, and it is as millennial as it can get— claptrap lingo, absurd idea of self-love (Zoe unbuttons her top before going into a meeting to “feel more confident”), and torn between the idea of love and career even if the conflict seems unnecessary.

An ambitious 22-year-old Zoe has her plan to make it big in her profession as an event manager. It is chalked out well, as she mentions in one scene, till she turns 55. The idea of a serious relationship is something that she has kept on hold till she is 27. But Veer shows up early in her life. Something clicks and draws them to each other even when Zoe doesn’t want it to bother her.

A co-working space, Mazi café, run by Randeep Hooda’s Raghuvendra Raj, is the place where the romance brews. And, Raj—a spectator to the romance that is evolving—in turn, becomes the guide for Zoe. He is the “cautionary tale”, he tells Zoe as the film flashbacks to his love story every now and then (Hooda’s younger version played by Aaryan and his love interest played by Aarushi Sharma). Through the retelling of his own romance that eventually ends in tragedy, he guides her, or should we say influences her to an extent that an impressionable young girl is unable to make her own decisions.

The narrative starts crumbling. The filmmaker, often impugned for giving agency to his male characters, is trying hard to give an agency to the woman in this film. But he starts burdening her with the lessons learnt by an older man, and in turn does not let Zoe learn her own lesson or have any agency at all. Even if the complexities of love unfold in two different eras and the gender is reversed in the two stories, Zoe’s decisions are based on the storytelling of the man. The idea to explore the changing expression and meaning of love over time seems overburdened.

The pop-culture reference to Qayamat Se Qayamat Tak and Salman Khan songs from the 90s only makes it worse; add to it the textbook-ish dialogues with emotionless performance and the experience worsens.

Sara tries hard to come across as a strong-willed, independent woman of the current era, but it is forced and at times gets overwhelming. It is a new genre for Aaryan and his sincerity to portray the lover-boy, madly and deeply in love, is let down by overacting in the present era. However, his portrayal of Raghu from the 90s still has some promise. Aarushi Sharma fits the role. But Hooda, who even though not in his best form, is convincing.