The film is directed by debutant Anoop Sathyan 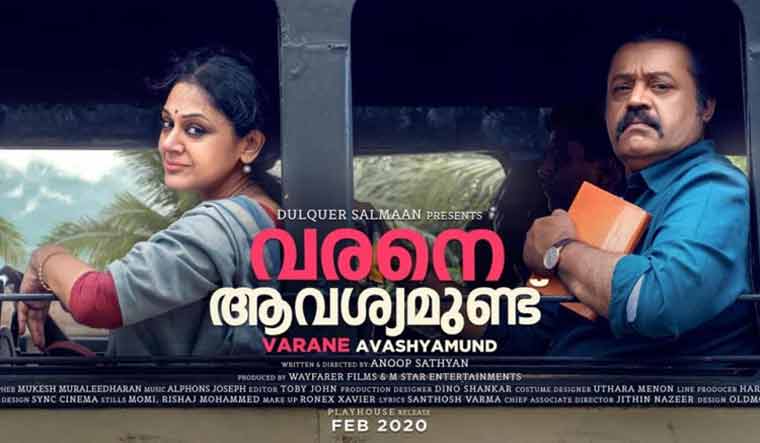 After a long hiatus, Mollywood's much-loved onscreen couple Suresh Gopi and Shobhana are back on the big screen in Varane Avashyamundu.

Varane Avashyamundu merges the stories of a few people living in an apartment complex in Chennai. Neena (Shobhana) is a single mom to Nikitha (Kalyani Priyadarshan). The movie begins with the mother-daughter duo's search for a suitable match for Nikitha. This search brings them in touch with several people and the film ties together the stories of these lives. Suresh Gopi, as a retired army officer, and a street-smart Dulquer Salman come into their lives at a certain point and what happens next makes up the plot of the movie.

Debutant director Anoop Sathyan, son of filmmaker Sathyan Anthikad, has done a decent job with his first film. Sathyan Anthikad’s movies are known for their simplicity which exactly can be seen in his son's Varane Avashyamundu also. The movie is rooted in family bonds and emotions, with a sprinkling of humour—like Anthikad's movies.

The film presents a strong comeback for the 90’s action hero Suresh Gopi. Unlike most of his other movies in which he thrills the audiences with punch dialogues and action sequences, Varane Avashyamundu features a totally different side of the actor—gentle, and often child-like. Shobhana, as always, enthralls with her charm on the big screen.

Dulquer, who also turns producer with this film, has lesser screen space in the movie, but plays a crucial role in the plot. Johny Antony who is placed as a doctor in the movie has done his role well by pulling off the humour. The film also featured other actors like Urvashi, KPAC Lalitha, and Lalu Alex who have delivered their parts well. The climax of the movie was a little disappointing as the director ended the movie in an abrupt manner. Overall, Varane Avashyamundu is a decent, feel-good movie.