'Tanhaji: The Unsung Warrior' review: When current politics dominates a tale from past 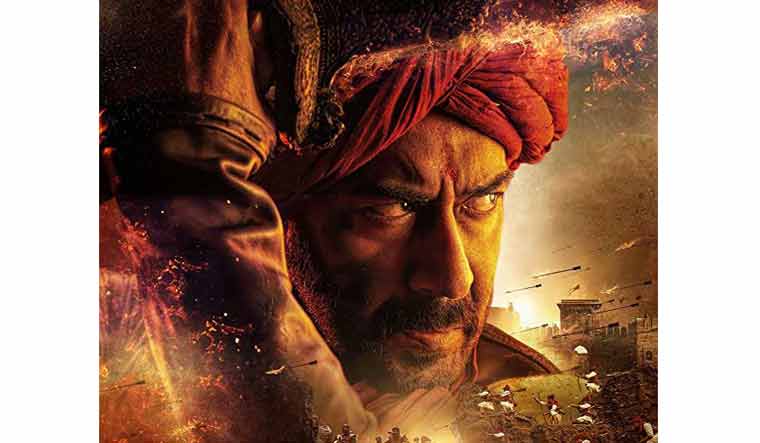 In a season dominated by historical war dramas, one more won’t hurt. It would only add one more chapter of history, one more glorious war fought, in the public conscience. But how the narration is taken forward is what makes all the difference.

In the case of Tanhaji: The Unsung Warrior, it is the political situation of the present times that dominates the storytelling. The storyline focuses entirely on the 'Us V/S Them' narrative and “bhagwa ka parcham” is an often used phrase.

Directed by Om Raut, Tanhaji: The Unsung Warrior tells the story of Maratha warrior Tanaji Malusare of the 17th century. One of the most trusted aides of Maratha ruler Shivaji (Sharad Kelkar), Tanaji fought many battles, but is remembered for the Battle of Sinhagad in the 1670s. And the film begins with this battle.

One of the most striking features, or rather a feature that sticks out the most is the colour coding of the characters. Maratha warrior Tanhaji (Ajay Devgn) wears ivory and maroon. He is righteous and breathes for the country, so much so that he leaves his son’s wedding to fight for the Kondhana Fort. He is a family man, but country is always his priority. Uday Bhan (Saif Ali Khan), a Rajput soldier appointed by the Aurangzeb-ed Mughal Empire stands in Tanhaji’s opposition. He wears only black, has his eyes on a widowed woman, and chomps on meat.

The template for the portrayal of the two empires faithfully adheres to the one seen in Hindi historic war films, including the recent Padmaavat. What has changed is that the Mughal emperor decides to pit a Hindu against a Hindu. There are those odd and loyal Muslim fighters in the Maratha camp, and there are also disloyal Marathas who side with the Mughals. But that doesn’t make much of a difference as the desperate attempt to even out the story is evident. Also, even if Uday Bhan is Rajput, he is speaks the language of the Mughals and swears to kill.

It often reminds you of Ranveer Singh’s Alauddin Khilji from Padmaavat, just that Saif brings his own flamboyance to the character and makes the character believable and despicable. As for Devgn, he isn’t doing slick stunts for the first time. If at times it seems that Singham is travelling to the past, there are also times when his role takes you back to Shivaay where he pulled a few smooth, gravity-defying stunts. While the director positions the film as stylised and action-driven, the existence of such stunts seems unbelievable in the period it’s capturing.

Another thing working in the favour of the film is the chemistry between Tanhaji and his wife, Savitribai (Kajol) although her characterisation is limited. She is only a wife standing by her husband come what may. There is little layering, and she has only a few dialogues. But the two of them together still make those scenes count.

The film has songs dedicated to Hindu deities and dialogues (written by Prakash Kapadia) with a nationalistic fervour. The movie appears to be inclined towards glamorising the Marathas to a large extent, while vilifying the Mughals.